I never thought of having a Cigar Pals brand of cigar, until I went to the Dominican Republic and was first offered the opportunity at Zemis Cigar and Tobacco. Unfortunatelly while I really like their cigars, they are not in my budget at this time. Then I met William Tavarez with Profeta Cigars and became infatuated with Dominican Cigars 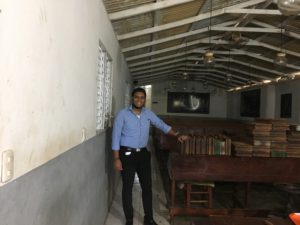 I mentioned this in an earlier post. On our way back from House Blend Cigar we stopped to get some groceries and when we came out, our driver Luis introduced us to William and his wife Anna. We started talking cigars and he told me that he is the marketing director for Profeta Cigars. 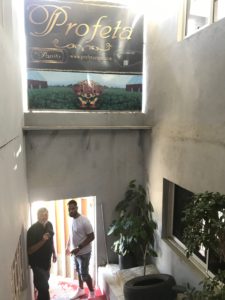 Profeta has been around for a while, but was having some financial problems and brought William in to help them get things back on track.

William is only twenty two years old and was raised to become a Dominican baseball player and even made it to the New York Yankees farm team, before injuries ended his ball paying.

Him and Anna have only been married for a couple of months, but they are both very motivated and carreer minded, which I find to be a breath of fresh air in these two young people.

So Chuck, Did You Ever Think of Having Your Own Cigar…No!

On Saturday morning, William and Saury (the production manager) picked us up to go and tour Profeta Cigars in Tamboril 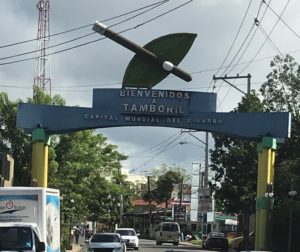 where many of the big cigar companies are located including La Flor Dominicana, 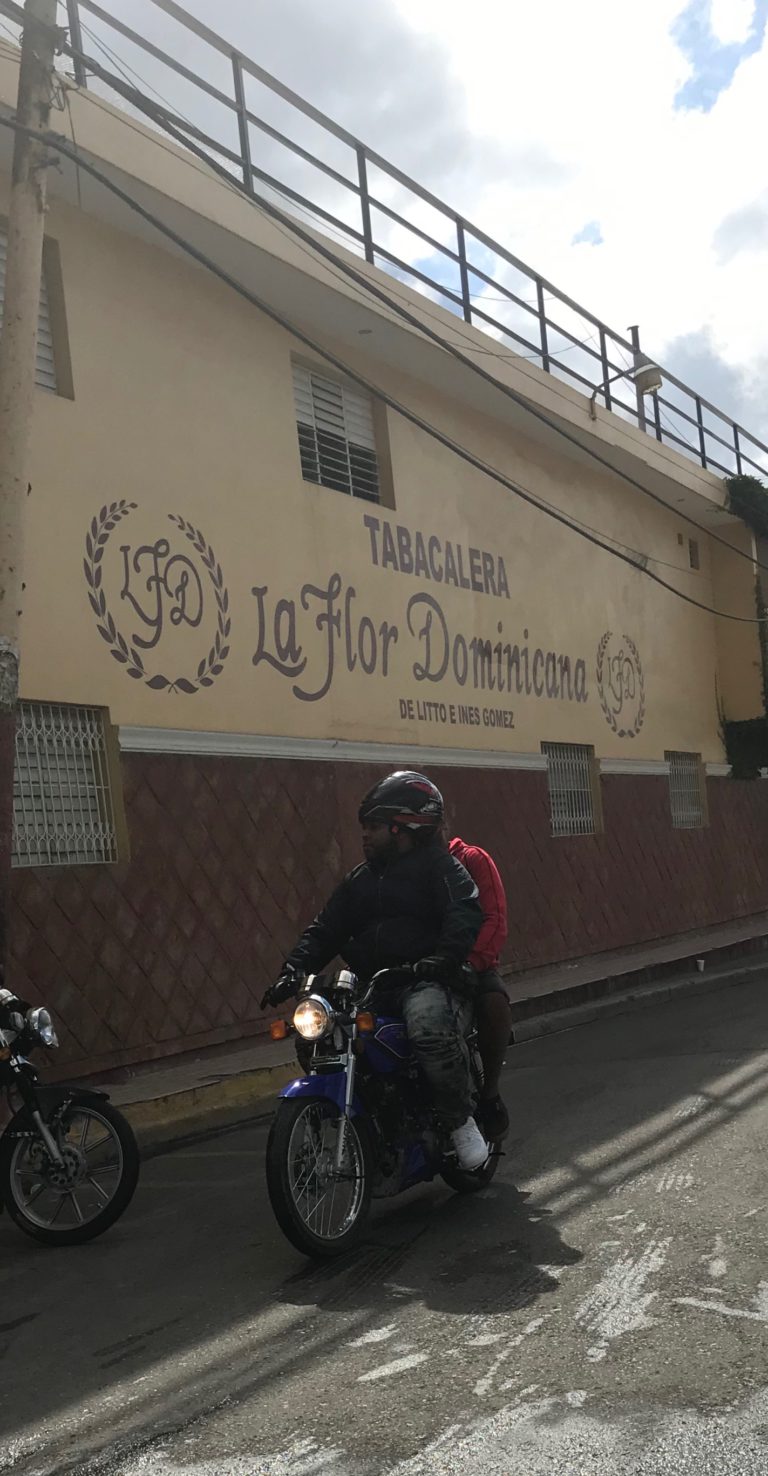 Fuente, and General Cigars, to name a few. We arrived at their shop, which is not real big and located on the second floor of a building in a residentual area. 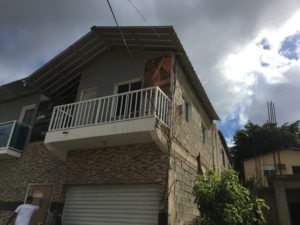 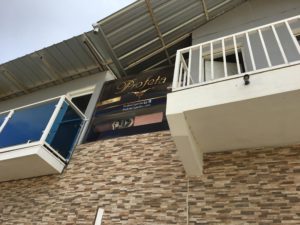 We went up stairs and through the rolling room, which unfortunately was not in opperation at the time, being the weekend. We proceeded to the aging room where there were shelve upon shelves lined with budles of cigars (not packaged bundles like you would see in your local cigar shop, but rather bundles wrapped in brown paper in a pyramid shape) 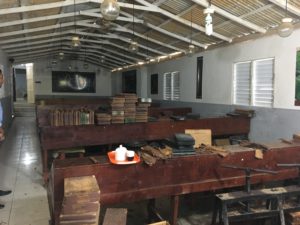 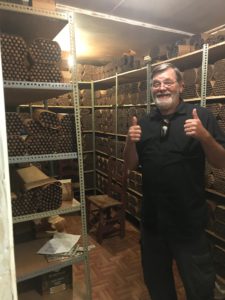 This is where we received our first cigar, mine was a Profeta Maduro and Debs was a Legaro Cafe. We fired em up and then I was introduced to Papito who is the Master Blender and the owner of Profeta cigars. Papito is a very unassuming guy and kinda caught me by surprise when he served us coffee. 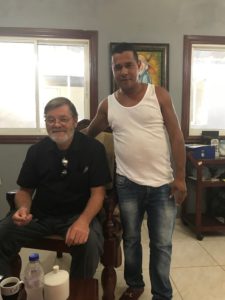 So we all sat down and started drinking coffee and smoking cigars. The cigars just kept comming and thats when they started talking to me about starting my own line. I had not ever thought about doing this but when they started talking to me about prices and my own label, and the cigars that I was smoking were awesome. So I said what the heck, lets give it a try and a new adventure has begun for Cigar Pals

We smoked some more and talked about import laws and prices and such and to my dismay, walked away from several cigars that we had started smoking, this was not easy for me. They have rooms full of cigars and it is no big thing, however I have rarely walked away from a cigar that wasn’t burning my fingers, but they said don’t worry, we got more!

Everyone jumped in the car and we took off for the printer, winding down tight residentual streets, we came to what appeared to just be another house, but when we went in side, we came into a room full of people working on computers and William and Saury spoke to this young man in rapid fire spanish, who barely looked out of his teens and showed him my business card and showed him a cigar band that I liked the shape of.

He turned to his computer and started entering commands and in no time he had my logo up and we were creating a custom cigar band for Cigar Pals, Dominican Cigars. I was facinated as he brought it all together and we would point to something and William or Sauri would translate in spanish and like magic he would make it happen.

In the end we came up with a unique cigar band that I am very happy with, except…. when we got back to the states and were visiting friends and family in Pennsylvania, my friend Paul pointed out that instead of Cigar Pals, we had put Cigars Pals. I could not believe that this happened because we all spent so much time looking at the lettering while we were making the band and we even have pictures that were taken while we were designing it that show it plain as day. So if you have a Cigar Pals band that is mispelled you may want to hang onto it….might be a colectors item someday. It won’t happen again!

Later that evening we were invited to William and Anna’s house where we sat around drinking coffee and smoking Profeta cigars.  I can’t believe how many cigars I smoked in the DR, it was a cigar guys dream come true!

William mentioned that he was learning to play the guitar and I invited him to break it out and proceeded to regail them with songs that I had written. Many of you probably did not know that I write songs and love to share them with people that I meet in my travels. If you read about Chuck you know that I travel on a Harley looking for cigar adventures, but what it doesn’t say is that I cary guitar on that motorcycle and have since I started traveling like this.

William and Anna speak very good English which helped out a lot. William was not comfortable with his ability on the guitar and did not play for us, however we made a deal. He would learn to play the guitar better before our next visit and we would learn to speak spanish better!

We had the opportunity to spend another evening with them when I picked up my cigars at their house and then right before we left, we went to dinner together and they even took us to the airport at 2:00 in the morning.

They are both very young and have only been married for a couple of months, but they are wonderful people with a great work ethic and integrity. I look forward to geting to know them better and visit as we enjoy this cigar adventure that is just starting

The Road Goes On Forever And The Party Never Ends

Thats a Robert Earl Kean line, but aptly describes these cigar adventures that I find myself on. I never cease to be amazed by the people that I meet and the warmth they show. Their is nothing like the passion for premium cigars that I find, especially in the Latin community smoking Dominican Cigars.

If you would like to start your own line of cigars, we would be happy to put you in touch with Profeta Cigars. You can also watch a video of Papito hand rolling a cigar at this link.

Be sure to check us out for the 4th installment of the Dominican adventures!

Feel free to leave comments and ask any questions that you may have below and I will get right back to you.