A few months ago I was in St. Augustine Fl and while visiting  Old City cigar shop in Old Town I ran across Warfighter Cigars. This is a veteran owned cigar company and I was imediately intrigued by their idea for a cigar company.

What Is A Warfighter 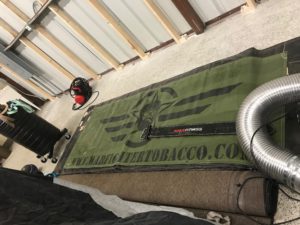 THEY ARE VETERANS, FIREFIGHTERS, POLICE, FIRST RESPONDERS AND ANYONE WHO BELIEVES IN SELFLESSLY PROTECTING OTHERS FROM THE COLD HARD WORLD.

THEY ARE THE SHEEPDOGS WHO PROTECT THE HERD FROM THE BIG BAD WOLF.

THEY ARE A FRATERNITY OF MEN AND WOMEN WHO ARE WILLINNG TO LAY IT ALL DOWN FOR AND IDEA.

Their brochure goes on to say:  WARFIGHTING IS TOUGH WORK AND THROUGHOUT HISTORY, AT THE END OF A MISSION WHEN ONE OF THEIR MEMBERS GOES DOWN OR IT’S TIME TO CELEBRATE VICTORY, THE WARFIGHTER HAS DONE SO WITH A CIGAR IN HAND.

IT IS IN THAT SPIRIT THAT WARFIGHTER TOBACCO WAS BORN

My Dad, My Son and I Are Vets

So how could I not appreciate a company dedicated to those who faught for this great country!

I was on Instagram the other week and I follow these guys and saw a post by Jon anouncing that they were opening a place in San Antonio, TX and I said to myself, hey, I’m in San Antonio, I wonder if I can get an interview? Cause thats what I do….I interview!

So I messaged Jon and in short order was able to set up an appointment to meet with him the following evening.

I want to interject here that, I always love when I am welcomed by members of the cigar community, because that means that Cigar Pals is being accepted in this industry and as we are, the potential grows for us to bring you new and exciting adventures

As we were driving (yes in the car, I promise I will be back on the bike soon) out there, we had traveled across a pretty big chunk of San Antonio and then were heading off into the country and I thought, do I have the right address?

I backed up and pulled in and this tatted, bearded, mountain of a man walked out the garrage door with his trusty companion Kiera, a six year old black lab.

The man was Jon Simons and behind him through the door, I could see two motorcycles under covers, My kind of people! 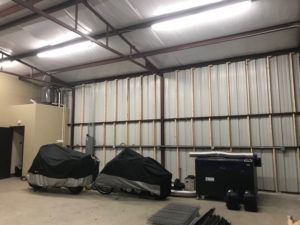 That’s right, we caught them, while they are doing the renovations to get the place ready to open, which is always fun, because I get to hear the vision! 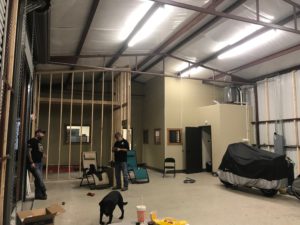 Time To Smoke And Chat

After introductions were made and a little small talk, Jon went to his personal humidor and pulled out some Warfighters for us to check out.

He asked what we prefered and I chose the .50 cal which is a maduro and Deb wanted the 7.62 which has a Dominican filler, a nicuraguan binder and a Indonesion wrapper.  He gave us each a Field and a Garrison which are the two lines they first introduced. Each line has a 5.56mm, a 7.62mm and a .50cal. 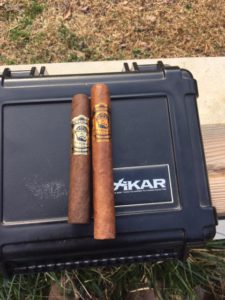 I chose to smoke the .50cal Field, since this is what I had first tried when in Florida. Deb also smoked her Field. we saved the two Garrisons for later and I will do a video review of one or both to attach to this post.

We smoked and we talked about the vision for the new store. They are curently home based in Nebraska, but decided to move down to Texas since it is a more cigar friendly state.

Warfighters will have a large humidor in the back corner of the building and a wharehouse area where they will package and ship their cigars from.

They do a large volume of business in many brick and morter stores throughout the country and are continuously looking for more shops to market their cigars.

They are also working on increasing their online market and have a large following on Instagram and Facebook.

The new shop should be open sometime late in January. The date is up in the air at this time due to some remaining construction work and they are awaiting some permits.

There will be a big Grand Opening probably sometime in March and it looks like its going to be a blast, I was even told that they have a cannon for the occaision!

There is a resturaunt next door that I’m told serves great food and they have a stage for a band that the guys hope to make use of for the grand opening.

So We Smoked and Talked and Smoked

True to form, when I find myself in these situations, smoking with new friends, we find all kinds of things to talk about and this would prove to be no exception.

I mentioned that their were motorcycles in the building and of course we had to talk about that.

Jon rides a 2002 (I think) Harley Ultra Clasic which was under one of the covers (until we decided to take a pic together) (couldn’t think of a better backdrop). I have to tell this story on him: 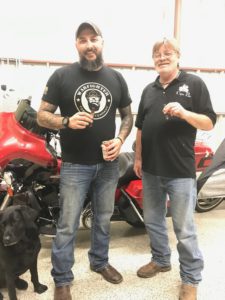 Kiera Jon and me

When he brought the bike down from Nebraska (where it’s too cold to ride at this time of year), he forgot to bring the key, so there it sat, waiting for him to return to Nebraska and retrieve the key, which he would be doing the next day.

I really have no room to talk, since mine is in the back of a toy hauler in South Carolina!

So we talked about bikes and his dog and a host of other things, but as usual the conversation returned to cigars. Their is always more to say on the subject

These guys have only been in business for three years and are off to a great start and I look forward to seeing where they go with this.

Warfighters also promotes other veteran owned businesses, including Black Rifle Coffee Company and will have their coffee available at the new store. 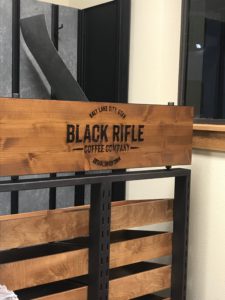 Thanks To All Who Served

Being a vet and knowing many who served, I am proud to be posting about a company who not only is veteran owned, but also works to recognize others who have. These guys strive to bring awareness to the fact that when the guys come home, they need to be welcomed back into society and remembered for their sacrifice for their country.

I recommend giving their cigars a try and encourage everyone to comment or ask questions about this post in the section below.