Deb and I are up in Michigan for a new Nuke job and I a couple weeks ago, I made contact with Smoky’s Fine Cigars in Allan Park, MI and mentioned that we would be in the area shortly.

We arrived during the week end, but there is much to do in a new camp and Deb started work on Monday.

I start on Wednesday, so that only left today, to have cigar adventures. As it so often happens, when I arrived at Smoky’s, I was talking to a fellow cigar enthusiast and he mentioned another cigar lounge in the area and it suddenly became twofer Tuesday for cigar adventures. 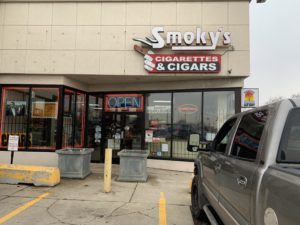 So after taking Deb to work and getting cleaned up, I headed out for Smoky’s. Would have loved to take the bike, but it’s in the Low 40s and coming out of Texas, I am not acclimated to riding in the cold, Yet!

I will be riding while up here, but that trip was about 125 miles and I just wasn’t up for it.

I arrived and was greeted by Frank, who is the owner. Then I myself and gave him my business card, as I always do and briefly explained who I was and what I do. 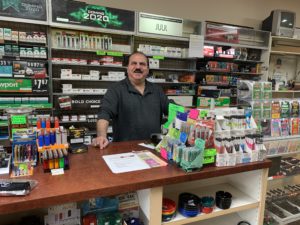 It’s kind of funny the way people sometimes react when I do this presentation, like they think I’m there to sell them something and that was kind of the way Frank acted at first, then after telling him I was going to check out his humidor and would stay and smoke one, he went to make coffee and looked at me and said: 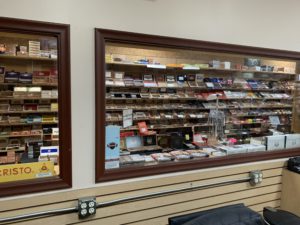 What is it you do? I said: I ride around the country on my motorcycle (most of the time) looking for cigar adventures and then write about them.

That seemed to ease his mind (I was buying, not selling) and he became quite friendly.

I purchased some cigars and we chatted at the counter for a bit and then he invited me to grab a cup of coffee and hang in the lounge.

In the lounge I met a guy named Andy and we talked quite a bit. He was smoking a Last Call, which is a shorter stick with about a 30-minute burn time (he was on a break from work). 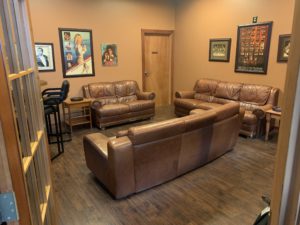 Andy didn’t want his pic taken, that’s him in the corner you can’t see!

I smoked a house blend 6×60 Maduro. Nice inexpensive stick, the draw was a little tight at first, but after a bit, it opened up and turned out to be a pleasant stick.

Something that caught my attention in the humidor, was there were a ton of large Gage cigars. Probably 2/3 of the room had 60, 70 and 80 ring Gage cigars. I don’t ever recall seeing this before.

As with all brick and mortar shops, they have to know there clientele and that’s what they stock.

Anyhow, I was visiting with Andy and he told me about a guy named Rupert, who was the manager at a shop up the road called Casa De Montecristo, which is one of JR Tobacco’s stores and I decided to run up there (another 30 miles) and check them out.

Since I had made that decision, I figured I better get heading that way (I knew it would take some time to get out of there, since I had yet to take any pics and figured I would visit with Frank some more, oh yeah, I also met Kevin, who is the Oliva rep for the area and visited with him for a few minutes.

Then I caught up with Frank again and bought some more cigars that he recommended. He also gave me a Fernandez ball cap. 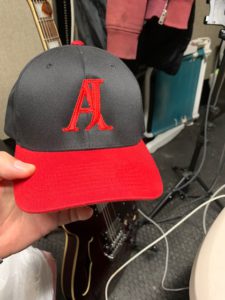 I took my pictures, bid everyone farewell and rolled out of there.

As I walked in, the whole place was a humidor, with the cash registers, counters and small lounge area in the same room as all the cigars. 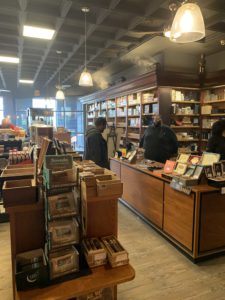 The big guy is Anthony

I have seen this type of set up before in other JR locations and Cigars International.

I walked up to the counter where I met a big ol fellow named Anthony. I asked if Rupert was there and Anthony called in the back for him and this girl walked out, I said you’re not Rupert? 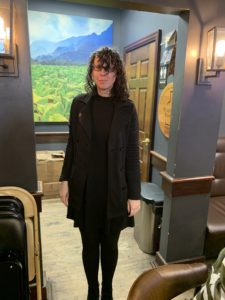 She said no and presently Rupert came out and I introduced myself to them (business cards all around) and told them who I was and what I do.

I mentioned somewhere in there that Andy had suggested that I come and visit them, so I didn’t get the salesman look!

They were all very warm and inviting and we started chatting away right off. I came to find out that the girls name is Lindsay and she has been in the cigar game for about 21 years.

Rupert and Lindsay were smoking cigars and I was not, so Rupert suggested I pick out a stick and we would go over to the lounge area and visit.

I mentioned to him that I prefer a complex cigar and asked if he had a recommendation, he immediately pointed to Lindsay and said that she would be the authority on that, so she escorted me to the Tatuaje display and put me on an Avian Reserva.

At this point I have to give koodo’s to her, because this was an $11.00 stick and quite often when I ask this in a store they find something quite expensive and not necessarily as complex as many less expensive sticks, so THANKS Lindsay!

By the way, I forgot to mention, that this was a nice complex cigar, that I enjoyed (the draw was a little tight at first, but the flavor made it worthwhile).

While visiting with her, I came to find out that the cigar she was smoking was about 20 years old, I was so jealous!

We visited for a good while, talking about likes and dislikes and other such cigar conversation, but I noticed that Rupert was waiting for me and I really wanted to hear his story and not be rude.

In my experience in the wonderful world of cigars, one of the most awesome things about it is the people you get to meet! 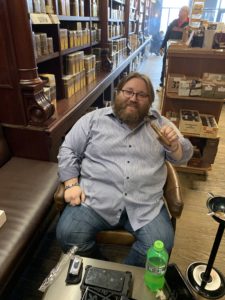 When I go into a place and the staff is welcoming and you can tell that they are really excited that I came in and they want to hear about Cigar Pals and the adventures, that just turn’s something on inside of me and “It’s ON”!

I know this is going to be an awesome cigar adventure and we are going to have fun.

That’s the feeling I got from Rupert from the moment that I met him!

He has a long history in the cigar industry, I believe early on he was working with Smoky’s and then became a rep, for Gurkha and I believe he told me another company that he was a rep for, but I can’t remember who right now, but if he lets me know, I will come in and edit this post.

He talked about his years on the road and that many times he would go back to a cigar lounge that he did business with after hours and hang with the owner, instead of going back to his motel room.

We build relationships with these people we meet and it’s neat how you can travel around the country and know people who are actually happy to see you when ya come to town.

I forgot to ask Rupert how long he has been at JR’s, but apparently it has been long enough that one of his friends came in and gave him one of the Opus X series cigars for his birthday.

Oh did I mention that it was his birthday? It is also Frank from Smoky’s birthday today and Rupert told me that they usually get together and celebrate (probably with a nice stick)

I could go on, but this is getting long. 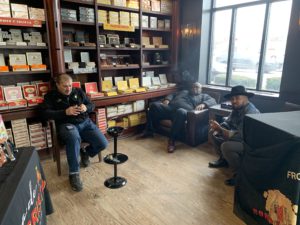 Some guys I talked to on the way out!

One other thing I want to mention….. Anthony! Anthony was kind of quiet while I was there, so I didn’t get to learn much about him, but….

a couple of times, Rupert asked him questions about some cigar we were talking about and he was ready with an answer, so I assume he, like the rest is quite knowledgeable about cigars.

I bring this up quite often, when you go out to get some cigars, allow yourself enough time to stop and smoke one with the folks at you’re local lounge.

You might miss an awesome cigar adventure if you don’t. You will never meet people like cigar smokers anywhere else.

Unfortunately I had to break it off early, cause Deb was at work and I didn’t think she would appreciate me making her walk home from the plant, while I was having my Twofer Tuesday – cigar adventures.

She hates to miss them!

As always, leave comments, suggestions or questions in the section below.

If you take my suggestion and go have a cigar adventure of you’re own, tell me about it in the comment section!