Hi Cigar Pals: This is a cigar adventure that had it’s beginning last summer when Deb and I were in South Dakota.

I had been to all the cigar shops in the Sioux Falls area and while performing a search on Google, I found out that there were some cigar shops and one lounge, south of us in Sioux City, Iowa.

Wanting to check out the cigar lounge called Sherms Smoke Shop, I plugged it into the navigation and off we went. What I missed, is that it is in South Sioux City.

If you are looking for things to do in Nebraska (which I was not, at the time) Then The Dublin House is a great place to check out.

Now South Dakota has no helmet law and neither does Iowa. I obviously did not look at the map close enough and as we rolled into Sioux City (Iowa) the GPS had me hang a right turn off of US29 and across the bridge, right into Nebraska (which does have a helmet law) 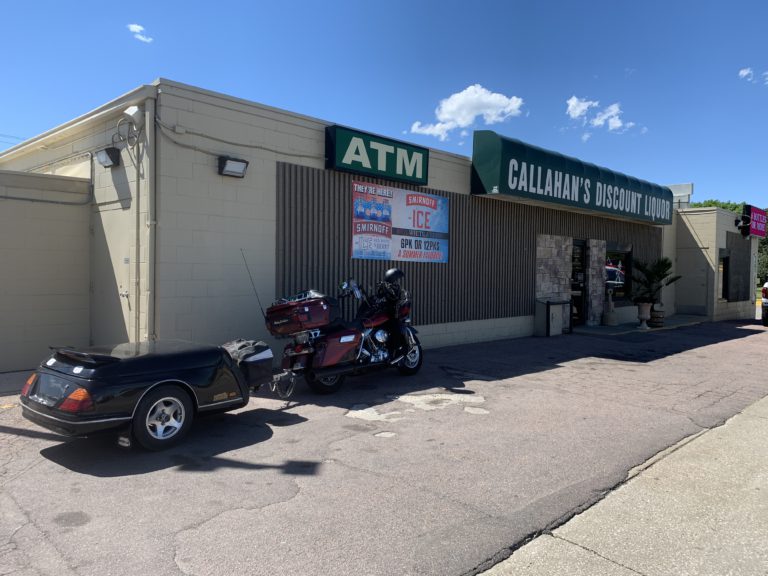 Guess what, I didn’t bring a helmet with me and as we rolled across the bridge and came to the first intersection, there was a police car making a right turn in front of me, but he didn’t see me!

Needless to say, I became a little flustered and I turned around and ran right back across that bridge, like a little girl running from a spider.

Here Is What You Probably Don’t Know

Something else that I didn’t know, is that Sherms Smoke Shop is located in Callahan’s Liquor and when that Police car pulled out, he was right in front of Callahan’s just as you come off of the bridge (remember this, cause I will tell you an interesting story that was relayed to me about this location that happened just recently).

If I had known that that was my destination, I would have risked it and pulled in without a helmet.

Should I, Or Shouldn’t I Stop In South Sioux City

So I am heading south out of Sioux Falls anxious to get back to Deb in Arkansas. I am thinking, OK, I am gonna make one more stop at Millers Liquor in North Sioux City, SD.

Then I’m thinking, no, I want to get down the rode, but wait, I haven’t had any real cigar adventures on this ride, so I came up with a plan!

I would stop at Millers and get some cigars and then call Sherms to make sure they were open (which they were) and I could put my helmet on so that I would be legal when I crossed the bridge and that is exactly what I did!

Welcome To The Dublin House 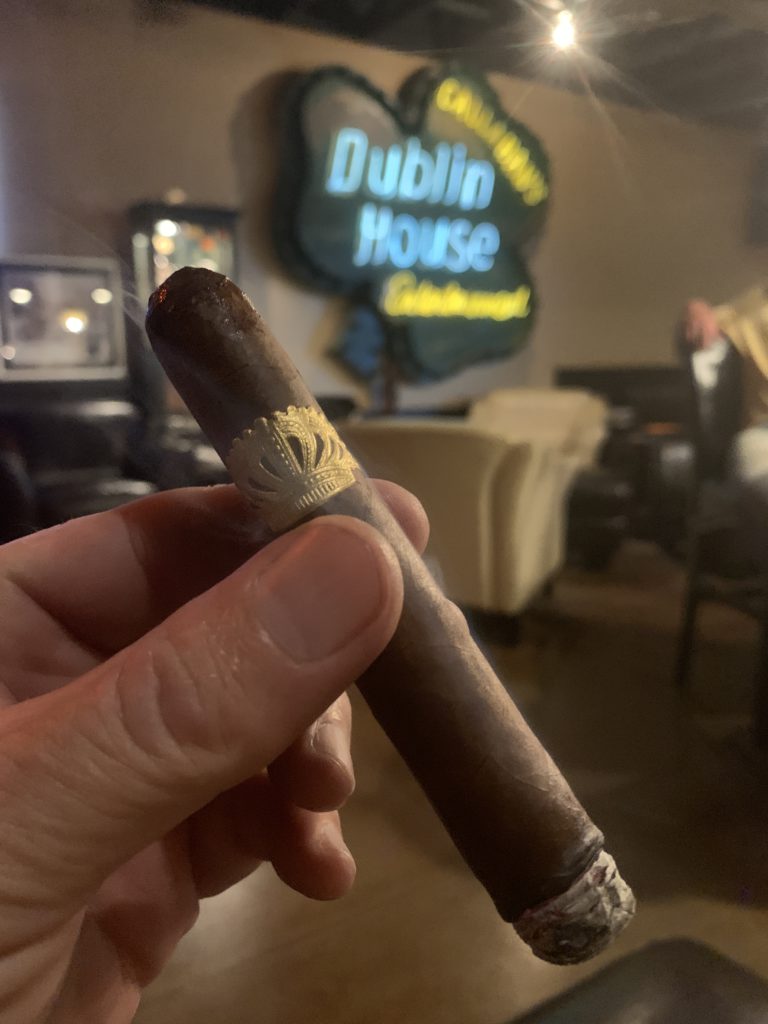 Confused yet? We have three Sioux Cities, we have should I or shouldn’t I stop, now we have:

So I go in and talk to a guy at the counter in the liquor store and introduce myself and explain what I do and he only seems to be moderately impressed and tells me that they have a lounge, but they have a two cigar or $10 minimum to get into the lounge and points to the humidor.

I’m a pretty quick study, so I go into the humidor, which isn’t real big (shoot I forgot to take pics of the humidor) but they have some incredible selections and the smell when I walked in, was heavenly! 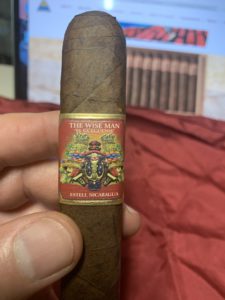 Guess what I found in this humidor, that’s right, a Wiseman, so I will be re reviewing that in the very near future!

Now I am re reviewing, I think I am confusing myself!

There were several other awesome sticks (they even had a Saka Sobremesa) and they had The Super Fly by Oscar and a few others that I felt like I needed.

So I rushed back to the counter, to tell the guy about the treasures that I had discovered in the humidor and ….. he was like, that’s nice, cash or card?

Then he said, I don’t know a lot about the cigars, but the owner and some other folks are in the lounge and they know all about cigars. Yay! 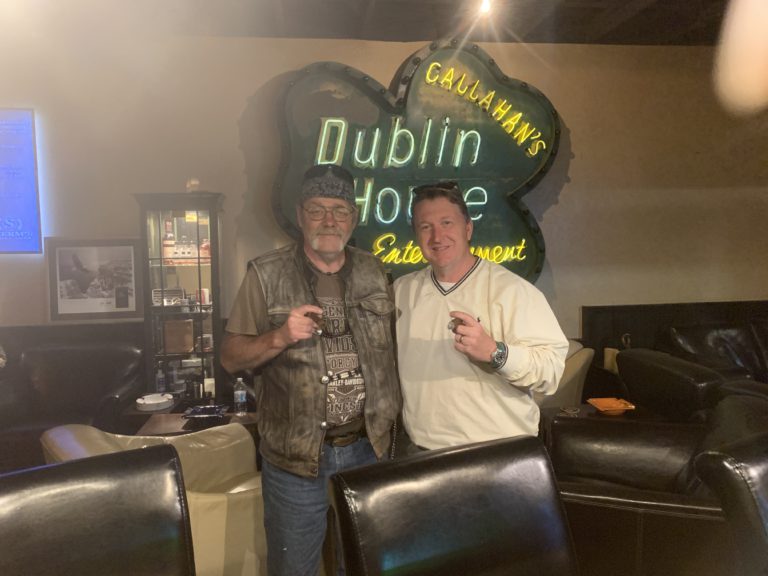 So I rushed on back to the cigar lounge and the first thing that caught my eye, was this huge wooden door and the handle was a double barrel shotgun, that was so cool! 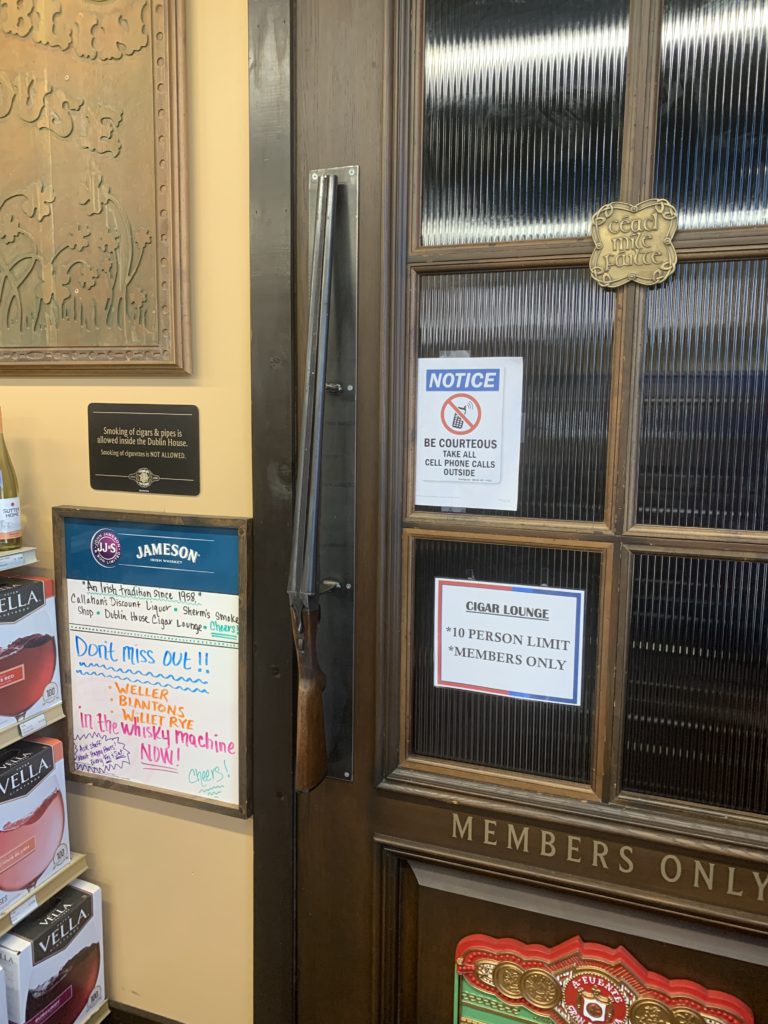 I went inside and sought out the owner (I might have said, which one of y’all is the owner?) who turned out to be the guy, I couldn’t see, because there is a bar that blocked my view.

I encourage y’all often to visit the lounge and meet the folks in there, but for those who have never seen me in a cigar lounge, it is a sight to behold!

I am like a kid on Christmas morning and everyone gets to enjoy my enthusiasm. This was a classic Cigar Pals entry, within seconds everyone knows who I am and what I do.

I was making my introduction to Shennen and right away him and those close by agreed that this is a neat endeavor and they shared their enthusiasm for Cigar Pals and welcomed me to The Dublin House.

I praised Shennon for the incredible selection of faces in the humidor and told them (Shennon, Jennifer, Blaine and Curt (Shad had not arrived at this point)) about the treasures that I had found in there. 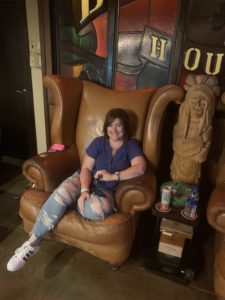 We chatted and I was telling them about the fact that I often forget to take pics and notes (as I was taking notes) and how Deb usually has my back on this stuff, so I get to play and not be bothered about such trivial things. 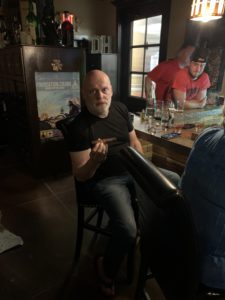 Then I got my picture taken with Shennon in front of the Dublin House sign.

I also mentioned to them that I have a new blog called Guitars and Cigars and told them about that and Shennon asked me if I was going to be around a while and I explained that I needed to get back to Arkansas, but that I would be coming back through next week and he invited me to bring the CBG in and jam some, so that’s what I will probably do. 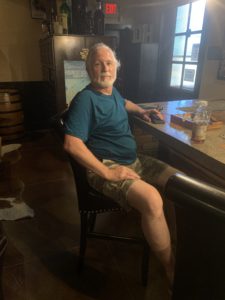 He had a meeting he had to get to and had to leave, but assured me that he would be reaching out to me and guess what, he did and once again invited me to bring my cigar box and play some, so, while it wasn’t my plan, we actually did our first live performance of Guitars and Cigars  at the Dublin House (Sorry Rich at The Cigar Shoppe in Ellwood City PA).

After Shennon left I chatted with Jennifer and Blaine and by then Shad had arrived and we sat around smoking and visiting like we were long-lost kin and had a grand time (I did, I’m pretty sure they did too) 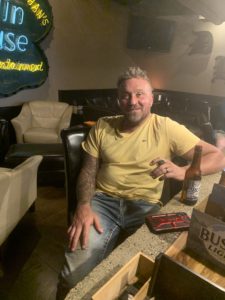 He is actually a retired 20 year veteran of the South Dakota Highway Patrol and we did talk about SD gun laws and a few other things.

Shortly thereafter Jennifer and Blaine had to leave, so that left Shad and me …. and the quiet guy. I enjoyed talking with Shad about several things, not the least of which being that he was smoking a Super Fly.

When I first met him, he asked if i had tried one and Shennon, told him that I had one in my bag and i mentioned that I had reviewed that cigar and really liked it.

This Was A Grand Cigar Adventure

After all these months of Covid and no one being able to congregate, I really enjoyed having a real cigar adventure.

I almost forgot to tell you:

During the recent unrest in the inner cities, I guess they were having some unrest in Sioux City Iowa and the South Sioux City (Nebraska) Police congregated in Shennon’s parking lot at the end of the bridge, because they were under manned, they didn’t want to take a chance on them getting beyond the bridge if they came across.

They asked him if he minded them being there and he was like, nope! Rioters have a tendency to trash liquor stores, but they weren’t likely to try one with a bunch of police in the parking lot.

I guess Shennon was out there handing out cigars to the police and he had stickers made up, that I will include a pic, but I can’t remember what it says right now and its in the bike. 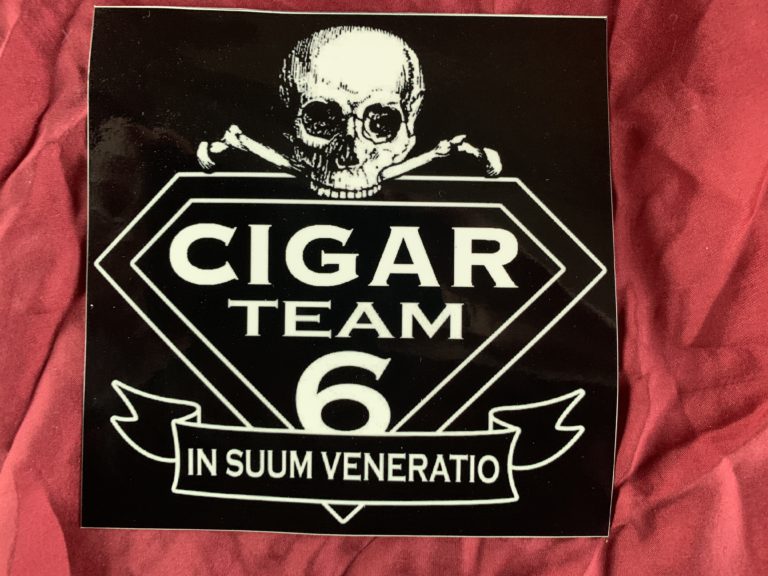 So, if you are looking for things to do in Nebraska and you are in South Sioux City,  check out the Dublin House and have your own cigar adventure.

Feel free to leave comments, suggestions or questions in the section below.