On the way back from the Barn Smoker in Lancaster PA, my exhaust came apart and being in eastern Pennsylvania, I had little to no resources to draw from to get the issue resolved.

I made the decision that I would return to South Carolina, where I know a lot of people who could help with the issue, so officially this is where ” The road to Sturgis” begins

Someone suggested that I use JB weld and Heat wrap to temporarily repair the bike for the ride down south. I did this and it really looked pretty, but the ride over to the Barn Smoker, blew that idea out of the water. The pipes got too hot for the JB Weld and it disintegrated and the heat wrap came apart.

OK, heat is the issue…. So I found some other JB Weld stuff that went to 800 degrees, applied it and set off for the Carolina’s.

About 100 miles into the trip, that burnt away and I was left with my exhaust hanging by tie wire (very loud and hot and not good for the motor) 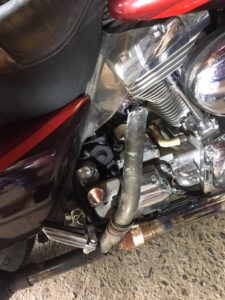 I donned ear plugs and resumed the ride!

Down by Radford VA I pulled off the road because I received a trouble light, which surprisingly had not come on until then.

While looking at my trembling scooter, two other bikes pulled up and shortly thereafter I got to talking to the two guys and a gal about the busted exhaust.

I came to find out that the three where Chuck, Wendell and Britney (you can figure out which one was the girl) 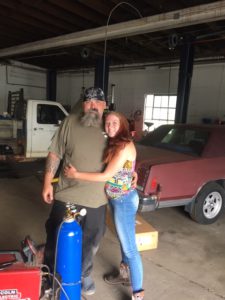 Wendell stood there staring at it for a bit, then he said, I think I can weld that up, I said really and he said, I don’t know what I can do with the bottom, but I know I can re connect the top, which is where the danger to the bike lies, because on deceleration it sucks cold air in and can burn the valves and cylinder heads.

He said he had a shop about 20 minutes up the road and if I wanted to follow him, he would be happy to do it.

I followed him to his shop and it turns out he is an exhaust specialist so this was right up his alley. 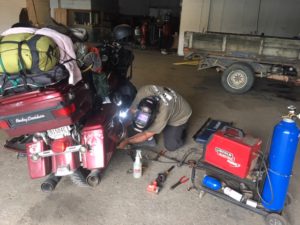 He welded it up while I chatted with Britney and had me back on the road in short order. He did an excellent job with what he had to work with and his efforts made it possible for me to make it to South Carolina that night where I could do some major exhaust work. 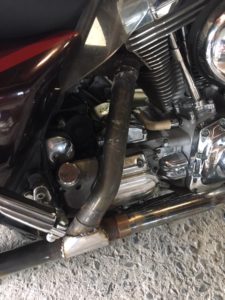 By the way, I didn’t do anything but smoke a cigar and watch as the master plied his trade!

I made it down to Harley Hedricks place that evening just after dark where he had a garage with a lift and had made arrangements for me to pick up a new exhaust manifold. 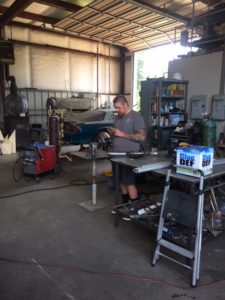 Harley at the fab shop

Interesting side not about Harley is that I barely knew him before my friend Rebel passed away. Harley and his brother own a Pizza shop called Two Bros‘ in Easley SC and Rebel had taken me in there and introduced me to Harley, but I really didn’t know much about him. 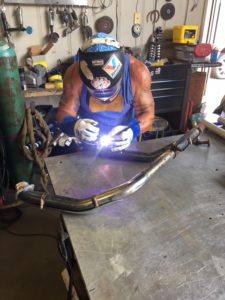 During the course of all that went on after Rebel passed, I got to know Harley better and when I posted that my exhaust came apart he set the wheels in motion to get the new manifold by contacting Philip Jones and helped me out with the fabrication (to turn it into a two into one) 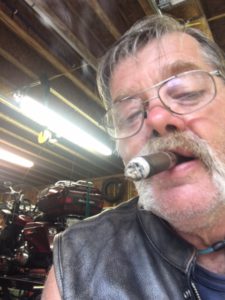 While I had the exhaust off of the bike, I also went in to check and change the cam chain tensioner. 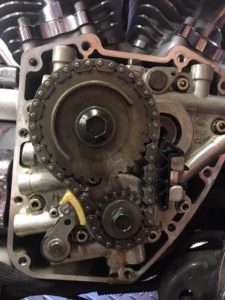 Harley has a nice house on a lake and one of the pleasures of being there was that I could sit out on the dock and smoke a nice cigar while enjoying a cup of coffee. 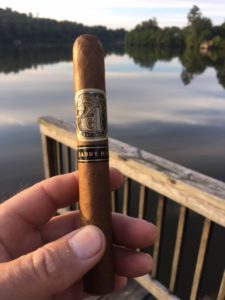 We got everything put back together and off I went down the road to Alabama, via Tellico Plains TN. and Cleveland TN 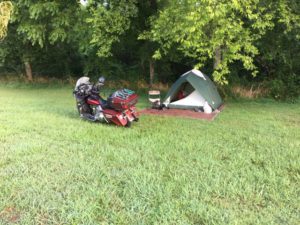 They have some really nice tent camp sites as well as some small cabins you can rent. Great bath and shower facilities and the prices can’t be beat.

I also stopped by Williams Tobacco Shop at 2509 N Ocoee St. Cleveland TN where I stocked up for the rally at Sturgis. The prices for cigars around Sturgis are pretty steep, so I always try to stock up before I go.

Next Stop: The Cigar Shoppe and Doug Theal 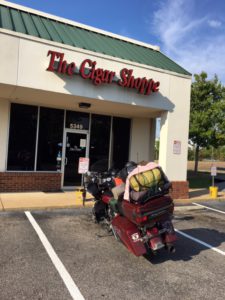 Next I rode down to Montgomery, AL to visit with my friend Doug Theal, who is the owner of the Cigar Shoppe in Montgomery.

This was out of the way, but the first time I stopped there, the first this Doug said as I handed him my business card was I know who you are, where’s your bike?

I was on my way to Texas to renew the registration on my truck, so didn’t have my bike. We stopped again on the way back and you can read about that adventure on the blog.

The next time I stopped was on my way back from Texas after I bought the new Road Glide and the bike was on the trailer, another embarrassing moment.

So I just had to ride down there on two wheels, to redeem myself as a biker (Doug Rides)

So I got there and stopped by the shop and smoked some cigars with Doug and he invited me to stay at his place, which has pretty much become the norm. 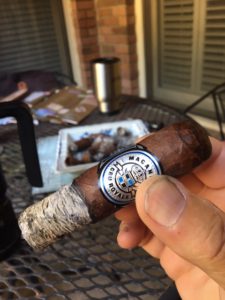 While at his house, I wanted to see if I could get the cruise control working on the bike (another ongoing issue with this bike) and we discovered that not only did I have an issue with the cruise but my tail lights and break lights where not functioning.

We tracked down the issue and tried to fix it, but the kid I had purchased the bike from had done a bunch of jack leg wiring and the problem was beyond our capabilities at the time. 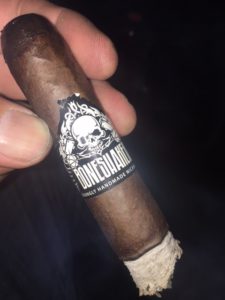 While there we smoke a lot of cigars, some I purchased, but many where given to me by Doug. He also made sure that I had plenty of cigars to carry me through the Sturgis Motorcycle Rally. 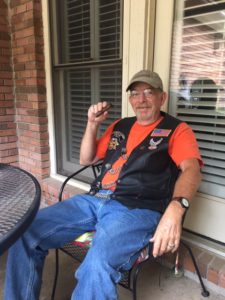 I needed to get to Sturgis and decided that I could probably find people and resources to fix my ailing motorcycle in Sturgis.

I have to tell you that I am not a get up early and ride kind of guy. I prefer to have my coffee and a stick in the morning to get my head right for the ride and Doug is the same sort of guy, so we sat around smoking and drinking until late in the morning on the day I left. Then Doug rode with me for several miles on the ride out Montgomery.

After leaving Montgomery I headed for Arkansas and my friend Scott’s. This would be a long day, which became even longer. I stopped for gas in West Memphis and proceeded toward Scott’s in Shirley, AK.

The next time I stopped for gas, about 50 miles from Scott’s place, where he had a steak and Salmon dinner waiting for me, I realized that I had lost my wallet in West Memphis, so I phoned Scott to let him know what happened and headed back.

I called Scott to let him know and since I had no ID, I couldn’t rent a hotel room, so I decided to head for Scott’s place. He offered to hook up his trailer and meet me. At first, I declined, but 50 miles later I called him back and accepted the offer.

He was waiting for me at a truck stop and had the tail gate down and I rolled into the parking lot and right up into the trailer. 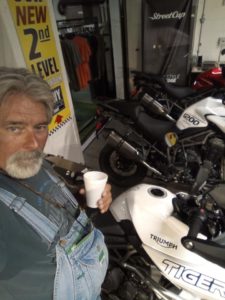 While at Scott’s, he offered to let me work on my ailing electronics and was a great help, performing some mechanical voodoo that allowed me to finally have my lights working and cruise control. 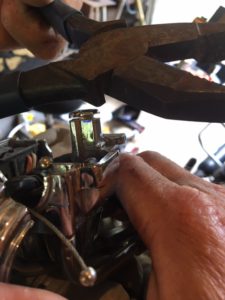 Alright, all system go and off I went heading for Sturgis and about 20 miles up the road, my speedometer sensor which had been causing some grief, finally gave up the ghost

Guess what, no cruise control!

So I headed across Arkansas and made it to Brownsville NB. They’d had a lot of flooding there and there where lakes, where there never had been on previous visits to that area.

I was able to locate a free state campground and set up for the night, beautiful lake and plenty of trees and I had the place all to myself (this happens a lot at free places, guess folks just want to spend there money).

I was unable to keep track of the miles that I rode on the road to Sturgis, since another problem with this bike was that my trip meter was broken, so I can’t really tell you how many miles I rode.

I really can’t even guesstimate how many cigars I smoked

All I can tell you is that it was cigars and Harleys all the way on the road to Sturgis!

Please feel free to ask questions or comment in the section below.