Today we are reviewing the Aging Room Quatro, rated by Cigar Aficionado as their number one pick for Cigar Of The Year in 2019.

Aging Room has been topping the ratings for non-cuban blend since 2013 and after smoking this stick, I can see why.

In the world of cigars, a cigar that is blended completely with leaves from one country is a Puro! So if all of the tobacco in a cigar comes from, say Nicaragua, then it would be a Nicaraguan Puro, the same for Cuba, Dominican Republic or Honduras.

This is a Nicaragua Puro!

I will be posting a video shortly of my review of the J C Newman American Puro soon, it being the first 100% American grown and made cigar in several decades.

Let’s talk about the Aging Room Quatro, just so you know, the Quatro Maestro is the cigar named by Cigar Aficionado, but to the best of my knowledge, the only difference is that that one is a Torpedo (6×52)

The one I smoked is the Vibrato (6×52) which is a Toro. This is a F55N, not to be confused with the F55, which is a totally different cigar.

Everything I found indicates that it is the same blend and at Cigars International it is categorized with the Maestro and is also back ordered.

Boutique Blends Cigars was introduced to focus exclusively on the production and distribution of boutique brand cigars, including the Swag Puro Dominicano and the Aging Room Small Batch Cigars.

Click the Pic to get your Aging Room Quatro 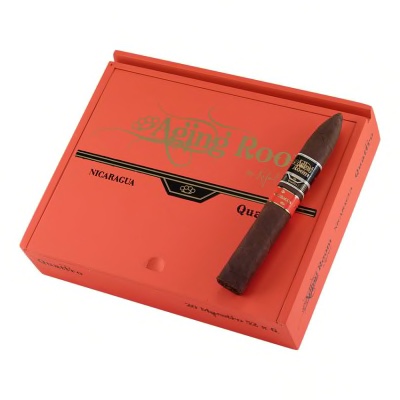 Boutique Blends is a laboratory for the introduction of new and exciting blends to meet the ever expanding palates of cigar smokers in the USA and around the world.

“We are not producing cigars for everyone. We are introducing new blends for educated consumers that are looking for cigars with complexity and character.” Rafael Nodal

(I grabbed this from their site)

Burn: Good burn overall, canoed a bit and had to touch up twice.

Draw: Just a bit tight, but not bad

Notes: This was a very enjoyable stick. I don’t believe you can beat it for the price (right around the $10 range). I rarely find a cigar this complex.

A little side story:

On a side note, several years ago a little company called E P Carrillo had a cigar called La Gloria and Cigar Aficionado was just starting out and they named the La Gloria, Cigar Of The Year.

At that time Carrillo was a small boutique company and was not able to meet production, with orders on back order up to 12 months.

Carrillo sold La Gloria to General Cigar and pretty much flew below the radar, until 2018 when the Encore, was named Cigar Of The Year.

Aging Room considers themselves a boutique company and I hope that they can meet production needs.

Without a doubt the Aging Room Quatro is a cigar that I will try to smoke on a regular basis, if I can find them. Since they were named cigar of the year by Cigar Aficionado, I’m sure they will become hard to find

I highly recommend this stick and believe that I would rate it around 94, just because of the burn issues.