Well it’s the 2019 Sturgis Motorcycle Rally and you may be wondering where to find Cigars or since the rally is over, you may just want to hear about the adventure and the places that have cigars in the area, every year.

Cigar Pals, new and old at this year’s event 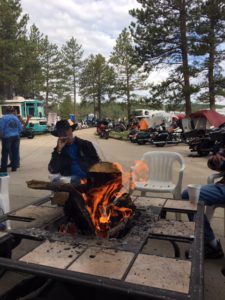 We all return to the same private ranch each year and sad to say that this was the last year. The owners who have graciously hosted us year after year (20 to be exact) have grown older and Wayne had to put Caroline (one of the sweetest ladies I have ever known) into a home as she has dementia and he has sold the ranch. 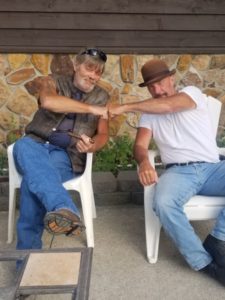 Bob Murray and Me

So this year was bittersweet, we got to return once more and renew acquaintances, but this will be the last time at this place.

There is a fire place where many of us sit and smoke and visit in the course of the day. Some of us don’t get very far from this location and I think that due to this being the last time, more so than usual. 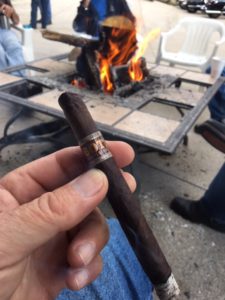 While during other rallies, most take off for day rides, many skipped the rides to visit with old friends.

Several have their pics on my Pals page who were once again there and I made some new cigar pals this year and will post their pics in the days ahead.

While in camp, I kept hearing about some folks who were hand rolling cigars out at Black Hills Harley Davidson, and thought, I need to check this out.

Deb and Trace and I decided to ride into Rapid City and check it out. I found them right away, but was not expecting what I found.

Just outside the main entrance I found the cigars, but the folks who were manning the booth were members of the Gold Star Ride Foundation a group dedicated to helping the families of serviceman and women who made the ultimate sacrifice and laid down their lives for there country. 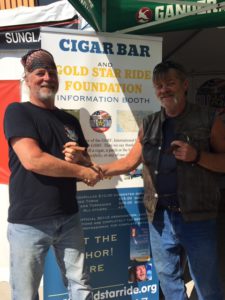 Tony Price and Me

I met Tony Price and Scott Maxey and found out that Tony’s wife who is from the DR (Dominican Republic) hand rolls cigars. These cigars can be yours for a donation to the cause. Due to the laws surrounding Cigars they use this donation process and I don’t know all the details surrounding this, but you can go to there website for the answers.

I had a good time talking with Tony and Scott. Tony is a disabled Navy vet (my branch of the service) and Scott served with the teams for many year’s (you can also read about them on the website).

The financial help that they provide for the families is delivered via motorcycle by Tony along with a nice plaque from Gold Star Riders.

Maybe some time in the future I will have the opportunity to accompany Tony on one of his rides.

Big Adventure At The Tinder Box 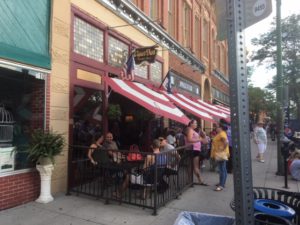 One of the high points during the rally this year was when we stopped by the Tinder Box in Rapid City, SD to revisit Chris and Caroline (the owners). 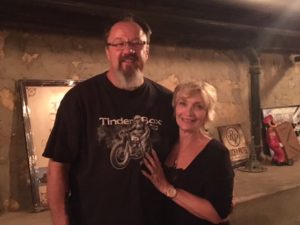 I first encountered Frisker (their dog and mascot) and Caroline. In short order Caroline told me that Phil Zanghi of Indian Motorcycle Cigars (yes Indian Motorcycles) was there and I should go over and introduce myself. 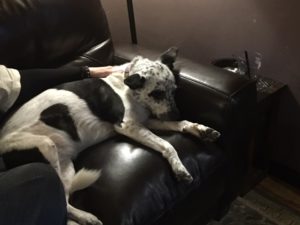 Well of course I did and I got to spend a good bit of time with him. Phil is a very charismatic individual and blends some incredible cigars, most notable being his Debonaire Cigars. 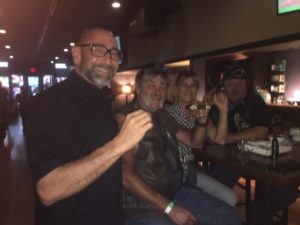 Phil, me, Deb and Trace

Another reason I was anxious to meet Phil, was that he is the blender for Bryan Musards Cattle Baron Cigars, which I had reviewed and was scheduled to meet with in Dillon Montana to talk about his cigars and how a cattle baron becomes a cigar manufacturer.

Phil assured me that Bryan was the real deal and a great guy and thus increased my joy at being able to go to Dillon and interview him.

Next up…. One Eyed Jacks

We next visited the humidor at One Eyed Jacks in Sturgis. I have been going into Jacks for several year’s, long before Cigar Pals and this year was no exception. 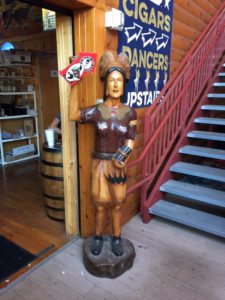 I always like to see who’s behind the cash register and especially get a kick out of the cigar girls who cary their cigar boxes around Jacks offering cigars and cigarettes to the customers. 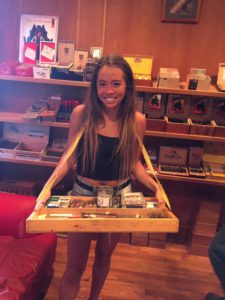 They are always beautiful and take me back to a time long ago, before the EPA stuck their nose into the cigar industry. 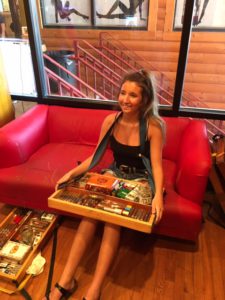 This year I met Tony, Delane and Alexis.

Tony informed me that this year’s top seller was the Drew Estate Java….not one I prefer, but to each their own!

No Sturgis Rally would be complete without a visit to the Deadwood Tobacco Company. 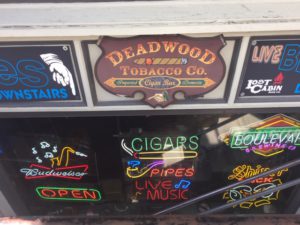 I found this on their website last year: Our building is 110 year’s old, with Chinese tunnels, and a glass sidewalk to light them. We also have the original Deadwood jail (the only jail that serves beer!). Our basement was originally a barber shop and Turkish bath. The back stairway led to the 2nd floor of the entire block where the whore houses were located (they called them cat houses here) so guys would go in the front for a haircut and sneak up the back way and get taken care of. We’ll do our best to take care of you (though don’t be looking for any special favors like that!)

Before I close, I have to send out a big thank you to my friend Doug Theil, owner of the Cigar Shoppe in Montgomery, AL.

I talked about Doug in my Post “The Road To Sturgis” and during the rally, Doug called and asked me how my cigars were holding out. I told him that I had smoked more than anticipated while in Arkansas at Scott’s and he said “we can’t have you running out during the rally and he sent me a care package! What a great guy!

So that conclude my cigar review for the Sturgis Motorcycle Rally. I hope you now know where to find cigars if you attend the rally in the future.

You can always call Doug or Stop by Marvin Williams place in Cleveland, TN

I welcome any comments or questions in the section below.