To tell the truth, until last week, I didn’t even know who Steve Saka of Dunbarton Tobacco and Trust was. While at the Lechon Challenge in Miami in November, I met a guy who told me about a cigar bar in Weston called Smoke On The Water.

So when we came down here to work Turkey Point, Deb reminded me of his recommendation and we decided to stop in and check them out.

When we got there and went into the humidor I asked the guy waiting on us if they had any events coming up and he said yes, that Steve Saka would be there this Friday. He also informed me that if I preordered a box of Steve’s cigars, I would be allowed into the VIP area and have an opportunity to meet Steve.

He Showed me what Dunbarton sticks they had in stock and I ended up with a box of Muestra De Saka and that’s what I am reviewing in this blog post. 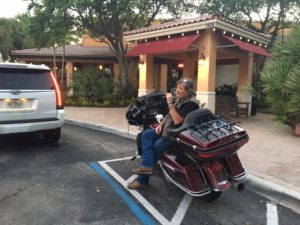 As we were getting ready to go to this event, Deb asked if I wanted to take the truck…. No, I said, cause Cigar Pals is a guy who rides around the country on a motorcycle having Cigar Adventures!

So we blasted up the Florida Turnpike….until we couldn’t blast anymore, cause we were stuck in rush hour traffic!

I got us off the turnpike and found some secondary roads to cut across country and arrived promptly at 5:00 pm, the event was scheduled to start at 6:00. No sense being late!

We pulled up on my big hog and found a parking spot right up front, not sure what all those lines meant, but it sure looked like motorcycle parking to me.

Radio blasting and hair blown back, I’m sure we made a great first impression, walked in bikerly (is that a word) both wearing Cigar Pals shirts, cleverly hidden beneath our cuts!

Quick Robin, To The Humidor

We made a beeline for the humidor, cause ya just gotta have something to smoke in a cigar bar! 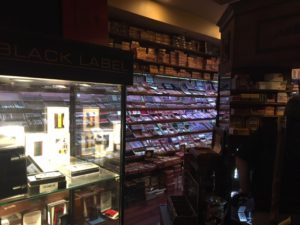 When we walked into the humidor, Nicholas, who had helped us out the first time we were there, recognized us and called me by name…. Mr. Wimer and pronounced it wrong, which most do, so I just asked him to call me Chuck…. Just Chuck, that’s what I am going by now, Just Chuck, not really Just Chuck, but Chuck…. you get the picture. 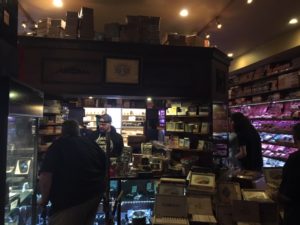 Moving right along, we shopped around and found some nice sticks. I came in search of a Sin Compromiso, which I had heard Steve and Nick Jimenez of Cigar Snob talk about on a pod cast earlier in the day, by the way, I will soon be doing a Cigar Pals podcast, and will let you know when I begin.

When I found them and looked at the price tag $18, I thought OH! But then I thought, what the heck you only go around once in life, why deprive myself of a nice cigar over a few bucks. 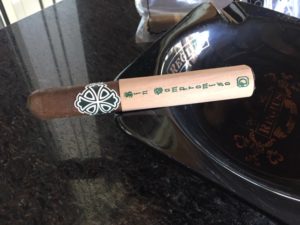 We went out to the veranda, that’s like a patio, for those of you who don’t speak French, and I ordered a Cuban Coffee and sat back to try out this new cigar.

Right away, I loved it! Something that Steve does with his blending that impressed me, is that even in a medium to full flavor cigar, I find them smooth and creamy, which I soon found out can be deceptive. 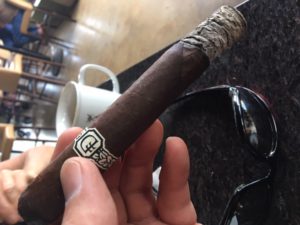 I immediately decided that I needed to do a review of this stick and went back in and bought two more (are you doing the math). You always want to have at least two sticks when you plan to do a review, because you can always get a bad stick and you don’t want to find yourself reviewing a bad stick, when you know that these are great cigars.

Now for the deception that I mentioned, Did you ever drink an alcoholic beverage that tasted soo good and was sooo smooth you thought, wow, I could drink these all night, only to find out that when you stood up, you fell flat on your face? Well this cigar is kinda like that!

I had smoked about 3/4 of it and suddenly realized that it was kicking my butt!

When Steve showed up shortly thereafter and I went into the humidor to meet him, I was holding an unlit cigar, waiting for the effects of the first one to wear off. 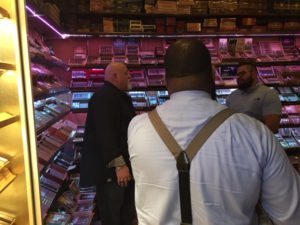 Oh, (by the way) The cigar I will be reviewing in the video that will be on this post is not the Sin Compromiso, I will do another post for that one

That will be a Muestra De Saka, muestra means “sample” and after doing the review, I found this out and it also means that I did a review of one of the samples (a #5 I believe) and they all come in those little boxes and are labeled the same, but the blend is not the same!

I Got To Meet Steve Saka

Well I finally got to meet Steve Saka after all this time, actually I didn’t know who he was until the first time I walked into the humidor at Smoke on The Water and Nicholas told me about the event.

When he told me that Steve previously worked for Drew Estates and that the Liga Privada was his baby, I perked right up, because the no 9 is one of my favorite cigars and I knew that if he was involved in that, then I definitely needed to try out some of his cigars.

Deb and I both enjoyed talking with Steve, as he is very down to earth and unassuming. He spoke with passion about having the freedom to create what he likes the way he wants to and I want to tell you about what he has done with the Sin Compromiso to give you an idea of just how passionate he is about his blends.

The farmer who grows the leaf for his filler, is asked to cut away about half of the leaves of the plants to make the leaves that remain much better. Steve understands that by doing this the farmer loses 50% of his harvest capacity, so he pays the farmer full price, so he doesn’t lose anything and Steve only get’s the best Tobacco for his cigars (everyone says they only use the best, but Steve really goes the extra mile.

Steve talked to us about his latest project: the Muestra De Saka Lancero, which is a 38 ring gage and very difficult to consistently manufacture and caters to a limited group of smokers who will buy them, but they tend to smoke one or two and the put them in their humidors like trophies and when all of those smokers have got them, they probably won’t sell a lot after that.

But Steve wanted to make a true Lancero like they did 30-40 years ago and only use the same type of leaf throughout.

We Talked About Our Military Service 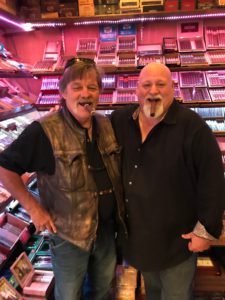 Being a veteran, I always like to talk to fellow vets and I had learned that Steve had been in the Navy, which is the branch that I was in.

We talked about how the pay has changed since we were in and it really is great that our service members are able to make a decent living now adays. Steve says that when he got out he was making $13,000 a year and I believe I was making less than that in my time (yeah, I’m a little bit older than him)

I think that Steve started smoking during his Navy days (don’t quote me on that though, cause I can’t remember where I heard that.

Smoke On The Water

Smoke on the water, and fire in the sky. oops, ran off on a tangent. That was a popular song in my youth, which was long ago and far away.

This cigar lounge is in Weston Florida and is in a corner lot in an upscale shopping area. There is what appears to be a long lake running beside it, obviously that’s where they got there name from.

You can actually enter the place from three sides through a finely porticoed and manicured landscape, which brings you into the bar area. If, you go around to the actual front of the building you enter through the open air seating area that wraps around three sides. 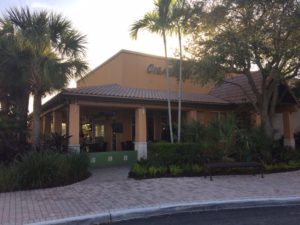 Smoke appears to do a thriving business and has a humidor packed full of faces. They have most of the bug names as well as some obscure faces, that are not well-known.

The beauty of Smoke on The Water is that their tobacconists go out of there way to introduce those less than famous sticks, which is a boutique manufacturers dream come true.

Many times a shop will take in a new face, but not really devote a lot of time to introducing their customers to them and they just die on the vine.

Not so at Smoke on The Water, they realize that if they market those unknown brands, and create a demand they will sell more cigars and will create a nice full humidor, that guys like me love to see.

I Really Must Go Now

I’m so glad we had this time together….. I am always breaking out in song!

To say we had a good time would be an understatement, this was a blast and another grand cigar adventure.

It was truly a pleasure to get to meet Steve Saka and get to talk about his passion for premium cigars and in general just shoot the breeze with him.

Many thanks to the gang at Smoke On The Water for inviting him out and for the party, That place is a lot of fun and I highly recommend it to anyone who gets down to South Florida.

Please feel free to leave comments, suggestions or questions in the section below.

Until the next time “Light em Up!”