Though that I would write a post to let you know how the South Dakota Tobacco tax is hard on cigar smokers.

I come to the motorcycle rally at Sturgis every year and know that I need to be heavily stocked up on cigars when I get here or I will be paying through the nose if I have to buy any when I get here.

When it comes to “Sin Tax” South Dakota is one of the highest in the country.

I have recently had the opportunity to spend an extended period in the great state of South Dakota, and as you all know I am a consummate fan of Premium Cigars.

However, when you purchase cigars in SD, you are charged a whopping 35% with no cap on every stick, which means for a $9.50 cigar you automatically pay $12.83

South Dakota is not the highest in the country percentage wise, but most of the ones that are higher, have caps, the exceptions being Alaska 75% where you will pay $16.63 for that $9.50 stick, California at 65.08% which equates to .68 for the same cigar.

New York is taxed at 75%, but had something called the Industry Standard Adjustmant Ratio, so the actual tax fluctuates (I will try to remember to leave the link)

Conversely Florida, New Hampshire, Pennsylvania and (can you believe) Washington DC have no tax on cigars.

I found this info at Halfwheel.com

No Smoking In Cigar Bars

Another lovely issue you will face if you want to burn a stogie in South Dakota, is where?

I tried to decipher the rules about smoking in cigar bars and they are long and convoluted, but I will just tell you was I was told by folks I have met in the cigar industry her in SD

As I understand it, you can only smoke legally in two cigar bars in the whole state! This is a big state, so you have to go to Sioux Falls or Deadwood, the two ends of the state, about 300 miles apart.

While the state taxes on Cigars are ridiculous, the people tend to be very friendly and engaging, particularly those in the cigar scene.

As I have traveled extensively around this lovely state, seeking out cigar adventures, I have had the opportunity to meet many people in the cigar trade and speak with them about how the states stringent tobacco laws affect them and their business’ 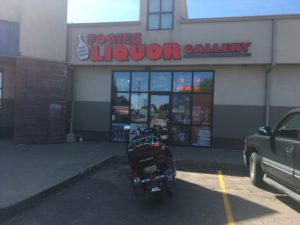 Just today, I had the pleasure of talking with Scot and Traci Harvey at Fogies Liquor in Sioux Falls. I had a wonderful time speaking cigars with Scot.

They are pretty hard hit by the tax laws like every one else and that has to affect sales. They have a nice selection in their wall length stand up humidors. 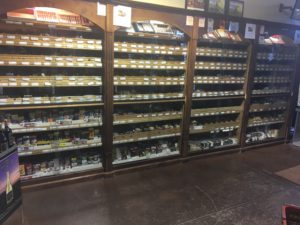 The high point of my visit was when Scot gave me a CAO Orellana, which is the fourth in the Amazon series and has just been released at the IPCPR this year. 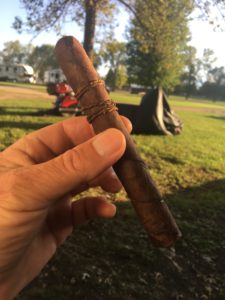 Those of you who follow the blog may remember that I have done reviews on the Amazon Basin and the Fuma Em Corda and am really looking forward to reviewing this stick.

I seem to be having some luck obtaining new cigars that have just come out and have yet to be reviewed and this is another one and I will be doing a review just as fast as I can.

The first being the JTL which I was not impressed with, lets hope this goes better!

Another place that I stumbled on during a misadventure was Millers Liquor in North Sioux City, which is just over the border in SD from Sioux City, IA

Seems like the Liquor stores are the place to find cigars in SD!

This is a very interesting place and I will tell you about the misadventure in the next section, but this place had a real good sized main humidor as well as a wall length one outside the main one.

They had quite a selection of premium cigars and what really impressed me was the prices. Their prices were very reasonable, especially for South Dakota.

We got to meet Susie and Kristin who were very friendly and impressed with Cigar Pals (that’s me)!

I love it when folks are receptive to what I am doing with this blog and it makes it a lot of fun to talk with them and share stories of our cigar adventures.

Scot and Traci were likewise enthusiastic and I really enjoyed meeting all of them.

Now For The MisAdventure

After my first trip to check out the Sioux Falls cigar scene, I decided to go down to Sioux City in Iowa to see how they do cigars.

Well Iowa is a no helmet state as is South Dakota, so I rolled on down there to one of the places that I found via Google.

Got down there and the GPS told me to hang a right, and I did and I found myself in Nebraska, which is not a helmet free state.

Needless to say some pretty colorful words came out of my mouth, especially when I realized they were doing construction at the end of the bridge and I would have to go a few blocks into NB before I could turn around.

I later found out that I rode right by the place I was looking for, twice, but I was too worried about being in Nebraska without a helmet and since my new drivers license hasn’t caught up with me I have no ID

Can you say paranoid!

So if you go to South Dakota

So if you are planning to visit the state, just remember that South Dakota tobacco tax is hard on cigar smokers and it’s even harder to find a place to smoke em.

Bring your own, but don’t try to sell any, that’s illegal!

I hope you have enjoyed this article and please feel free to add comments or questions in the section below.

Also let me know what your favorite cigar shop/bar/lounge is and I will try to put it on my list of places to visit and maybe have a stick with you and your cigar pals!