Hey Cigar Pals: I just had the wildest cigar adventure, that I literally just stumbled into!

I was up in Misoula, MT last Friday, because I was having Sean Kochel of Kochel Guitars do some work on my cigar box guitars and I went up to pick them up.

I invited my buddy Jeff up, so we could visit after I conducted my business with Sean and we both arrived a few minutes early and were standing on the street talking and I turned around and was looking at the Micallef Cigar Van parked across the street. 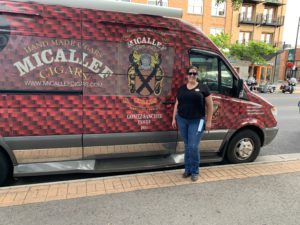 I said to Jeff, hey that’s the Micallef truck over there, I wonder what they are doing way up here, they are a Texas cigar company.

Then Sean Showed Up

I am going to tell you a little about Sean, because part of why I was there was to do a little interview with him for Guitars and Cigars, my other blog. 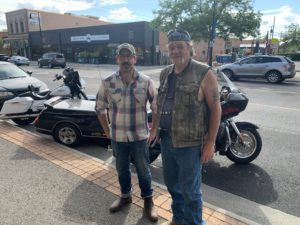 Sean is a very accomplished guitar maker and has made guitars for people all over the world and you can read all about him in an upcoming post at Guitars and Cigars.

I Literally Stumbled Into A Cigar Adventure

So after Sean and I conducted our business, Jeff and I went across the street to Wordens Market and Deli where the Micallef van was parked and went inside.

Jeff was hungry and was hoping to grab a bite to eat and I was on the hunt for cigars. Unfortunately the deli part of the store was closed, but just as I was asking the cashier if the Micallef rep was there a guy with a cigar sticking out of his pocket was walking by and told me everyone was out on the side of the building.

I walked out the side and there were some tents, seats and tables and a bunch of folks smoking cigar (I found my people).

I walked over and started introducing myself and handing out cards, I think I had a brief introduction to Sarah Micallef who is the rep for Montana and Al Micallef’s daughter. Al is the owner of Micallef cigars and you can read all about him in my post Micallef Grande Bold

Also, I talked to a guy named Ken Wickman and he told me about a big event that they had planned for the next day called Smoke On The Water, Fire In The Hole. This was a golf tournament that had evolved from a cigar cruise to a 9 hole golf tournament since a company called Far West would not be open this year and had to cancel because of Covid.

Jeff was still hungry, so we went down the street and got something to eat and brought it back and ate with the cigar smokers.

I had wanted to talk with Sarah, who was talking with others, so I waited patiently (yeah right) and finally got to talk to her.

We hit it off right away and she is pretty knowledgeable about cigars, especially Micallef, which she should be.

We hung out by her van long after the mini event closed down, talking cigars and the cigar industry and probably would have talked longer, but it was getting dark and I had yet to find a place to pitch a tent and she needed to go pick up her dogs and get set up in her camp.

Sarah pretty much lives in the van when she is on the road servicing her cigar accounts and looking for new ones.

Smoke On The Water, Fire In The Hole

I got up on Saturday morning and got cleaned up and secured my camp and headed of for the big event. I never know what these events will bring, but I always anticipate a great time when it comes to hanging with cigar smokers. 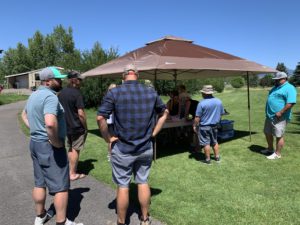 I am not a golfer and had no real interest in the golf tournament ( sorry to my golfing cigar pals ) but I was totally interested in the cigars that would be there.

This was a charity event and I believe part of the proceeds were going to Bikers Against Bullies.

The event was held at the Linda Vista Golf Course in Misoula, MT and was being put on by The Fools End Cigar Club, and I will tell you an interesting story about them later in this post.

Since I am Cigar Pals, let’s talk cigars! There were four different cigar vendors at this event, which was unique for the size of this venue.

Interestingly I have bumped up against two of them in the past and made some new friends with the other two.

First I will mention Micallef Cigars, because, if I had not seen Sarah s van, I would never have known about this adventure in the firs place. I first encountered Micallef Cigars at the Tabak Hause in Fredricksburg, TX and then met Brandon Luna at Finks in Helotes Texas.

I was very impressed with the Mata Fena and even did a review of it. So I kinda feel like I have history with them and now that I know Sarah, cigar my family ties run even deeper.

Next I just have to talk about Cattle Baron Cigars, out of Dillon, MT. I have posted several things about them both cigar reviews and an interview I did last summer at the ranch with Bryan Mussard, who is the Cattle Baron. 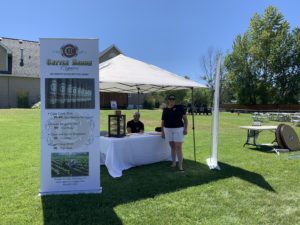 Sarah and Silas at the Cattle Baron cigars tent

Bryan was not at this event ( I guess he was in Alaska fishing ) but I got to meet his step son Silas and visited with him quite a bit during the course of the event.

I did a short video with him to put on Instagram as a teaser to Bryan, but even though it looked good in the viewer when I recorded it, when I uploaded it, you could only see part of our faces. I will probably post it anyway!

I just talked to Bryan this morning and Deb and I are going to stop by for a visit with them on Friday and will try to do a video interview and we are going to talk about selling Cattle Baron Cigars on Cigar Pals.

I hope to get that post up early next week, before Sturgis (before I get lost in that adventure)

The Third Cigar Vendor was Big Sky Cigars who are based in Misoula, MT. Adam Bucy was representing them at the show and I spent a good bit of time visiting with him and learning about the company. 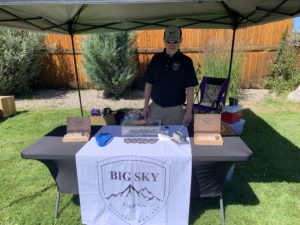 Adam talked about the fact that the partners love to Fly Fish, particularly in Montana and therefore have named their vitolas after world-class trout rivers in the state, such as the Big Horn and the Yellowstone.

These guys have only been around for a few years, however they have some nice cigars and a unique niche and are doing well in Montana and I think they will continue to grow across the country.

One of the interesting things about Big Sky Cigars is their packaging. You can purchase a five count wooden box of cigars with trout fly s and a guillotine cutter. This is a charity type package with part of the proceeds going to Warriors and Quiet Waters, a Montana based therapeutic fly-fishing program for post 9/11 veterans and their families. 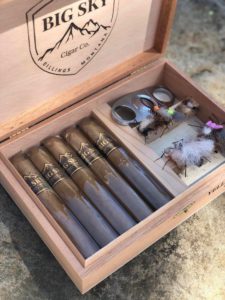 I will be reviewing their cigars in the near future and will go into much more detail about them at that time.

Last, but not least we had Out Of The Box Cigars. I don’t know much about them, other than, they appear to be a cigar retailer from Misoula and they are a partnership between Ken Wickman and Truman (whose last name I didn’t get). 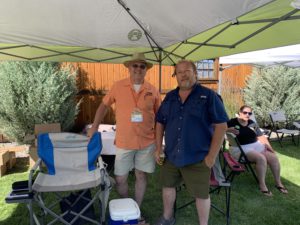 Truman (left) an Ken of Out Of The Box Cigars

They had a nice selection of top shelf premium cigars for sale and I picked up a couple, one of which I remember was a Southern Draw, Kudzu. 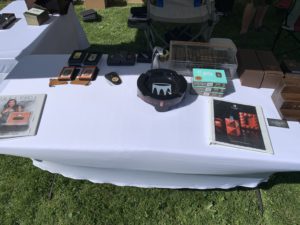 There was a big auction and I believe they raised a lot of money and it was quite interesting. Flash from Bikers Against Bullies was the MC and did a wonderful job of keeping everyone up to date on what was happening around the event and was a master with the auction. 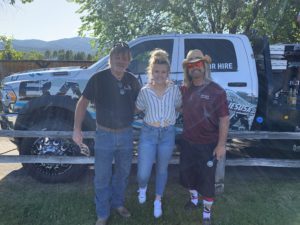 With Flash and his daughter

At one point he had a guy bidding against himself for a liquor and shooting package for 6 people, I think that they were going to shoot, before they drank!

On a side not, I am supposed to hook up with Flash at Sturgis and do an interview with him, so be looking for that in my Sturgis posts.

I got to meet several of the guys from Fools End Cigar Club and they treated me great and even invited me to their private cigar club after the event, unfortunately, I was wrestling with a kidney stone that pretty much left me alone for most of the day, but late in the day it started acting up

I had to go find a place to pitch my tent before joining them for the after event festivities and by the time I got my tent set up, I was in so much pain, that I couldn’t get on the bike and even had to take a pain killer, that left me completely mobil.

Not being able to attend, really bummed me out and I hope I get another opportunity to hook up with those guys and gals in the future.

Montana and Misoula have some crazy laws about cigars and so these folks decide to start a private cigar club to get around the laws and at one point they got sued, I think by the city.

When they went before the judge, he told the prosecution that he didn’t care if they were “an association of evil things” they weren’t breaking any laws and threw the case out.

After that ” Association Of Evil Things” became their unofficial motto!

When I was checking in, they were telling me that story and a guy named Andrew, bought me a hat with that logo on it. 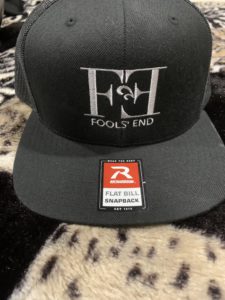 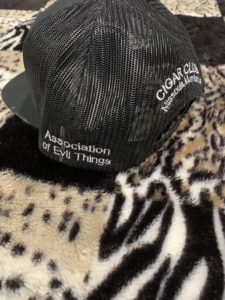 Andrew is a tanker pilot, they are the guys who fly those big tanker planes fighting fires around the country, helping out the US Forestry Service. 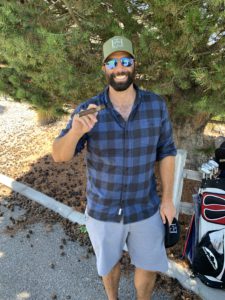 I had never met a tanker pilot before and enjoyed talking with him and learning about what they do.

Met A Lot Of Cool People

You never know who you are going to meet at these events and I had the privilege of meeting and talking cigars with a diverse crowd of people. 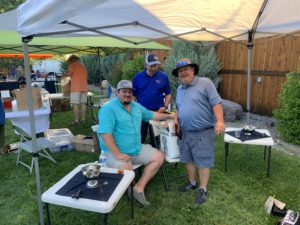 I met Anthony, who is a detective from Bozeman and had brought a contribution from the police in Bozeman to the event.

I also met Dan, who is with the Montana Police Protective Association (MPPA).

I also met Jerry, and I think he told me what he does, but I forgot (sorry Jerry)

Montana Distilling was also there and had a nice bar set up with free tasting. With my ticket to get in I received 3 cigars and two tickets, that I didn’t know what they were for, until right before I left and I gave them away.

There Is So Much More I Could Say

I could say so much more, but this post has really gotten long and I just don’t have the time, but suffice it to say, that a fine time was had by all.

Considering the Covid thing, they had a pretty good turn out and they were a very generous and fun bunch of people to hang out with.

Maybe I will make it back next year for the Third Anual Smoke On The Water, Fire In The Hole.

As always, feel free to leave comments, questions and suggestions in the comments section below.