Yesterday morning I took off on my bike to vote early in the Texas Primary, since we will be in Michigan on March 3, which is when the Primary actually is. 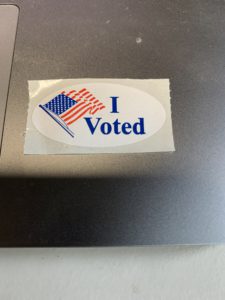 I had been wanting to check out a cigar lounge called Redlands, so after voting, I put er in the wind to head up to the north side of town.

As I was rolling along, the weather was overcast, but comfortable with just a sweatshirt and the bike was running great!

I knew that it was early in the day, so there probably wasn’t a lot going on at Redlands, so it came into my head that I could hit them and two others and that would make a San Antonio Cigar Lounge – Trifecta! 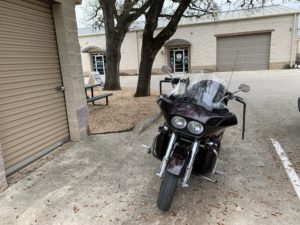 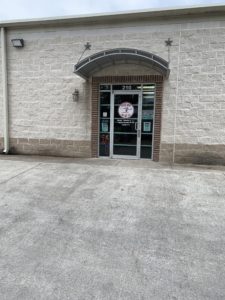 So first stop was Redland Cigar Company, who’s claim to fame it their 2200 square foot lounge, they say is the biggest in Texas. I haven’t been to every cigar lounge in Texas, but I’m gonna take their word for it! 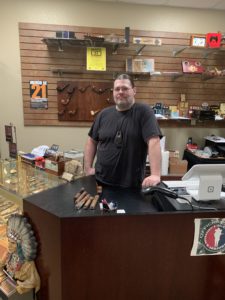 As I walk through the door, I am greeted by MJ and I introduce myself and give him my standard “Hi I’m Chuck with Cigar Pals! I travel around the country on that Harley out there and have Cigar Adventures, then write about them in my blog”

So as I visit with MJ, I discover that he is a very knowledgeable tobacconist and I tell him that I prefer a complex stick and he walks me right over to the Super Fly and says, you will love this. 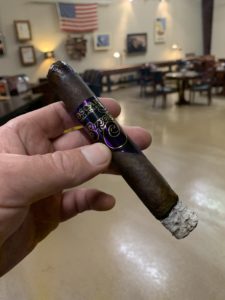 I think I have seen it before, but have no familiarity with it and I asked, who makes it, just as I see that it is by Oscar Valadares!, Oh,

Oscar I say, you can’t go wrong with anything made by Oscar (the guy who makes “The Leaf”)

We both agreed on that!

MJ showed me several other sticks and I, of course went over budget, picking up most of what he suggested. 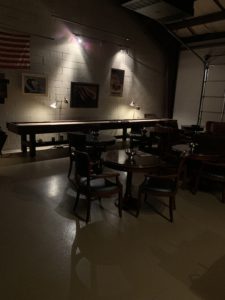 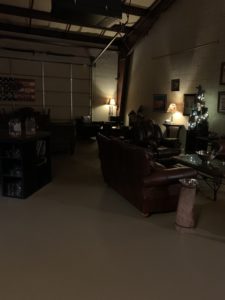 He then took me into the lounge and showed me tons of comfortable leather chairs and tables, big screen TV’s, an old-fashioned soda machine that dispensed cans instead of bottles (for 50 cents) and they have a custom-made shuffleboard table (made by one of the members).

I sat and smoked that Super Fly and visited with MJ while he cleaned the lounge. That Super Fly is a very nice stick and I will be reviewing it soon.

MJ invited me to come back that evening for Movie Night and I said I would try to make it.

I decided I better get moving if I was going to hit the other two lounges and not hit rush hour traffic, so I said good by to MJ and headed out the door.

Then when I got outside, I remembered that I am a blogger and that there are things that I am supposed to do, one of which is to take pictures (Deb usually makes sure this gets done, but she is out of town), so I go back in and take a bunch of pics. 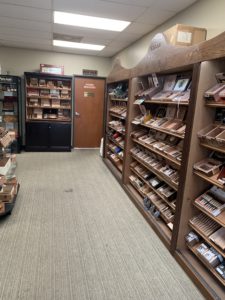 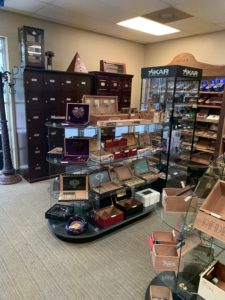 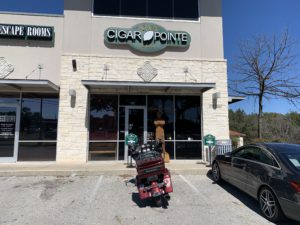 Next stop, back to Cigar Pointe. After doing the review of the Principle Aviator, I realized that I need to try out some more of Principles lines.

I also realized that the first time I was there, Gabe introduced me to several of his boutiques sticks and I decided to try his suggestions, but I never really looked at his stock.

I picked up two new Principle sticks, one called “Money To Burn” and wait till you see the review of this stick, very cool packaging and marketing idea. You won’t want to miss it! 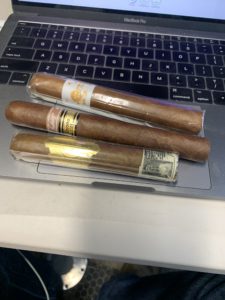 I also picked up a Tatuage Cojonu 2003 on Gabe’s recommendation. I have not smoked anything by these guys and they seem to be very popular, so I thought I would review one, so you can be looking forward to that also.

After picking up cigars, I stopped back in the lounge, where Beatlejuice was playing on the TV.

Dave who I met from my previous visit was there and Turner came in shortly after I did. There was another guy there and I am ashamed to say, I have forgotten his name (I hate when I do that).

*** If you happen to read this post, drop me a line in the comments section and let me know what your name is and I will update this with it.

I sat and had a stick with the guys and watched the show, but didn’t want to get caught in traffic, so I cut it short and headed down the road.

on a side note: When I got to Cigar Pointe, I still had part of my cigar from 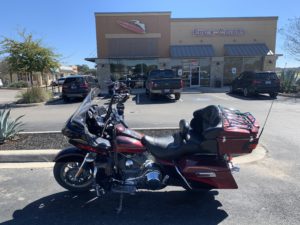 So my third and maybe not final stop for the day was at Finks. I picked out some cigars and visited with Jim (the manager) at the counter for a few, then went in to the lounge and lit up.

I was smoking a Micallef Meta Fina, which I recently reviewed 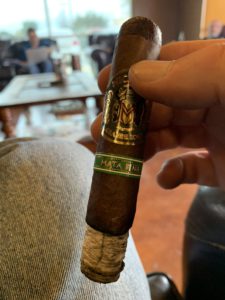 Even though Finks is my regular cigar shop, I don’t visit in the lounge very often, but I decide to do so today and I sat there smoking and watched as people came and went and noticed they have a custom in this shop.

When they arrive and leave, they shake hands with everyone in the lounge, even if they don’t know them.

In not wanting to break their custom, I got up and announced that the weather was getting bad and I needed to go, so I started shaking hands with the guys, which stimulated them to ask some questions and that started the banter and warmth that I always expect in cigar lounges.

It’s a long story about why I don’t hang out there, but it’s all on me and I wish I had spent more time in the lounge while I have been in San Antonio.

In the end this was a rewarding visit to a cigar lounge that I had shied away from, other that to just buy cigars, even though I tell you guys all the time to stop and visit.

By the time I got to the trailer I had three partially smoked cigars!

I had decided earlier that I really wanted to hit Movie Night at Redland, even though it is about an hour drive from Castroville, where we are camping.

So I got home and cleaned up and headed back north to see the movie.

I got there about 30 minutes before the movie was to begin and got a Black Label, which was suggested by MJ and found myself a seat for the show.

A gentleman came over and sat next to me and I soon discovered that this was Scott, one of the owners. They had brought Pizza in and he invited me to have some, but I was enjoying my cigar and didn’t want to dilute the flavor.

Then they started the movie Ford V Ferrari! 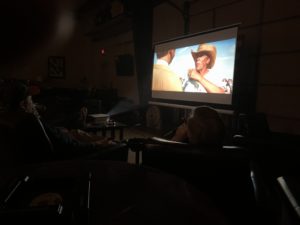 This was an awesome movie, telling the story of how the Ford Shelby came to be and how they won the 1966 Le mans in France.

After the movie, I visited some more with Scott and he introduced me to his business partner Ray.

Ray and I sat and talked about how small the world of cigars really is and how cigars are the great leveler, that brings people together from all walks of life.

So There Ya Have It

Three cigar lounges in a day, to make up the San Antonio Cigar Lounge Trifecta.

Actually it could be considered a Quad, since I did Redmond s twice!

That’s all for this post, see ya next time!

Remember to leave comments, suggestions or questions in the place below.