Hi Cigar Pals: I have not, for what ever reason, reviewed anything by Romeo y Julieta on this post.

I realized this a while back and thought that I probably should, since they are a pretty popular brand.

Then recently I found this Romeo, blended and manufactured by A J Fernandez and figured that I probably can’t go wrong with something done by AJ.

So today we are going to be reviewing the Romeo y Julieta by AJ Fernandez to see if both Romeo and AJ are a good pair. 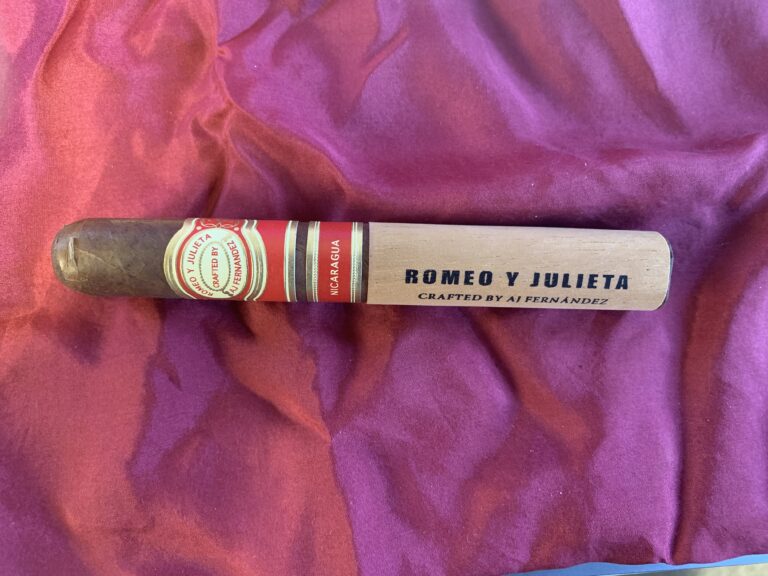 This cigar is named for the great Shakespearian tragedy and has been around since 1875. This is an iconic Cuban brand that came to be as a partnership between Inocencio Alvarez and Manin Garcia.

The brand won numerous tasting awards early on, but really gained prominence after it was acquired by Jose ‘Pepin’ Rodriguez Fernandez who had previously been the head of the Cabañas factory in Havana.

He was big into horse racing and traveled extensively in Europe and America with his horse Julieta and throwing extravagant parties for members of high society.

Apparently Fernandez was crazy as a bed bug about the play Romeo and Juliet and did all kinds of crazy stuff in regard to his obsession, which you can read about In the Holts post.

His obsession did nothing to dissuade his customers, who were the very wealthy, from purchasing his cigars.

Sir Winston Churchill fell in love with the Cuban brand in 1946 and the cigar he favored is still a mainstay in the Cuban Romeo’s.

That brings us to the Cuban revolution, when Castro took over and Romeo moved to The Dominican Republic and nationalized Cuba retained their version of the Romeo y Julieta.

You can read all about Fernandez and other cool Facts about Romeo y Julieta in this Holts article:https://www.holts.com/clubhouse/Cuban-cigars/history-romeo-y-julieta-cigars

AJ Fernandez was born in March 1979 in San Luis Cuba, where his father, grandfather and Uncle were tobacco growers working for the government agricultural department in tobacco.

AJ was raised around tobacco and learned from some of the best including Alejandro Robaina, who initiated him into the secrets of tobacco.

In 2004 AJ immigrated to Nicaragua and started off working for his Uncle Nestor of Plasencia Cigars, however that was short-lived.

Then he started blending cigars for other cigar makers like Rocky Patel with the Summer Blend in 2008 and created a special line Man O’ War for online giant Cigars International.

He also created the brand Diesel and Ave Maria and even did work for Gurkha and Padilla.

However, AJ longed for his own brand and after buying land to grow his own tobacco and 7 factories around Esteli, he finally launched the San Latano in 2010, which was very well-received by cigar aficionados worldwide.

AJ has gone on to become one of the biggest names in tobacco production and is known as one of the best blenders in the world of cigars.

You can check out a nice article by Cigar Journal here:https://www.cigarjournal.com/aj-fernandez-discipline-and-passion/

Now the iconic cigar manufacturer Romeo y Julieta has teamed up with the legendary blender AJ Fernandez in creating this latest incarnation which features some of the finest tobaccos on the world.

Let’s see what happens when an icon meets a legend in this cigar review of the Romeo y Julieta by AJ Fernandez.

Burn:nice and even, beautiful white ash

Light Up: Pepper shot, with earth and honey

First Third: Still earthy, roasted nut morphed to black walnut, the honey is there in the background, also a hint of espresso and nice long finish

Final Third: Not much change in the final third, flavors were still quite noticeable and pleasant to the end.

Notes:Overall I thought this was a most enjoyable stick. While not really complex, the flavors that were there we well pronounced and pleasant on the pallet. Would definitely recommend this cigar to any who enjoy a medium-bodied to full stick.

So, what’s not to like, nothing that I could see. The burn was excellent throughout. The flavor, while not terribly complex, still maintained a three-dimensional atmosphere. Plenty of smoke, the flavors that are there are well mixed and kept things interesting.

Would I recommend it: Absolutely, especially for those of you who prefer a medium to full body cigar. Well worth the time and money. Have one with a friend!

As always, feel free to leave comments, questions or suggestions in the section below