I am doing a cigar review of the Rocky Patel Number 6,  which is a medium-bodied cigar made at our factory in El Paraiso, Honduras. Named for its blend number,  which was the best of the samples.

The line boasts a Honduran-grown Corojo wrapper with a core blend of Honduran and Nicaraguan fillers framed by a Honduran binder.

They have a really interesting video series that tells how they grow the plants and in one of the texts they talk about running a mower over the tops of the plants, that cuts off the tips and this somehow stimulates the plant to grow stronger and stimulates unprecedented growth

Here is something else you may or may not know. Sun grown tobacco will only grow to about 5 ½’ tall and predominately is used to filler and binder whereas shade grown can grow to 9′ tall and is most often used as wrapper.

After 100 days, the plants are harvested from bottom to top in sections. These sections are classified as Seco the bottom of the plant, Viso the middle, and Ligero the top of the plant. These three sections are further subdivided by layer into smaller groups called primings. Each leaf of the plant can supply a slightly different flavor. By dividing the plant further into primings, Rocky Patel has greater control in pinpointing the exact flavor he wants from each of his plants.

Interestingly, the plants grown in the states are harvested as a whole plant and hung to dry that way!

I have to tell ya, you really should follow the link I give you to watch and read about the process, “from seed to Cigar” I have seen this and read about it, but this video series was still fascinating.

What’s in a name?

Rocky Patel works hard on all of his releases to make sure they’re the best they can possibly be, and this latest release is no exception. When producing a new cigar, blenders will typically make several slightly tweaked versions of the same blend before they settle on a final recipe. When the smoke had cleared from all the product testing on this newest Rocky creation, it was blend number 6 that stood out as being the best. They had the perfect blend, all they needed was the perfect name. A few ideas were floated but nothing seemed to stand out to Rocky, so he decided simply to name it after the test blend number, and so the Rocky Patel Number 6 was born.

Click The Pic to order your Rocky Patel Number 6 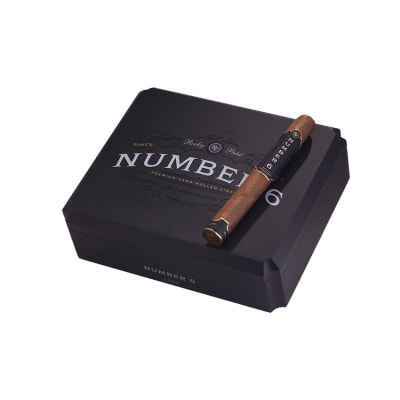 Nish Patel describes the flavor of this beauty as having a lot of sweetness, and accurately boasts that it’s totally unlike anything else they’ve released to date. Up top is a Corojo wrapper grown in Honduras, concealing the finest leaves from Rocky’s own farms. The profile is held down by a unique honey note, over top layers of vanilla, coffee, earth, and bread. The Patels spare no expense in creating only the best cigars, and you’ll undoubtedly agree when you light up a Rocky Patel Number 6.

What’s Under The Hood Of The Rocky Patel Number 6

Draw: Nice and even, with just a little back pressure

Light Up: Smooth and oily, with notes of leather, mocha and spice,

First Third: shortly after light up, started getting some pepper. leather, mocha and spice, oily on the tongue. Late in the first third, took on some sweetness and the mocha became more pronounced.

Final Third: Stayed pretty much leathery till the end, still some sweet spic in the background and the java pretty much went away.

Notes: This stick started out with a pretty nice flavor profile, but started fizzling out at about the half. I was constantly having to watch the burn and had to do two touch ups.

OK, so I gave this stick a second chance to ring my bells and while it started off with some interesting flavors, it just didn’t make it to the finish line.

As most of you know, I prefer a cigar that is complex and Rocky Patel Number Six started out kinda interesting, it just didn’t have the staying power.

I have purchase two of them and don’t believe I will buy another one. There are too many cigars out there to spend my hard-earned dollars on something that doesn’t hold my interest, however if you think you would like to give it a try, because we all know that cigars are subjective, there will be a link somewhere on this page where you can order one.

As always, if you enjoyed this cigar review, please feel free to leave comments, questions or suggestions below in the comments section.

Till Next Time Cigar Pals: