Paraphrasing the late Dr. John, I was in the right place, wrong time. Searching for Connecticut Tobacco.

I often fly by the seat of my pants and this was no exception. Apparently there is much I don’t know about the way they grow tobacco up there and it bit me in the butt!

Yep, I managed to find Connecticut and I even managed to find some tobacco fields, but what I didn’t know was that the harvest doesn’t start until late August to early September.

I arrived and found a really nice AirBnB to stay at for the night, within a few miles of Windsor, CT. 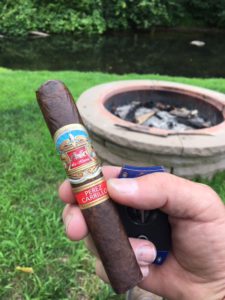 Unlike some of my more hardcore biker buddies, I like a little luxury sometimes and a soft bed, hot shower and opportunity to just relax.

I got to sit in the backyard by a nice creek, smoking a cigar and had WiFi to work on the blog.

Something else that I didn’t know, is that they don’t put the shades on the Connecticut Shade tobacco until the leaves are strong enough to thrive under the shade. 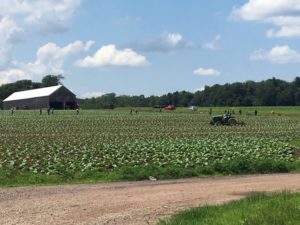 The plants are still pretty small yet, even the Connecticut Broadleaf is only about 2 feet tall right now. 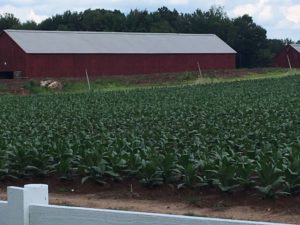 What is kind of interesting is that that part of New England is densely populated so the fields are all over the place. One farmer might have small individual fields scattered all over the county. 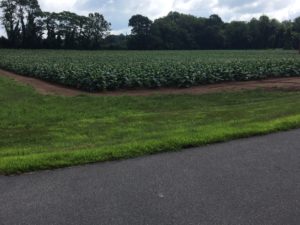 The easiest way to locate them is to just drive up and down roads and when you least expect it, there will be one or two. 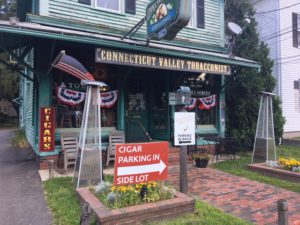 So I found myself very confused when I first started looking for tobacco fields and I was actually getting frustrated, so I stopped to have breakfast and try to do some research.

I discovered through Google that Battleground Cigars was right up the road and since I had smoked and enjoyed some of their cigars at Stogies down in Valdosta, Ga, I would pay them a visit.

I was greeted by a young lady by the name of Kristine and came to find out that she had been working there for 5 years and was very knowledgeable of Cigars and Tobacco. 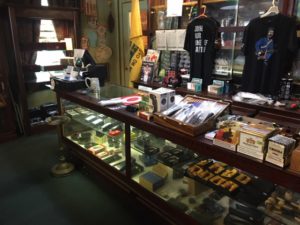 It was Kristine who educated me as to the fact that I was about a month too early to see what I wanted to see with regard to the tobacco growing process in the Connecticut Valley.

She told me all about the history of Battleground Cigars and I purchased a few and plan to review at least one in an upcoming blog post.

Well since I was too early in CT, I figured I might a well mosey on down the road. Deb was less than 200 miles away at her nieces and my plan was to check out Lancaster and some Pennsylvania tobacco growers.

I punched in Barto, Pa in the navigation and off I went. Had to navigate some heavy New England traffic and about the time it smoothed out and I was rolling down I84 West, my GPS decided that I needed to adjust my course.

I was concerned at first, but thought, maybe this is a shortcut. I figured I would end up down by the city, but wasn’t prepared for what happened!

All of a sudden the GPS tells me to head for the Tapanzee bridge, and it’s rush hour and I can see the traffic backed up, oh no, ain’t going that way, so I ended up getting on 9 north toward Peekskill and went back up and got back on 84.

That was too close for comfort!

I’m not saying I won’t go into New York City, especially since I would like to check out the cigar scene there, but now without the guidance of someone who is familiar with the city and it’s cigar lounges.

(after all, I was confused in Connecticut Tobacco country, can you see me wondering around NYC)

So as always folks, please feel free to comment below and let me know what you think of my misadventure or to ask any questions.