This will be my fith and final post about our visit to the DR and our last two adventures in Puerto Plata Dominican Republic and then back to House Blend in Santiago. What a ride it has been. Even when we went to the beach to try to catch up and catch our breath another cigar adventure materialized

For a brief period at the beginning of out trip to the DR it looked like nothing was going to happen beyond our visit with Sylvain at Zemis Tobacco and I was rather frustrated, but the after meeting Jose Alba at House Blend a myriad of opportunities opened up and we hit the ground running. 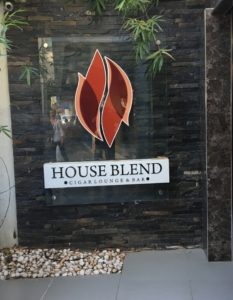 We had promised ourselves a trip to the beach while we were here and had already missed our intend date we were to go to Puerto Plata and had extended our stay by four days so we could attend a rolling event at House Blend, it was with great anticipation that we found ourselves on the road to the coast.

I found it quite interesting and at times anoying as we wound through the jungles and farmland lagging behind trucks and cars, all headed toward the same destination. 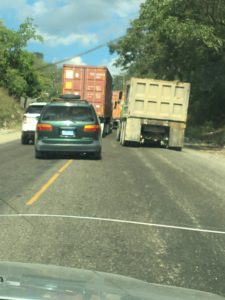 Just before we wound our way into Puerto Plata, our driver Luis suggested we stop at his favorite open air resturaunt and sample some of the local quisine….Fish, with heads intact that we had the priveledge of picking out for ourselves, yummy…. 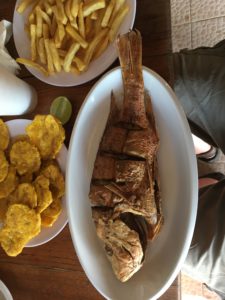 After a scrumsious dinner, we meandered into the little beach area of Crofesi, a little resort community to the north of Puerto Plata home of Ocean World.

The Villa and the Adventure

We checked into Villa Plasa Taina and spent the first night in a nice room, but were unable to access the internet, which is crucial for a bloger. Bright and early the next morning there was a knock at the door and management had decide to move us to a room with better access to wifi, which just so happened to be a much nice room with a kitchenet and a private balcony with an awesome view of the ocean. 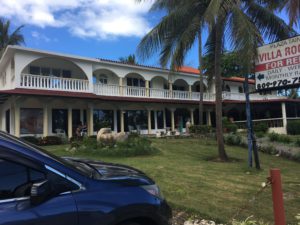 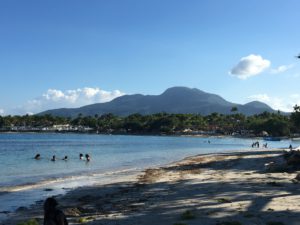 Later that day we decided to walk down to the Casino to hit the ATM for more Dominican Pesos and then a brief walk on the beach.

As we came off of the beach, we were aproached by a guy shouting, hey cigar man, I have cigars…..Cohiba’s! After visiting Mexico a couple years back, I have learned that these are not Cuban Cohiba’s! They are not even the ones made in the DR by General cigars. These are just knock off’s whith a nice Cohiba band and box that are probably worth more than the cigar! Do Not buy them if you go there…. I met a guy who did and felt so bad for him, that I gave him a real cigar.

Later that evening we decided to take in some night life and after a fine repast at a little resturaunt down the street, where else would a cigar guy go, but to a cigar bar! I had found out before we left Santiago that Eladio Diaz just happened to own one in Puerto Plata.

On To Our Next Cigar Adventure

So we called an Uber and headed out for the Puerto Plata Cigar Club. 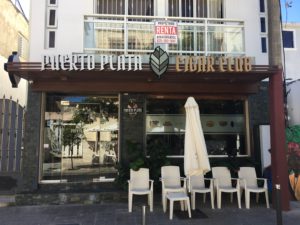 Upon arrival we were greeted by Jackson and the cashier Rachel. Jackson much to our delight speaks good English and when I told who I was and what I was about and that I had met and interviewed Eladio, he welcomed us with open arms. We then launched into great conversation about the cigar industry and talked of favorite cigars. 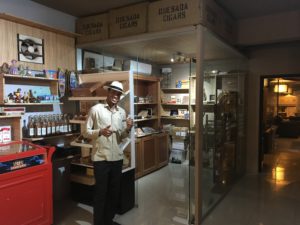 He showed me around and took me into the back room where they have rolling stations set up. Because they are a sea port where the cruise ships come in, they have set this up to give the passengers a little taste of the cigar industry. So they can have a cocktail, indulge in a premium cigar, be educated and buy their souvenirs all in one place.

We sat there for hours and discussed all things tobacco and were even turned on to the Dominican version of the hot dog, which is what we had interupted just after arriving there ( he insisted ). We had a wonderful time and smoked some primo cigars and then Jackson invited us back to observe the tour, as there was a cruise ship due in the next afternoon. 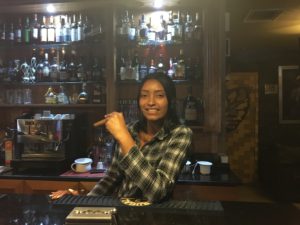 I got up the next morning and headed on back to the Cigar Club to check out the tourists. I arrived and the place was quite busy for that time of day, so I grabbed a smoke and we waited, and waited, but no tourists showed. But what happened was, they gave me my own private tour. 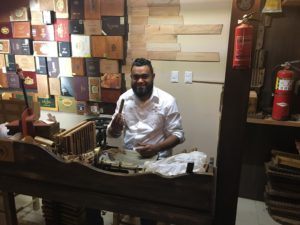 I met Mickey (yes, like the mouse) who is the master blender and they talked me through the rolling process, which by this time I had seen about 20 times, but am still impressed by. I actually learned a couple new thing, one, the machine they use to roll the filler is called bunchera (don’t know why I hadn’t asked that question before).

The second thing I learned is that tobacco seeds are tiny, almost like grains of sand. I had wondered about that, but had not gotten around to researching it and when I came across what apeared to be box of sand, I asked and was informed that this is the magic beans from which all good stogies come. 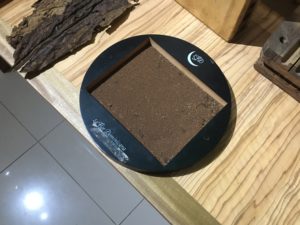 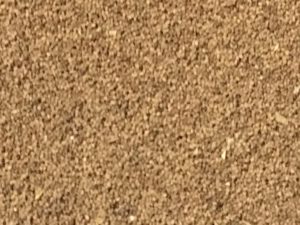 I stayed a while longer in hopes that the cruise ship would show and I was rewarded for my vigilence when Mikey came out from the back and presented me with a cardboard envelope that contained three handrolled cigars he made just for me. 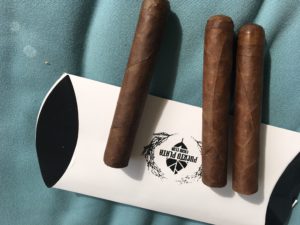 We had a wonderful time in Puerto Plata and there is so much more that I could write about, but this Dominican adventure has spanned five posts and needs to be closed out and I have one more adventure to cover in this post.

We took a different route back to Santiago and climbed the mountains and wound through the jungle on rugged back roads (that they were actually paving and widening). The scenery was incredable and traffic was somewhat sparse (in Dominican terms).

Back in Santiago we prepared for our final adventure and picked up our order of Cigar Pal cigars and got to visit once again with William and Anna and smoke the first cigars from our new line. 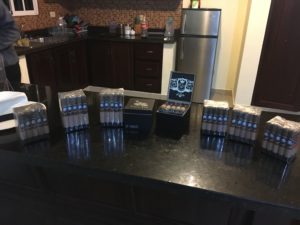 As we watched the festivities, it was obvious that most of these folks knew each other well and were having a grand time. We were disapointed that we could not have conversations with these people and promised outselve and those we met in the DR that we would work hard to learn good spanish before we next visited the Dominican.

There were four rollers scheduled to be there, but only two showed. They still put on a good show, and as they rolled you could just walk up and take a stick or two.

Jose Alba who had invited us to this event and was responsible for some of the awesome experiences we had in the DR called me over to meet Victor De La Cruz of L&V S.R.L. (thats like our inc.) a partnership between Victor and Leandro Compres formed in 2004. 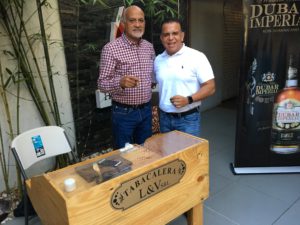 Then Alba asked me when are you leaving? I have some other people that I would like for you to meet! Unfortunately we were only hours from our return flight to the states and I told him we would have to wait for our next visit to the DR.

At the end their was a discusion and a question and answer session that we were invited to stay for, but knowing that it would have been in spanish so we said our goodbyes and headed on.

Parting Is Such Sweet Sorrow

Alas, our adventure had to come to an end and with sadness we returned to our AirB&B to pack up to leave. Some sleep would have been nice, since we had been up  since early morning and knew we would be flying through the night, but we decided to contact William and Anna to see if they wanted to get a bite to eat.

They picked us up and we went to a Pollo place (thats chicken for you gringos) and after dinner they took us down town to walk on the streets and watch the people. 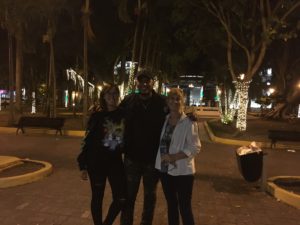 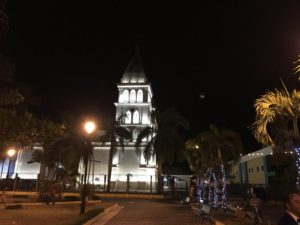 They had volunteered to take us to the airport and dropped us up at the room so we could finish packing. They came and fetched us in the wee hours and delivered us promptly to the airport and with warm heartfelt goodbyes and promises to return to the island we bid them adew and trudged off to our flight.

To say we had a grand time, doesn’t even begin to describe it. This was a grand adventure, way beyond my wildest expectations and I highly recomend the the DR and don’t forget to get down to Puerto Plata Dominican Republic.

I would be most appreciative for any comments or questions in the section below.