Well today we are going to do the Principle Aviator Cigar Review and what a review it was.

The other day I stopped by a place called Cigar Pointe, maybe you read about it in my post: San Antonio Cigar Shops – Another Adventure that I put up the other day.

Gabe who is the owner turned me on to some new cigars, one being the Principle Aviator. Just by the way him and some of the guys in the lounge talked it up, I knew I had to do a review on this stick. 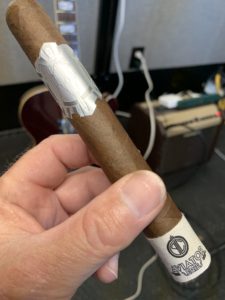 A Little About Principle Cigars

Darren Cioffi is a treasure hunter, who since he was in high school has been collecting antiques, and eventually he started collecting art work and rare documents,

He started collecting vintage cigar label art. Early in the 20th century a perfect storm of consumer tastes, economics and printing technology made these labels the finest color printing the world has ever seen. Recognizing their unique value, Darren sought out early tobacco artwork. Since then, he has built one of the largest antique paper archives in the world.

In time, he was drawn to cigars and during the course of two decades he traveled the world tasting all different types and styles of cigars and to the has a library with cigars dating back to the 1870’s

He next started blending and producing his own cigars for family and friends, but not until another decade had passed before Principle Cigars was born.

Not willing to put his name on anything less than Excellent, he searched the world looking for the right company, not willing to take short cuts, until in 2013, when Hendrick (Henke) Kelner talked him into going into production, declaring that even if they only had enough tobacco to make 1000 cigars, that’s what they would do.

What’s Inside The Aviator

The cigar that I smoked is called the Grande Pyramid and consists of Dominican, Nicaraguan and Peruvian filler, with a double Dominican binder and finished off with a Brazilian Cubra wrapper with a double cap.

This Vitola had a satiny brown finish, tightly rolled with to the blemishes and few veins.

Draw: a little back pressure, lots of smoke

Flavor Notes: Started off with nutty, citrus, caramel and cedar. The caramel was the prominent flavor at the start.

About an inch in, I started picking up cocoa and espresso and the cedar faded some.

At the half, the cedar became prominent again, picked up some pepper and caramel was still there

At the two Thirds point it was cedar, caramel and salty nut and stayed throughout the end.

This stick had a very long finish, that hung around until my next draw.

The Aviator is a nice complex cigar that I would smoke any chance I get and since they are so hard to find in the states, I don’t believe I will pass one up when the opportunity presents itself.

The Principle tobacco is fermented repeatedly to their taste, until maturity at the Kelner Boutique Factory in Santiago, Dominican Republic.

Production is very limited for some vitolas, to as few as 10 cigars a day.

Much like champagne, the blends are tweaked continuously by Daren and Hendrik to maintain the consistency of this vibrant living product.

Principle Cigars can be found at the worlds finest tabaconnist’s, meaning that there are only four places that you can find them in the United States! (they have a map on their site that shows where you can find them (really, just 4)).

I could go on their website and probably find a lot more to tell y’all about their cigars, but I will leave a link and you can do your own investigating.

I really enjoyed this cigar and will have to ride back out to Cigar Pointe to pick up some more Aviators as well as some of their other lines, that look and sound very intriguing.

There you have it, the Principle Aviator cigar review, hope you enjoyed it.

As always, feel free to leave comments in the section below ( I really need y’all to start doing this for my site to grow)

Don’t forget to look at more than one post, or my bounce rate will go up. What that means in Googlese, is that if you just visit one post, they think you weren’t interested.

Till next time: Fire up that smoke wagon!