Well, it’s day two of the 2021 PCA and knowing that it would be another scorcher in Vegas, I woke up early to try to get to the convention center before the heat set in. I grabbed a cup of coffee and a pastry (breakfast of champions) at the local gas station and filled my tank, ready to make the 80-mile trek into Vegas

The floor didn’t open for media and retailers until 10:30 am, but since I was early I figured that I would just visit folks that I know, Like Bryan Mussard (The Cattle Baron) and his faithful scout (Rep) Scott Thompson. Scott is also the President of Lone Star Cigar Brokers. 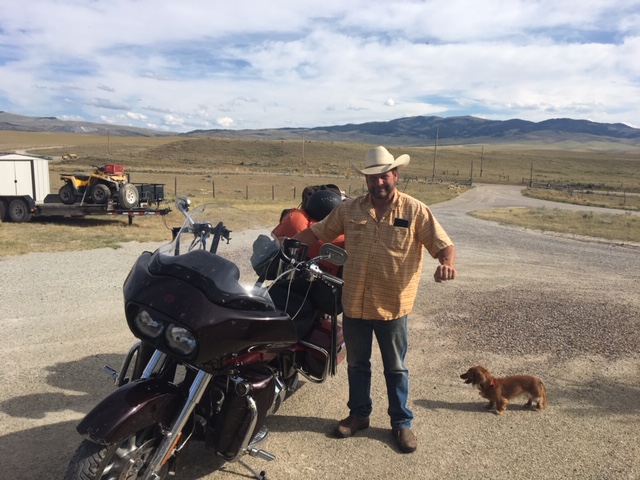 Of course, they were busy finishing preparations for the show, so I just pitched in and helped out where I could.

Cigar In The Bottle

Directly across from Cattle Baron, was Johny Soyak with his world-famous Cigar In The Bottle. I had been following Johny on Instagram for several months now and I really just didn’t get it, so I was happy to meet him and find out what this cigar in the bottle was all about. 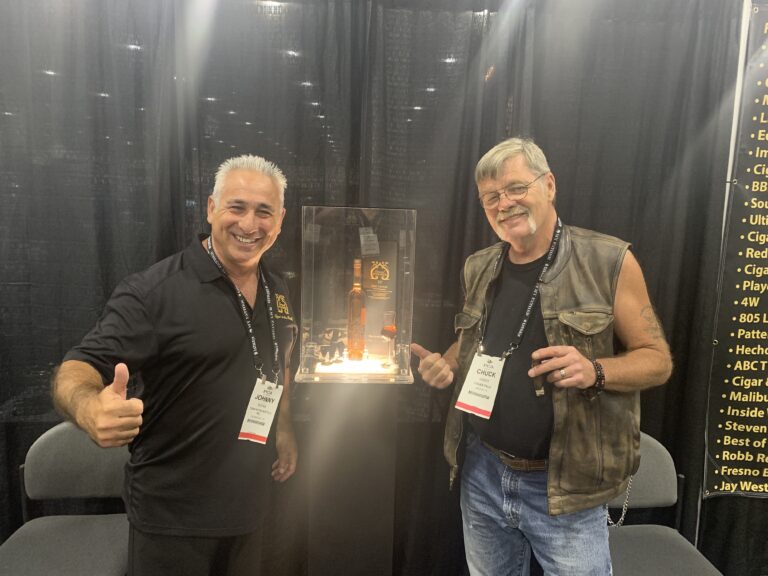 For the Cigar smoker who has everything, bet they don’t have this! The short of it is, You get a bottle of very fine cognac aged 5 -10 years, paired with a custom blended Vartan cigar, by Hendrik Kelner

The bottle is designed with a hollowed out chamber in the middle to encase the cigar and has a Bovida Humi pack, guaranteed to keep the cigar at the perfect humidity for up to 10 years.

I did an interview with Johny and he’s a really charismatic guy, who I really enjoyed visiting with.

I didn’t think to ask him, how ya get the cigar out of the bottle?

I also got to visit with my friend Manuel Diaz, who is the marketing director for EPC and his father it Eladio Diaz who is a master blender for Davidoff Cigars in Santiago, Dominican Republic. 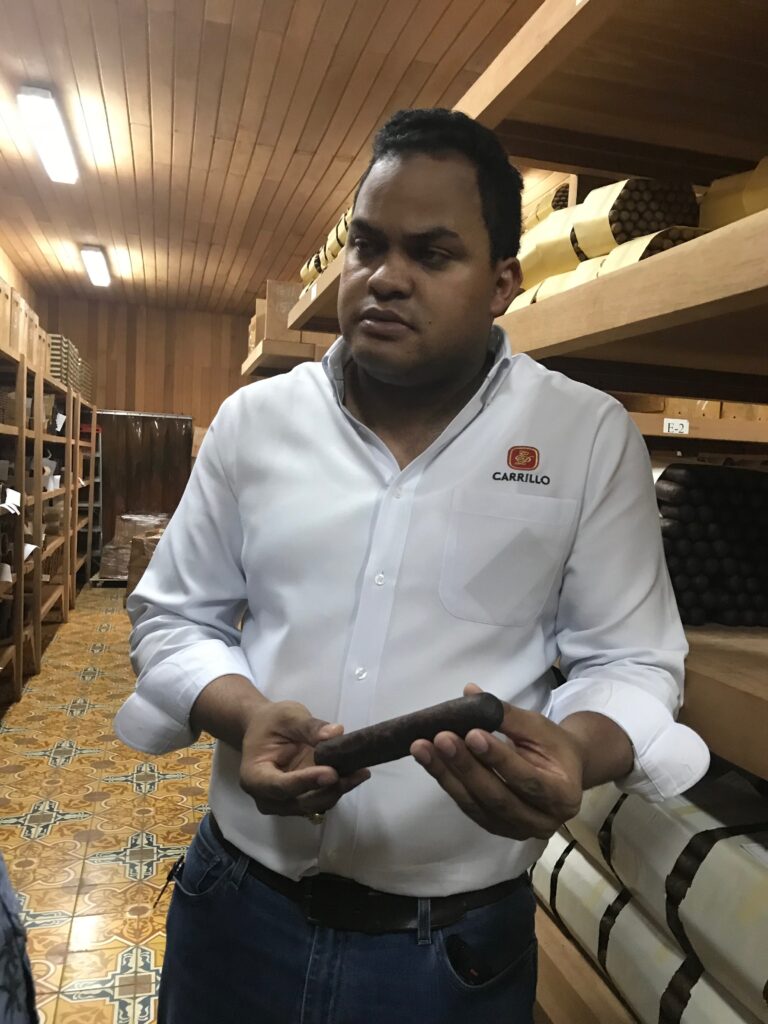 I had the privilege of meeting Manuel when we went to the DR a few years ago and Deb and I got a personal tour of the E P Carrillo factory, conducted by Manuel.

I did a brief interview with him and we talked about the new cigar they are coming out with this fall. This new vitola, is the same blend as the existing Pledge, however it is a 58 ring gage box pressed. I have one and will be reviewing it at Cigar Pals in the (hopefully) not too distant future.

I am a huge fan of EPC and am really looking forward to smoking this cigar.

The Folks From Tombstone

I ran into the folks from Tombstone (Smoke Signals) again, Mick, Suzanne and James and was sure glad I did, not just because James gifted me an Evil Knievel cigar, but I just really enjoyed visiting with these folks and hope to get down to Tombstone in the not too distant future to visit with them. 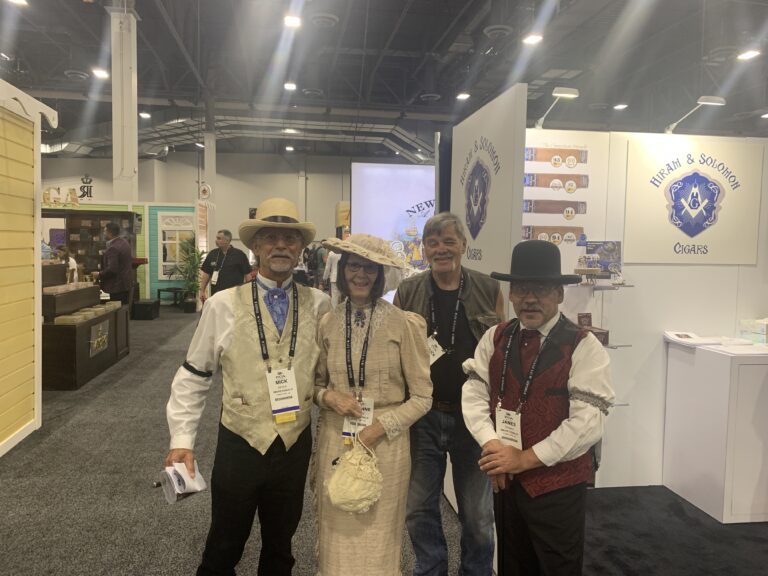 I ran anatomy old friends Jon and Scot from Warfighter Tobacco and saw that they were doing a good bit of business, so I didn’t get to close right then, but later on I got to catch up with them and visit a bit.

Stogie Chick, who I follow on Instagram was there and we all had a good time cutting up and Jon reminded me and was telling her about the first time we had met. 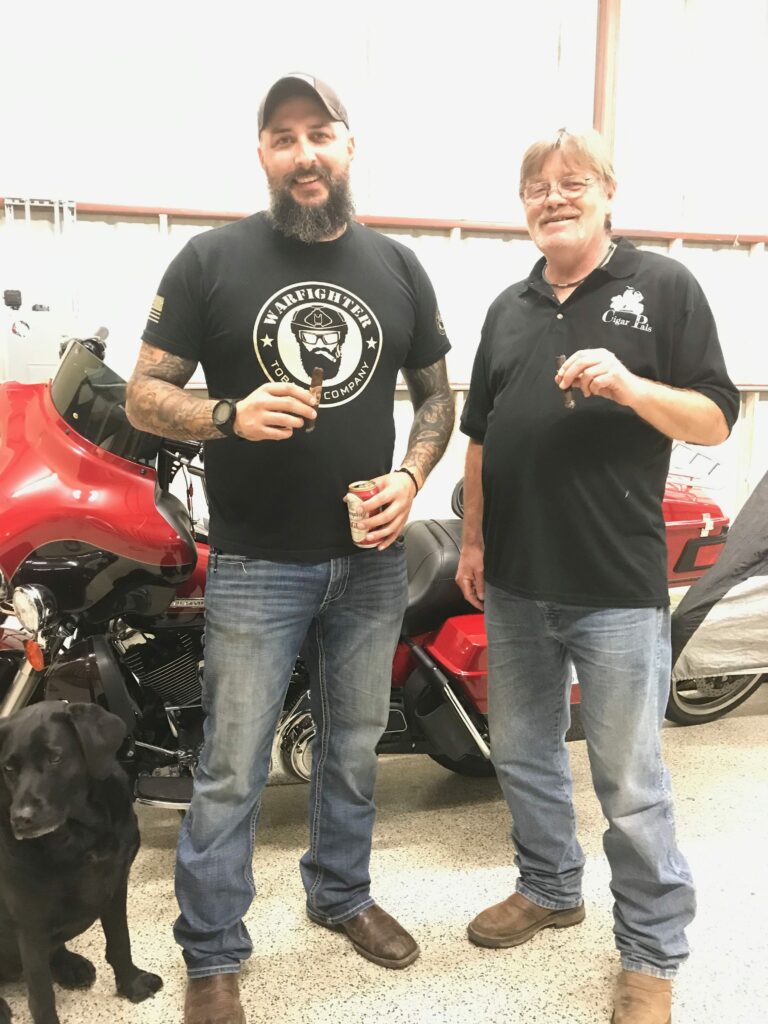 Kiera, Jon and me

They had just moved down from Nebraska to Texas and I went up to interview Jon at there new shop, the thing was, they hadn’t even moved in yet, so he just walked around with Deb and me telling us what it was going to look like.

I have been back up to the shop since then and am happy to report that they are bonified and look like the real deal.

I am putting this in for all of you brick and mortar retailers out there. I saw this at the Humidor in Dothan, Alabama and didn’t really get the gist of it at the time, but thought it was pretty cool, so listen up!

Sorry, don’t have a pic (see the video)

ETG (Exact Targeting Group) comes into your shop, puts all the equipment in for free and you get voiceless video of tobacco fields and roller doing their thing and every so often, they show a brief commercial from their advertisers, like Plasencia (if you sell Plasencia cigars, that shouldn’t bother you).

Every 15 minutes, you can put your own advertisement up notifying your customers of any events or special deals ya go going on, How could you not want this in your shop?

If you decide to do this, tell em Cigar Pals sent ya (I don’t get anything, I just want to let them know that I’m letting people know about them).

As long as I’m mentioning Plasencia, I stopped by their expansive booth to say hi to Tom Chavers, who I had the pleasure of meeting down at Seguin Cigar, in Seguin Texas. 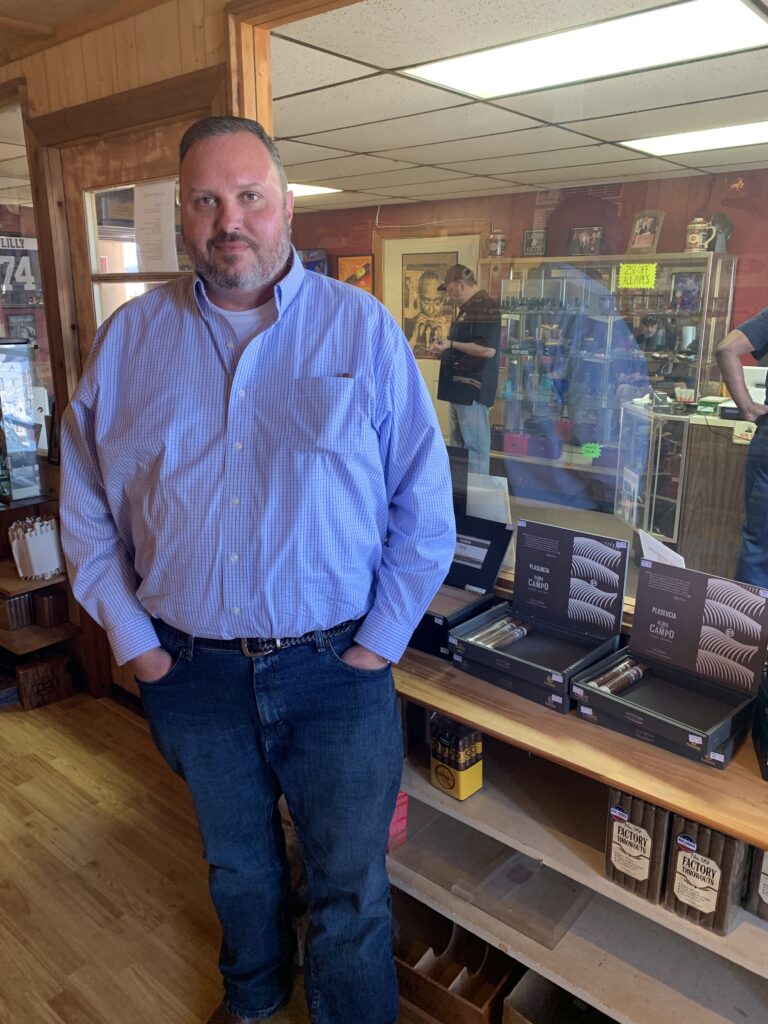 Those guys were covered up, they had a Huge booth (complete with a Latin band. I tried several times to stop and visit with Tom, but really never got the chance. On the last day, we just agreed that we would see each other back in Texas, go Plasencia!

Someone else I got to meet was Desiree from Drunk Chicken Cigars. This is another group of people who I had been following on Instagram and wondering, what’s the deal with drunk chickens? 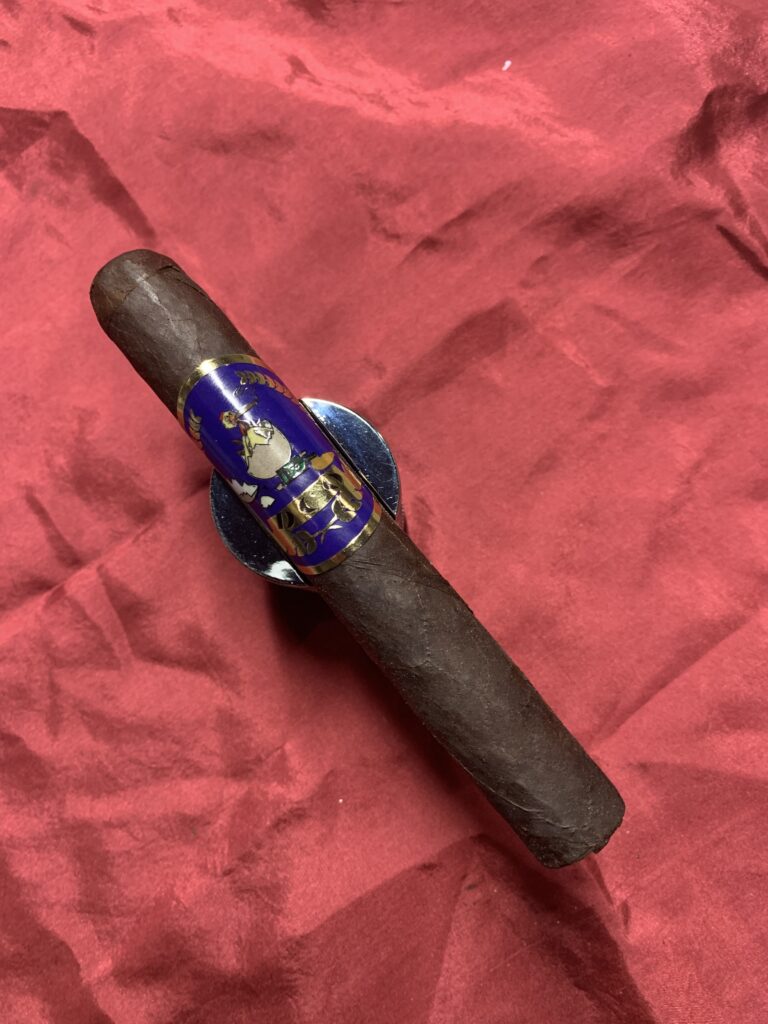 Seems there is more to the story than she was willing to share with me, but I did find out that they raise chickens.

I also had the privilege of reviewing one of their cigars, the DCO (Drunk Chicken Original) 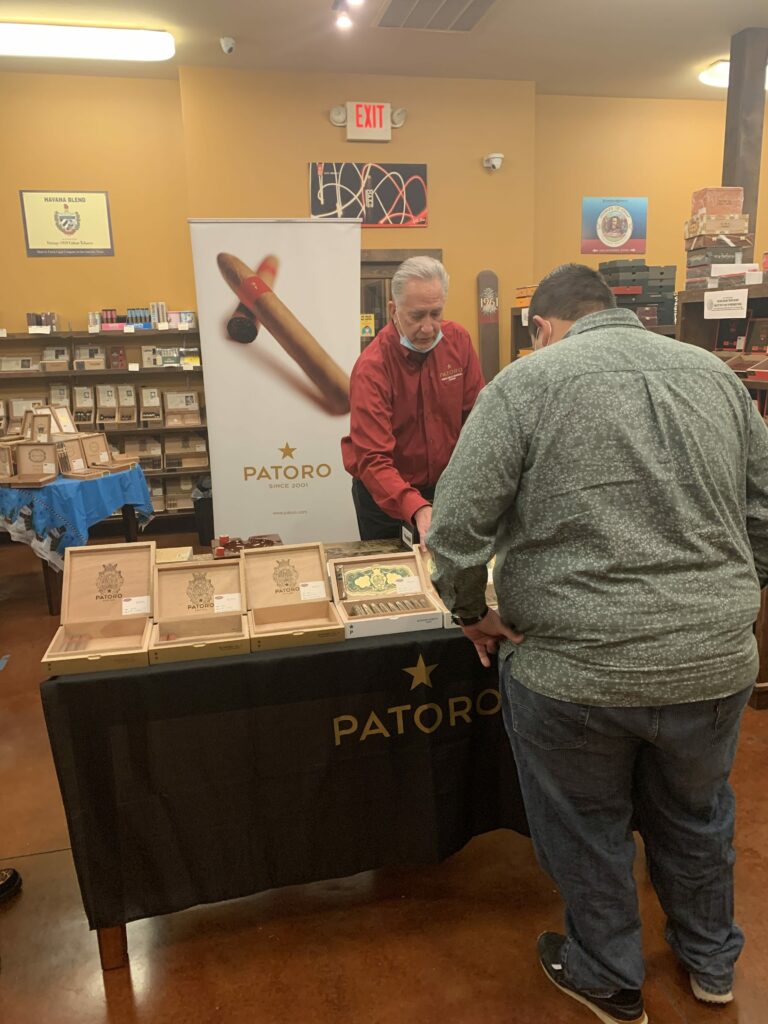 I met Mike Wydra, who is the director of US operations for Patoro at a cigar event at Finks in Helotes, TX. I had the opportunity to thank Mike for something that he didn’t even know he was part of, but (I think) because I had been a customer at Finks before I started Cigar Pals, I had a credibility issue with the management and when I attended this event, and spent time talking to Mike about cigars, they realized that I might have a bit of insight into cigars.

So I got to do an interview with Mike, sorry about the sound, I didn’t have a mic and the background noise was a bit distracting.

One of the high points for me at the show, was seeing people whom I had met traveling around as Cigar Pals.

Wow, This Is Getting Long

Well folks, I don’t know how many words I have, but I think it’s enough for Day 2 of the PCA. Well I guess it’s not too long, just felt like it.

Check back soon, cause I have a lot more to tell you about.

Please feel free to leave comments, questions and suggestions below, and get ready, Sturgis is just two days away and we will have a lot to report on from there and maybe some special guests. I think we are going to be doing some pod casts from out there and you won’t want to miss that.