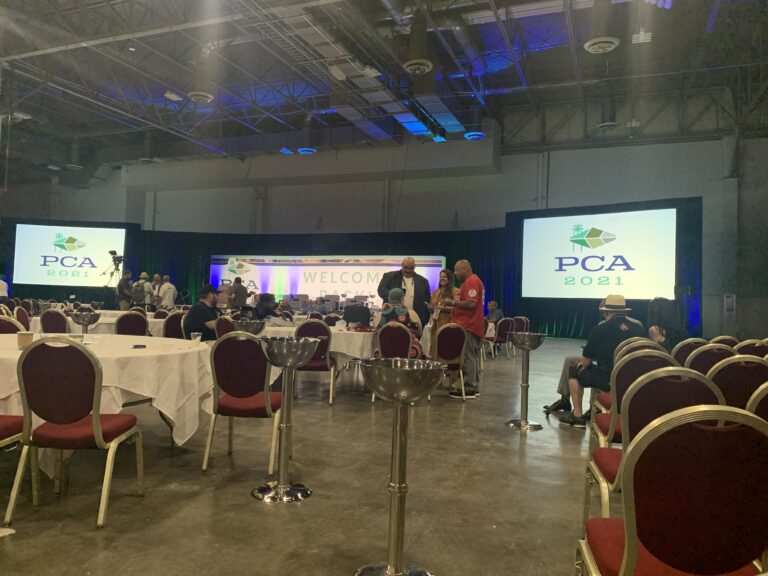 Alright Cigar Pals: Had to do some catching up on the blog, but now it’s time to tell y’all about my motorcycle adventure to the Premium Cigar Association (PCA) trade show, down in Las Vegas.

Being Cigar Pals (A guy who travels around the country (on a motorcycle) there was no way that I was going to the biggest event that I have been to and there was no way, I was gonna not show up on my scooter.

The Road Was Long

When I decided to attend this years PCA we were still in Pennsylvania, and to make it out, and since Deb would not be going with me, we had to get the trailer out to South Dakota.

Since we had had break problems on the trailer and got a rock pitched through the big picture window, we were stuck waiting on the window to show up and when it did, it was damaged and from the factory. The manufacturer will make it good and it will catch up with us somewhere down the road. So they told us to go ahead and install the damaged one the best that we can and cousin Tim and I were able to straighten it out good enough to work.

Here’s how it went, we managed to get to South Dakota a day before out scheduled arrival (in a torrential downpour) and get the trailer set up. 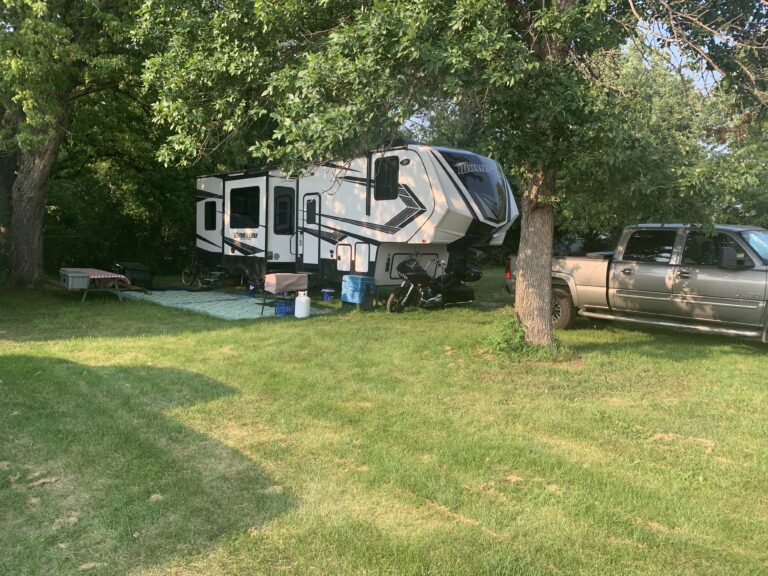 The Trailer In South Dakota

The next day, I took the bike to get fluids changed (I usually do this myself, but time was of the essence) and packed my gear. I was originally going to take the motorcycle trailer with me, but I just didn’t have a big enough window of time and didn’t know what issues would come up, so I opted to leave it behind. As it turns out, that was a good thing. 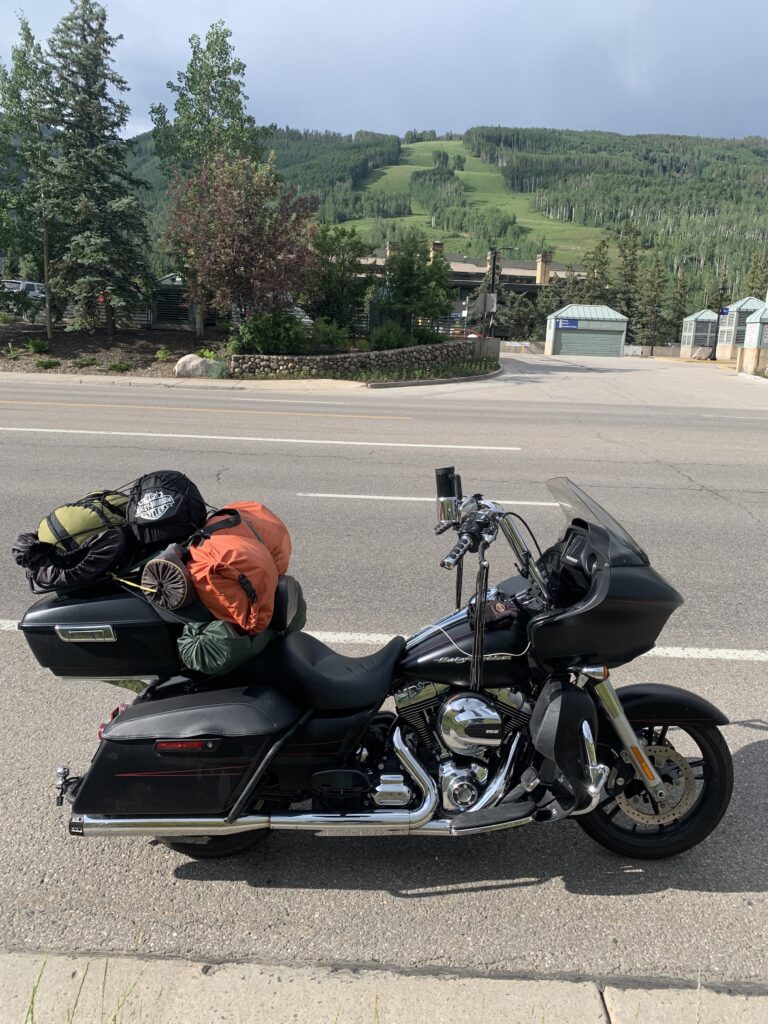 Leaving the following day early knowing to stay on schedule, It was necessary to make Denver by night fall. I pushed hard and made my first goal and got to try out a group It was necessary seen on Facebook called Bunk-A-Biker. The deal is, that people in the biking community open up there homes to fellow travelers (at no charge)

When I got to Denver (actually Golden) Colorado, I met Leslie and her two dogs, who has been part of the group since before it started. She provided me with a nice single bedroom a bath and was able to stow my gear in the garage. She rides an Ultra and does quite a bit of touring herself and while I ate a nice steak dinner, we talked about rides we had in common. 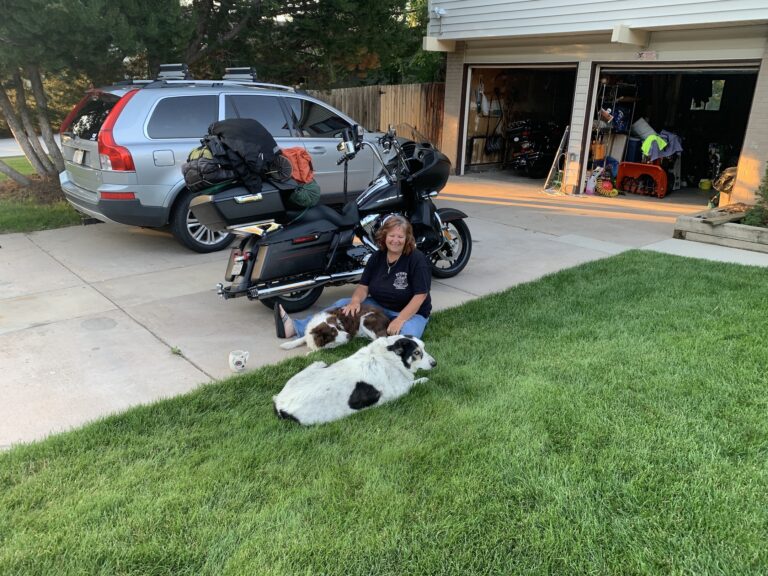 I was up early the next morning and off for Mesquite, Nevada, where I would be staying during this adventure. It was necessary a great ride across Colorado. It was necessary to take the interstate because I just didn’t have time to meander (hoped to do some meandering on my way back).

When I got into Utah, the temperature started going up, but really wasn’t too bad, It was necessary ridden in this country many times before and knew that I just needed to stay hydrated.

All was well, until about 50 miles from Mesquite, when the temps went up considerably. I ride with a pair of gloves with the finger tips cut off, for dexterity and suddenly, my finger tips were burning, making riding very uncomfortable.

Arriving in Mesquite, NV the evening before the trade show began, I was filled with excitement anticipating what it would be like at this big event that It was necessary heard people talking about for the last three years.

I awakened early to temps in the upper 90s, knowing that it was only going to get hotter as the day progressed. Leaving the motel and headed to Vegas (80 miles away (don’t ask why so far away, bad idea, won’t do it again)).

When I got to the Convention Center, I stopped to ask someone where I could park, they told me and when I went to pull away, It was necessary no clutch (Grrrr). I contacted Harley who said they didn’t have a driver that day and I was on my own. I managed to feather the clutch lever enough to get some pressure built back up, consulted the bikes’ navigation system for the nearest dealer ship and took off. (Don’t ever believe Harley’s Nav system, it sucks!)

So I headed north following my NAV and stopping for a million lights and several times to try to get the breaks pumped up again. Finally with the temperature around 120 the breaks not wanting to pump anymore and no sign of the Harley shop that the Nav system said I was near, I pulled into a parking lot.

I will try to shorten this up, I checked my phone and found out that It was necessary been going in the wrong direction the whole time. The shop I was trying to reach, was only a few minutes from where I started. I gave up and called a wrecker.

Sat there waiting for him in 120 degree heat, bummed, because I was missing the opening day of the trade show.

The wrecker arrived and hauled the bike to Las Vegas Harley Davidson. When I got in there and started talking to the service guy, he mentioned that the clutch could be gone and I said, the clutch ain’t gone (getting suspicious), guess who was right (grrrr.*$#%t!). It was necessary been doing most of my riding in the north and winter in Texas, so I never notice any problem with the clutch, but when I hit that blistering hot desert, the problem became very clear.

Those guys were awesome and they put me at the head of the line. Figuring I would be there for a while, I caught an Uber over to the show.

Checkin In And Checkin It Out

I finally made it to the show and checked in, once again, full of excitement, anxious to see what it was all about. So I go around the wall where ya check in and way, way down on the other end, I see some chairs and a big stage (not what I expected)! 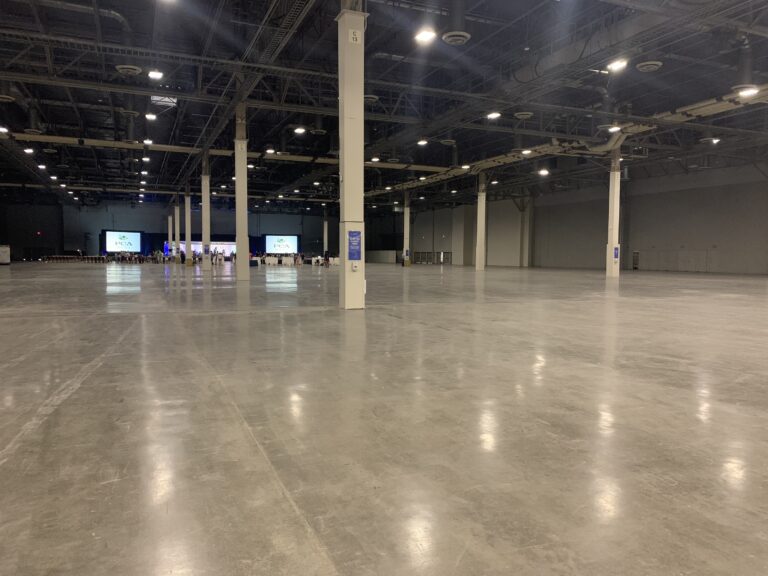 I walked (way, way) down there and there were maybe a hundred people, some coffee and soft drinks and M&M’s. There were some nice chairs, so I grabbed a cup of coffee and sat down and fired up a cigar (there were ashtrays and you could smoke anywhere on the show floor).

There I am, watching, lookin around and thinkin, where are all the vendors, when do they set up? I’m cool, I just look around smiling and act like I know what’s going on (didn’t have a clue).

Then I see Steve Saka and think, Hey, there’s Steve Saka. Then Steve Saka sees me and is probably thinking, hey there’s Chuck from Cigar Pals (probably more like, I think I know that guy, hmm). But wait, he came over and said hi, like we were long-lost shipmates (we actually were both in the Navy). We chatted for a minute and then he chatted with the guy behind me then took off, and although I saw him several times that weekend, I couldn’t get close. 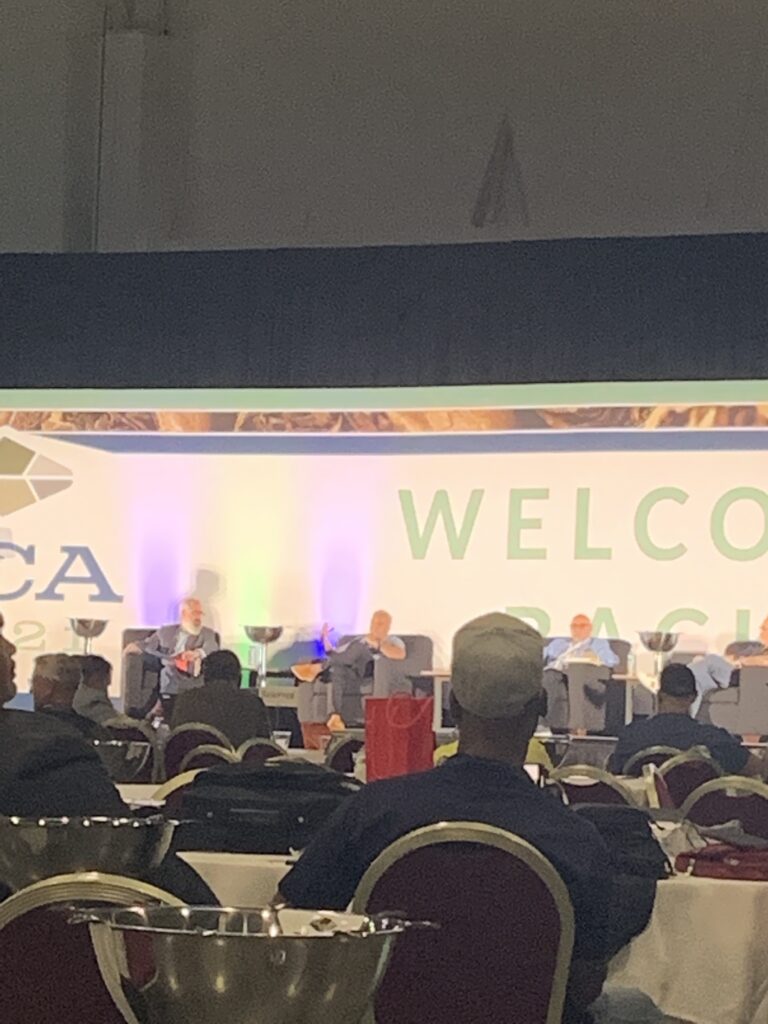 Shortly after that Harley called and said my bike was done, so I called for another Uber and went back to the shop to pick it up (did you know that Uber can raise the price, based on the time of day and traffic?).

The Meet And Greet

After I picked up the bike, I went back to the convention center and after finding out that parking was a long, long ways from the event, I started walking. I asked this nice lady in a golf cart if there was another way in and she said yes, from the parking garage, (which I was already quite a ways from) other wise keep walking.

She then asked me if I would like a ride (of course I said yes and she drove me right into the area where the meet and greet was about to begin. Guess what, I was now right in the middle of the whole trade show and everything was set up. It was necessary been in a different area before.

So I wandered around checking things out and then they announced the meet and greet, I walked in through the side and missed standing in line and watched as everyone filed in (and got their free cigars from Ace Prime) (I went back later and got mine). 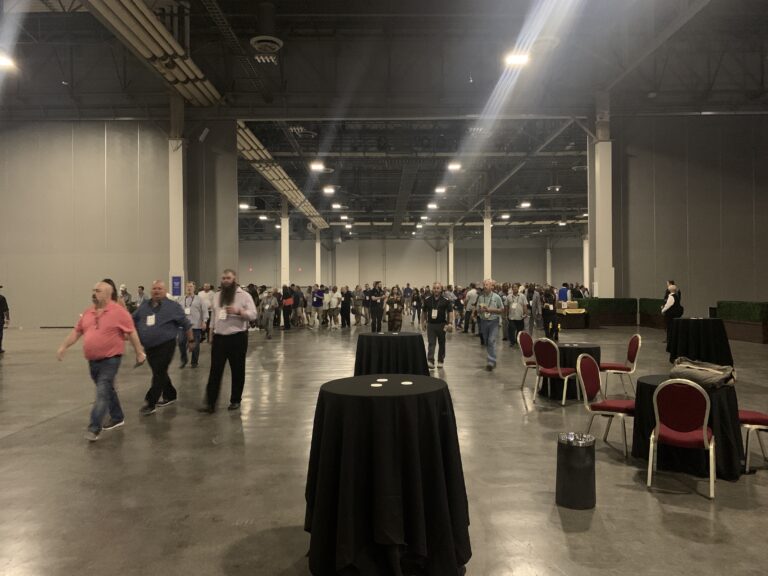 At the meet and greet, I ran into several people that I knew, like Stephen Frank from Humidor Fine Cigars in Dothan, AL, Jon and Scot from Warfighters, and Phil Zanghi of Debonaire and Indian Cigars.

I also met some nice people dressed up in old west clothes from Tombstone, AZ. Their place down there is called Smoke Signals. 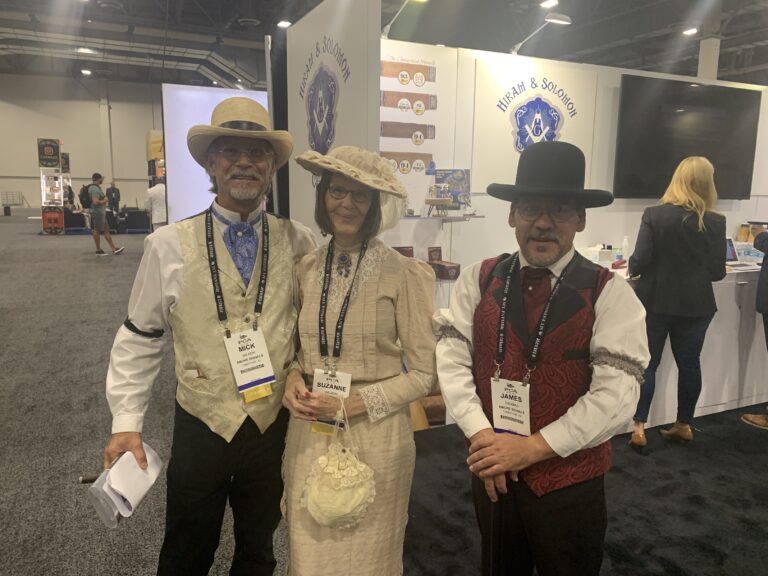 I know the party went on into the night and there were after parties, but I was beat and still had 80 miles to go back to my motel, so I called it a day and went on.

Always feel free to leave comments, questions and suggestions in the space below, I really appreciate it when you do and Google loves me more, when you do.