I finally had the honor of meeting Bryan Mussard of Cattle Baron Cigars. My job is to travel around the country on my motorcycle seeking out Cigar Adventures.

Let me tell you about it!

The Road To Dillon, MT

I left Sturgis excited at the prospect of Meeting Bryan and finding out what makes a successful cattleman want to go into the cigar business.

I had just met Phil Zanghi at The Tinder Box in Rapid City, who is Bryans Blender and he spoke very highly of Bryan.

I set out across the Prairie with the intention of going across Bear Tooth Pass and staying at a favorite camp spot in Red Lodge.

By the time I realized what it was doing, it was too late to back track, since I was expected in Dillon the next day and going across Bear Tooth would not allow me to meet the schedule (I really don’t like schedules)

So I ended up in Red Lodge late in the day, got a bite to eat and went to set up my camp. 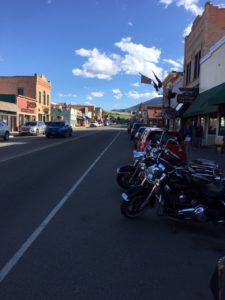 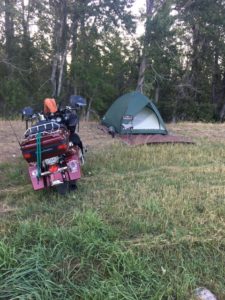 A funny thing happened on my way to Red Lodge: A big ole black bear ran across in front of me and he was flying! I turned around to see where it was going, and that bear never slowed down, I don’t know what it was running from, but must have been something other than me!

Speaking of bears, when I set up camp, there were a few trailers in the camp and one neighbor came over to inform me that there had been a Grizzly behind the camp a couple nights prior.

I don’t mind black bear as a rule, but Griz make me nervous. I figured what the heck, there was a vault toilet a few yards from my tent and I could hunker down in there is one came into camp (and I heard it in time).

So I sat outside of my tent and smoked a cigar, watched a beautiful moon rise and enjoyed the mountain evening.

Awoke the next morning, not having seen or heard any bear and packed up for the run into Dillon (about 260 miles)

Bryan had asked me to come, late after noon and I arrived about mid-afternoon and decided to wander around Dillon to kill some time.

Some times I use the wonders of the internet to get ideas, but some times the brain doesn’t completely engage with the info I receive, such was the case when I somehow deduced that a place called Jim’s Smoke Shop, carried Cattle Baron Cigars. 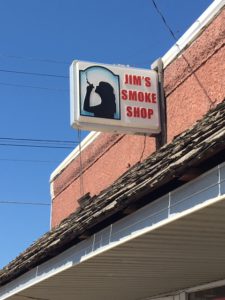 Walked in and introduced my self and started talking about Cattle Baron and Jim just looked at me like I had two heads. Jim knew who Bryan was, but had no idea that he had a line of cigars. (I let Bryan know this, so I may have found him another customer)

I left Jim’s, feeling like a well-informed journalist and went down the street to a place called Atomic 79, after verifying that they did indeed carry said cigars. 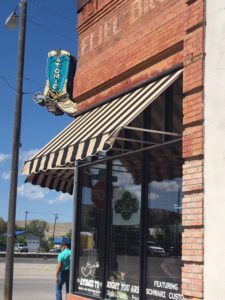 Atomic 79 is a western gear store with everything from boots, hats, buckeles, spurs, saddles and tac to tools and most everything else you might need to be a cowboy.

They make hand made boots and saddles. Bryan told me that you could be waiting over a year for a pair of boots.

Well they do have a special humidor in the front of the store, with only Cattle Baron Cigars and since I like to promote local business, I went ahead and purchase a Trail Boss. 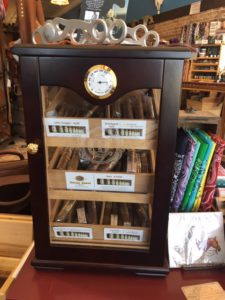 I texted Bryan and asked him what constituted late afternoon in Montana, and he replied that he had been sick that day and canceled an appointment in Idaho.

I offered to put off our visit, but he told me to come on out, so I headed that way.

Once again I used the navigation on my phone, but since it had tried to take me a different way on my way into town, I ignored it and backtracked to where it had said to turn before (that was a mistake)

I ended up on a tractor trail (not good on a 850lb motorcycle with 200lb of gear and my 200lb body) which eventually put me out on a gravel road, that came right out of town and was much simpler.

I finally got to Bryans place and he invited me into his ranch office, which is a house that he works from. We went into a living room where he had a laptop open on a coffee table.

He explained that he was working on his Black Angus breeding and some of what goes into it. It’s rather fascinating, but if I try to explain any of it, I probably wouldn’t do any justice to the amazing work they do there.

I got to do a little Cowboyin in Canada a while back, so Bryan and I talked a lot about cattle and horses

Bryan had just been to the IPCPR in Vegas where he actually sold out of his Cattle Baron Cigars and is in the process of getting more made.

We talked about the fact that sometimes getting cigars from the Dominican Republic can be difficult, which I recently found out with Cigar Pals cigars.

He should have cigars shortly and when he does, we plan on placing a link on Cigar Pals for you folks to be able to order your own Cattle Baron Cigars.

I told Bryan that I had met Phil Zanghi at the Tinder Box in Rapid City and we discussed his relationship with Phil and about Phil coming out to Bryans ranch and spending a week experiencing the cowboy way.

Unfortunately, my time with Bryan was cut short. When we finished my interview, he was jumping in his truck and driving 100 miles to work on some cows the next morning. 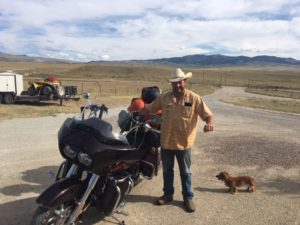 So we had to say farewell for now. On my way out Bryan gave me some cigars and some of that awesome Angus jerky that he makes.

Made Camp For The Night

On my way out, I didn’t know where I was going to spend the night, but Deb got online and found me an interesting spot outside of Whitehall, MT called Homestake pass. 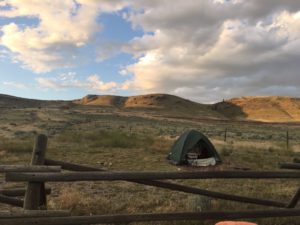 The place was kind of different, it was a huge gravel lot with fence around it and two vault toilets (a bear might like to crap in the woods, but I do not)

There were no good places to pitch a tent inside the fence, but the trail for dirt bikes went through a hole in the fence and I found a good spot, that had been used before on the other side of the fence.

I pitched my tent and had the place with hills all around all to myself. 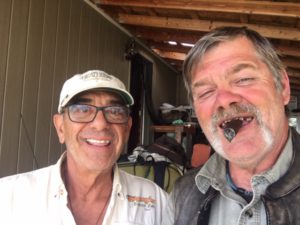 While in Bozeman I stopped by Smoker Friendly and visited with Tomie and Selena. 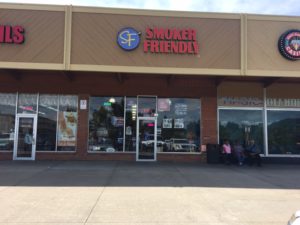 Tomie is new to the Tobacco industry, but has a background in business management.

She has been running the store for about 6 months and I asked her if she was learning a lot and she said Oh Yeah! 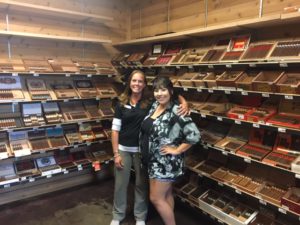 I asked her about top sellers, which she replied that Drew’s Sweet Jane was a big hit (not one I care for, but I don’t like infused cigars).

I had a nice time talking to her and shared some of the pearls of wisdom that I have picked up in the course of being Cigar Pals.

I also signed up for their Free Cigar Club membership program which got me a free cigar, and for each $30 I spent, I got another free stick (I got two)

They have a nice humidor with a lot of popular faces and they are fun to visit with. If you get to Bozeman, you should check them out)!

While I was with Marco, I got to share some cigars with him. This is something that I was taught to do early on in my smoking experience.

Marco marveled at this, but just like I told y’all in my post “The Road To Sturgis” Doug from the Cigar Shoppe in Montgomery, AL hooked me up when I visited him and sent me a care package at Sturgis, so I need to pay it forward

When I left Marco’s I rode over to meet up with Deb in the badlands of South Dakota.

On the way, I stopped in Billings, MT and visited Tobacco Row, which I expand on in my next post “JTL Trinidad Espiritu cigar review”

Well my visit with Bryan wasn’t all I hoped it would be, but people have lives and can’t drop every thing when Cigar Pals shows up.

Hopefully I will have another chance to visit with Bryan and take in more of the operation, but I did invite myself out there and he was kind enough to take time to do an interview with me.

Hope you enjoyed Met The Cattle Baron and another cigar adventure with Cigar Pals.

If you would like to order purchase Cattle Baron Cigars, go here and check out stores. You brick and mortar guys use the same link and contact Bryan directly.

Please feel free to make comments or ask questions in the section below.

Feel free to drop me a line and tell me about your cigar adventures and your favorite cigar bar/lounge/shop!

Maybe I can schedule a visit and we can have a stick!