Every now and then I find a place, that I just have to write about, and yesterday was one of those days. My friends Kelly and Tom, invited me to one of their favorite’s, St Pete Cigars!

So Let’s smoke a cigar and I will tell you what happened. 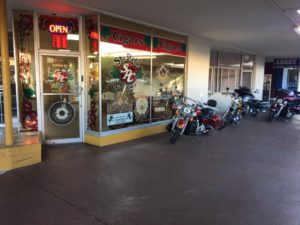 We met at Cutters

I met Kelly and Tom at Cutters in Braden, which is just south of Tampa.

They like to ride their bikes on Sunday and their routine is to go from cigar bar to cigar bar Kind of like bar hopping, just cigar bars are the objective.

After smoking a stick at Cutters and chatting for a bit we decided to go over to St. Pete Cigars in St. Petersburg.

The ride over was quite an adventure in itself, particularly crossing the Tampa Bay Bridge. The traffic was light and at times we were traveling over 90 miles per hour.

I always like to travel with the local, they know the short cuts! 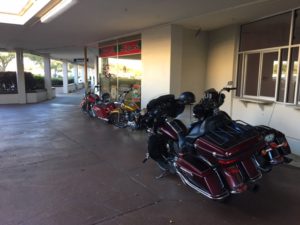 I forgot to get a pic of the key pad used to enter the shop. I would shortly find out that the reason for this was, because Ed (the owner) likes to play cards in the back and it allows the regulars access to the shop.

We followed Kelly and Tom in and right away Mike, whom I know from Sturgis came out to greet me. Next was Ed and he walked up and shook my hand warmly and informed me that he had seen some of my blog posts and was excited to meet me. 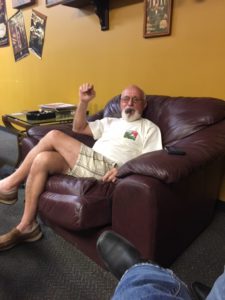 I love it when I get these types of welcomes, because I am immediately encourage to believe that we are going to have some fun and this might turn into an adventure that I can write about.

Unlike some shops that I walk in and introduce myself and they are indifferent. Usually the conversation dies out rather quickly and I am left with nothing to share with y’all.

So Mike and Ed showed me around the humidor, which is in the front of the store where you walk in. 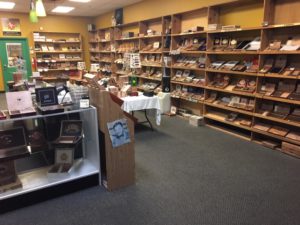 Ed carries a nice selection of the big name as well as some obscure labels. Over all, I am very impressed with the selections he has available to his customers.

We talked about some different cigars and Ed Recommended a (I forgot) and then Tom suggested a (I forgot this one also, I will try to do better), so I grabbed them both.

I didn’t know at the time that Tom would pay for the one he suggested and the one Ed suggested was on the house, so it’s my lucky day! Of course this did leave me with a dilemma, which one to smoke first?

We then retired to the lounge!

Once we were in the lounge we found some seats and some pulled up some chairs into a circle.

Lest you think, I am going to tell you about some fancy cigar lounge, that was not the case! 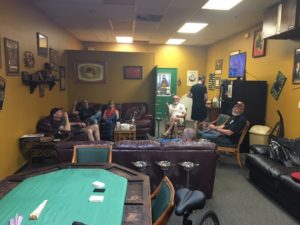 The St Pete Cigar shop is my kind of place. They do have the usual leather chairs and couches and cigar pics and advertisements on the walls, but that’s where the frills end

This is one of those broke in comfortable lounges that I occasionally run into that just feels good to be there.

Ed opened the doors 14 years ago in a 700 square foot place across the portico and after two years got the place that he is in now. 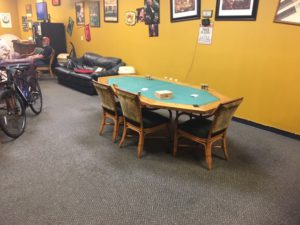 It’s not wide, but it’s deep. The restroom is way in the back of the building and I do mean way back. You have to go through the storage room at the back of the shop to get to it. they jokingly ask if you need them to draw you a map to get there.

When I walked in I noticed that the Daytona 500 was playing on the TV, and having not followed racing in several years, I didn’t think too much about. However, as we sat there smoking at chatting our attention kept drifting to the race and for any of you who were watching, you can understand why.

As the race drew on into the late stages, the crashes began to pile up. Then with just seven laps to go, they had one of the biggest wrecks that I have ever seen in NASCAR.

I believe it took out half of the field, really something to see.

So There Ya Have It

What more can I say, it was just one of those places that I find most enjoyable!

Next time you are in St. Petersburg, Fl wanting to smoke a cigar, stop by St Pete Cigars and visit with Ed and Mike and the boys and don’t forget to tell them that Chuck from Cigar Pals sent you.

Dont forget to leave questions or comments below. I would love to hear from you.