J C Newman Cigars, end of an era? Well it sure doesn’t look like it!

Today we had the honor of Touring the J C Newman Factory in Ybor City, Florida and what a cigar adventure it was.

J C Newman cigars is the only remaining cigar factory in Ybor where at one time, this was the cigar capital of the US and where it all began in this country. 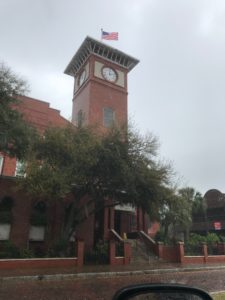 How we got in

When we decided to come to Tampa, one of the things that I really wanted to do when we got here was to have a tour of the J C Newman factory. As the only remaining cigar factory in Ybor, they had to have a very special story. 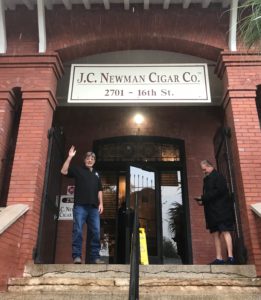 I have been very fortunate since I started Cigar Pal and have had some very rare and unique opportunities come my way.

Deb says that I attract them, I’m not really sure what that means, but so far it has been a wild ride!

When we got here, I was hesitant to just call Newmans, because quite often it is next to impossible to get past the gate keeper, who is someone in the front office who has to screen calls and emails and receives several every day.

I don’t blame these individuals for being careful when it comes to crackpots like me calling in asking for special privileges.

I do however feel that because of the uniqueness of what I do in my blog, I am more or less offering free advertisement. J C Newman will probably survive without my marginal circulation, but that’s not the point.

So when we hit town I immediately started looking around at the cigar bars for someone who had an in at Newmans and after a week and a half of futility, I was striking out!

Then I saw that Drew Newman was on Instagram and I post on there quite frequently, so I messaged him and asked for a tour. A few days later he replied and mentioned that they were weeks away from beginning a year long renovation and I should plan to visit when they finished.

I replied and suggested that maybe it would be a good idea to do a story now and then come back next year and post about all the changes that had been made and he readily agreed (see what I mean about attracting things, I think)

Drew put me in touch with Adria who is the marketing director and we made arrangements to go by for a tour, by the way Newmans no longer gives tours! After the renovation, they will be doing public tours again.

One of the funny things that happened is that we were supposed to be leaving today and we had to rearrange some things to be able to stay for this tour. I find it ironic that this was one of the most important events on my to do list for our trip to Tampa and it didn’t happen until the very last day.

So we arrived at 1:00 pm per arrangements with Adria in the pouring rain ( can’t have everything) She came down and met us in the museum area.

By the way, we met the gate keeper and she has a sign in front of the window of her office that says “Director of First Impressions” We thought that was cute. 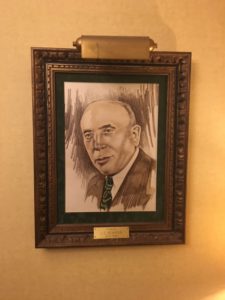 Adria started the tour in the museum area and told us about some of the history of Newmans. Obviously a company that’s almost 120 years old has a lot of history and she could only hit the high points, of which I can only remember a few, but some were quite amusing and those art the ones I will tell you about. 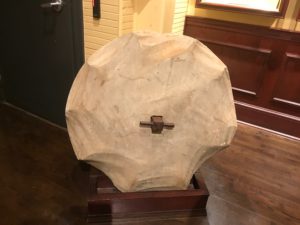 used to sharpen the cutting knives

One that stood out was that when J C first started in his mothers basement in Cleveland, he was rolling cigars down there where his mother stored her canned goods. The story goes, that when his mother opened the preserved food, it all tasted like tobacco, so J C had to find another place to roll cigars.

Another funny event that happened in the course of Newmans was that at one point cigar rollers were paid by the number of cigars they would produce a day. The tendency in the industry during that time was to save time rolling by licking the head of the cigar to secure the cap.

J C did not think this was a very sanitary way to do this, so he set a very lucrative daily wage there by paying his employees to not put the cigar in there mouths and advertised Newmans as the “modern sanitary cigar factory” 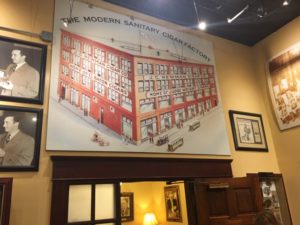 I’m sure that if there was time and we could talk to others in the know, there would be tons of humorous anecdotes in the history of Newmans.

Let’s Check It Out

So after the history lesson, Adria proceeded to take us on a tour of the factory. First stop was a storage room where all the leaves for wrappers were kept.

The leaves are brought in completely dry and then moisture in reintroduced, which was the next stop on the tour.

However before that, she showed us a bundle of pre embargo Cuban leaves, can you imagine that? That bale is over 50 years old and will be on display after the renovation.

We moved along and saw how they reintroduce moisture back into the leaves and it’s pretty cool. They are hung on this huge drum, by big rubber bands and about a 5″ tube blows steam across them which condenses back to water.This process is going on in the basement and while we were down there we went through what I will call the bone yard. This is where they store all the old machinery that is used for spare part, since most of the machines at Newmans are post WW2 and there are no new parts being made for them, so they have to salvage or manufacturer parts for anything that breaks.

Let’s go up to the second floor and see how this process works.

Then we went out on the rolling floor which consist of tons of machines that mechanically roll the cigars, but remember, these are not the type of machines that roll hundreds of cigars an hour like Backwoods and White Owl. 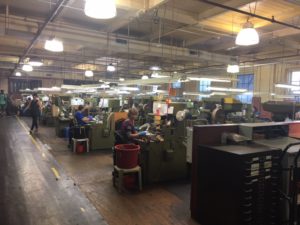 This is 1940s technology, and quite fascinating. Let me explain a little about what they do and some of the mechanics.

While what they do could technically be called machine rolled (an expression that made Adria cringe) They get their tobacco from the big cigar companies like Fuentes and it’s not bad tobacco, this is the cuttings from tobacco that was actually used in a premium cigar.

When you hold the leaves up, before they are shredded, you can actually see where they were cut while rolling a cigar.

True this is short fill, but not in the traditional sense.

I watched as the machines rolled these cigars and being of mechanical nature, I was fascinated and had to investigate every aspect.

There is a lady who places the wrapper leaf on a plate and then there is a machine similar to a Bunchera like that used to roll the filler in the DR. There is a big roll of what looks like paper that serves as the binder.

This roll is actual tobacco that has been sent through a process similar to how paper is made.

After the binder is rolled around the filler, it goes to a cutter that cuts it to length, then the wrapper is installed with a cap.

I was mesmerized by the process and could have watched for a lot longer time than was available, but we did get video of it.

We then moved on to where the banding and cellophane was installed and of course there was a machine for that too!

Follow that with bundling and there you have it.

What’s On The Horizon For JC Newman Cigars

One of the things that Adria showed us and I am excited about is a brain child of Drew Newman called the America.

This is a cigar that is completely American made. This is not made by the machines, but all hand rolled her in the good old USA, by Americans, using only American tobacco’s. Even the packaging will be with recycled American paper.

At the end of the tour we got to see where they are rolling these cigars and after the renovation there will be a factory inside of the factory just for these cigars.

Newmans has a partnership with A Fuentes and their Diamond Crown line of premium hand rolled cigars and also manufactures in Nicaragua their 90+ rated Brick House premium cigar.

Newman’s has withstood the test of time and has continued to thrive.

I noted to Adria, that it was interesting that J C Newman was a late comer to the cigar industry in Ybor City not having arrived there until around 1898 about 10 years into the big boon and yet they were the sole survivor.

Newmans is dedicated to being, not just a place to make a paycheck, but a place where people feel a part of something!

So What Can I Say

Newmans is an amazing story and I’m sure they have had their rough times along the way, but they stuck it out and toughed it out!

Those machines came after the depression and the World War. I have heard it said that one of the things that America failed to do after the war is to retool!

This is said in reference to not changing over to the metric system, but while not directly related to Newmans I can’t help but correlate the thinking to what Newman did and probably a big part of why they are still standing!

We had a great time and I commend the folks at J C Newman Cigars!

Maybe it is the end of an era, but it appears to be the beginning of a new era!

I have every intention of coming back next year after the renovations are complete and reporting on this new era in the life of J C Newman.

Please feel free to comment or ask question in the section below.