Today I had an amazing cigar adventure.  Paul and Pastor Dave invited me to meet an amazing individual by the name of Hector Marquez. Steve from the Cigar Shoppe also accompanied us.

Along with the privilege of meeting of Hector and his lovely wife Lisa, 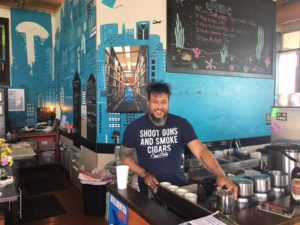 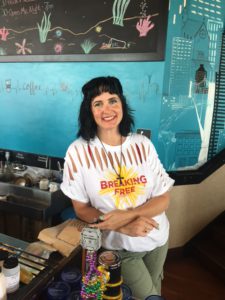 Lissa and Hector Marquez at the Dirty Pickle, which is a boutique coffee shop in New Castle Pa are also the owners of Jacobs Ladder, which is a very specialized infused cigar business.

Who is Hector Marquez

While Jacobs Ladder has only existed for three to four years, Hector who is a native of California has been in the cigar business for many years and has rubbed elbows and smoked cigars with some of the biggest names in the tobacco industry.

Hector spent 10 years on the California Highway Patrol (CHP), and during his time there worked in the dignitary protection department, where he made contacts who would later play a significant role in the growth of his cigar businesses and culminating in his current endeavor with infused cigars.

Where did the adventure begin

He smoked his first cigar in 1999. He was hooked almost from the beginning and told me that one of the first things he noticed about cigar smokers is that we are a community!

we both got pretty excited when we started talking about this aspect of the cigar world because I feel the same way. We are a special group of people who are passionate about cigars and there is no discrimination among those who smoke premium cigars

Hector had a mentor who taught him about cigars during the boom years of the cigar industry and because it was so hard to infiltrate the cigar world at that time due to the fact that everyone wanted in, the big cigar companies could make insane demands on the little guys.

if you wanted their cigars, you had to purchase large orders of their less than and even unpopular cigars that you knew you couldn’t sell in the hope that that they would send you something that would move.

For this reason and the fact that he is bilingual Hectors mentor invited him to accompany him to the Dominican Republic to look into blending their own cigar. Hector says that the trip to the Dominican is when he really fell in love with cigars and the whole process.

they ended up creating a 50/50 blend and at about the same time they purchased a cigar store. Their blend was a success and they sold it out of their store and shipped all over the country.

as I mentioned earlier, Hector made a lot of contacts while at the CHP and many of those contacts became customers thus elevating them into the ranks of celebrity cigar providers ( Don’t know if that is actually a category, but you get my point)

The first cigar they put out was the Selecione Marquez which was a 50/50 blend and from there they developed Liberty Cigar Company. Hector wanted a different blend for his own personal smoke and developed an 80/20 that took off and became a big seller for them.

This shop prospered and they eventually became quite successful and were able to receive distribution with the big name companies and could get anything they wanted. At about this time Hector was getting burnt out on the business end of things and it was no longer fun for him, so he walked away from the store.

How Jacobs Ladder was born 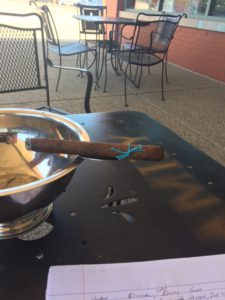 Hector stayed away from the cigar business for twelve to thirteen years, though he still maintained his love of cigars and continued to enjoy a good stick, he just had no desire to be involved in the cigar business.

His wife Lissa however had other ideas and would ask him when he was going to do something with cigars. Hector is a man who keeps a lot of irons in the fire, between the coffee shop and the restaurant and hobbies and family, he says he really wasn’t interested in starting another cigar company.

Eventually Lissa prevailed and after much deliberation and consideration of their Christian faith, they decided to look into the idea of infused cigars. They talked about how in the book of Genesis in the Bible, it mentions how different burnt offerings smelled pleasing to the Lord and about burnt offerings to the Lord and they started looking for references to things that were part of the offerings and the oils that were mentioned and started wondering if they could infuse a cigar with these.

Along with this they started thinking about when Jacob had the vision of the Angels coming down and going up to heaven and they equated that to the community that are cigar smokers, where even though two people might never meet apart from a cigar, they become one and find themselves on even ground. The business man shares common ground with the garbage man. The CEO can chat with the biker. Lissa says it’s like bringing heaven down to earth.

Some might thing that a lofty statement and the church crown would probably argue the point, but anyone who has shared the experience of an fine cigar and good company will tell you different.

So they decided to start a line of infused cigars and set about developing a unique product. They first had to find a great “any time” cigar that they could infuse.

Hector met a man at a trade show in Miami who was having a hard time moving his personal line of cigars and he helped him make some contacts in the industry, not thinking about the fact that he himself was looking for a cigar for his infused cigar line.

Later, after returning from the show he realized that he had just blew by the answer he himself was looking for. He made contact with him and told him what he was looking for and the started working on the blend which would become Jacobs Ladder. They decided on a 100% Nicaraguan  aged 3-5 years, blended with 5 different types of tobacco with a Habano wrapper.

Next Hector began working on the infusion process and this took quite a bit of experimentation. As I said they wanted to use items mentioned in the Bible that the priests used in their ceremonies and found that some were cost prohibitive or just didn’t work well in the infusion. Once they found what they believed would work, they had to work on the formula. Hector and his friend Seth laughed as they told me about some of their early attempts and how while they didn’t get buzzed, they found they definitely had a lack of ambition and just sat their not wanting to move.

Finally they worked it out and came up with a fine infused cigar that is a good any time stick. Which means you will enjoy it first thing in the morning or late at night, with a cup of coffee or a shot of whiskey, or after a nice steak.

I believe that Hector and company have come up with a fine infused cigar that is totally unique and refreshing stick. It is medium to full flavor, but in no way harsh. You pallet will really be surprised by the infusion. I can’t describe it, due to the nature of the infusion. I do have to say that it is most pleasant.
Hector tells me that he has no grand desires for his cigars as far as becoming a big producer. He sold about 2000 sticks last year and would like to increase his volume. He knows marketing and could probably do very well with his infused cigar, Jacobs Ladder, but that is not what he is about with this cigar.
They do desire to share their Christian faith and their cigars do not have a band, instead there is a blue string around them in place of a band and when someone asks about the string, that gives them an opportunity to talk about their faith.