Howdie Cigar Pals: Deb and I got to hang out with Brian Mussard, The Cattle Baron of Cattle Baron Cigars about a week ago. 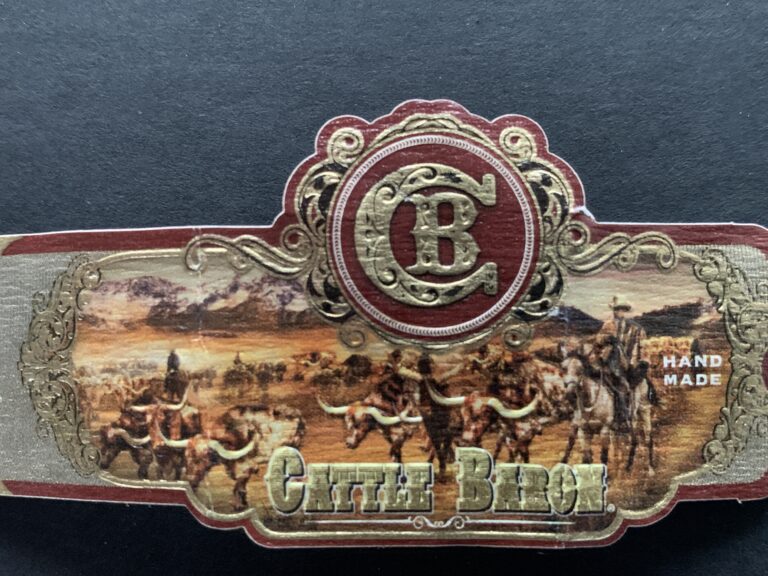 Hopefully you will remember that I have reviewed their cigars a couple times and did an interview with Bryan at his ranch outside of Dillon, MT last summer at around this time.

From the first time I saw Cattle Baron cigars, I thought, that is a cool niche and immediately wanted to find out more about them.

I think that the first time I heard about Bryan’s Unique brand of cigars was on Instagram and I sent him a message, asking if he would like me to review his cigars.

He replied that he would and asked for an address where he could send me some. Cigar Pals was pretty new at the time and I really was just fishing for anything to do that might interest you, the readers.

About the time that I got the cigars from Bryan, is when Debs trailer burnt up and I wasn’t able to get to the review, right away, but we found ourselves up in Minnesota on a job and I did the review of the “Cowboy” outside of the hotel.

All Cattle Baron cigars are the same blend with different wrappers and I haven’t found any that I don’t like.

They are not real complex, but have smooth rich leather and nut flavor with a baker’s chocolate undertone. These sticks stay the same throughout, but I really like them.

What’s So Special About These Cigars

One of the things that you will learn in this video is that a lot goes into why we perceive a cigar the way we do.

I am an avid reader, and I especially love reading westerns. I also have had the opportunity to work around horses and cattle a some (I have even branded cows)

That said, I know the smells that surround a ranch, like barns smells such as hay and wood and leather as well as the smell of a barnyard, get the picture? 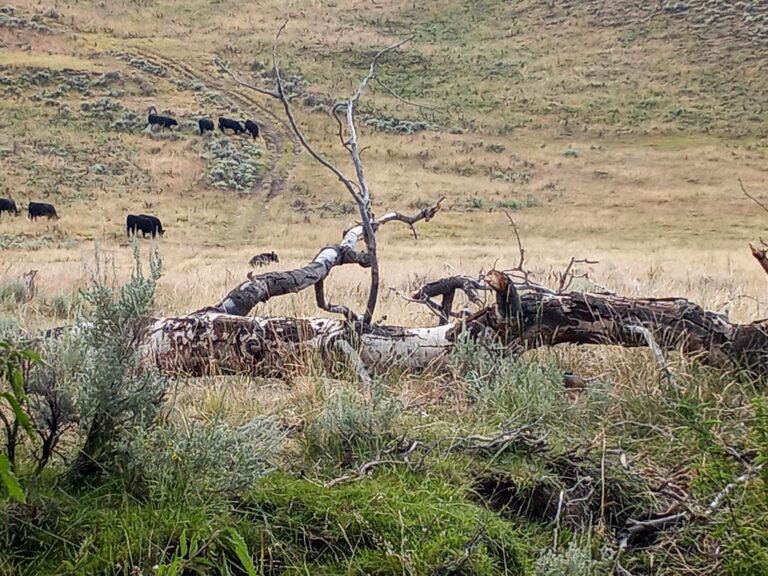 When you hear me or someone else doing a review we smell or taste something in the cigar that reminds us of something we have smelled before.

No cigar manufacturer puts, leather or peanuts or chocolate in their tobacco, it is just a combination of what we are reminded of and life experiences that we sense when smoking a cigar.

With Bryan’s cigar, I am infatuated with the old west theme and his cigar draws me into the old west with its bold flavors and aroma.

When I smoke a Cattle Baron, I am a cowboy, out on the range, under the western sky. I am remembering the wild times of yesteryear.

Interestingly enough, our latest cigar adventure with Bryan had just such a theme in mind!

Smoking With The Bulls

Deb and I recently spent several weeks in Idaho Falls, ID and I had talked to Bryan about coming up to Dillon to spend some time on the ranch and talk about doing some business.

Dillon was only about two and a half hours North of us and ya never know when we will be back out this way.

We were getting ready to leave Idaho and I contacted Bryan to let him know and we talked about a couple ideas for a visit with them and ended up with the idea to go out and smoke with his bulls.

Bryan really is a cattle rancher and raises Black Angus Bulls. I will tell you more about that in a minute, but first!

So we met Bryan at his new ranch house (which is being built) about 20 miles west of Clark Canyon Reservoir at the base of Red Butte along Horse Prairie Creek.

He had us follow him a couple miles down the road to the entrance to the land where he has his bulls out in pasture ( a little over 8000 acres, I believe).

We parked the trailer and got into his Bobcat 4 wheeler and off we went across the country. We wound through the hill, ascending ever higher into the lush hills, until after going through the second gate, we started seeing some of his bulls.

Not there yet though, we continued ever higher and finally approached a small ravine with a cluster of willow trees on the other side and several black Angus bulls leisurely resting beneath them. 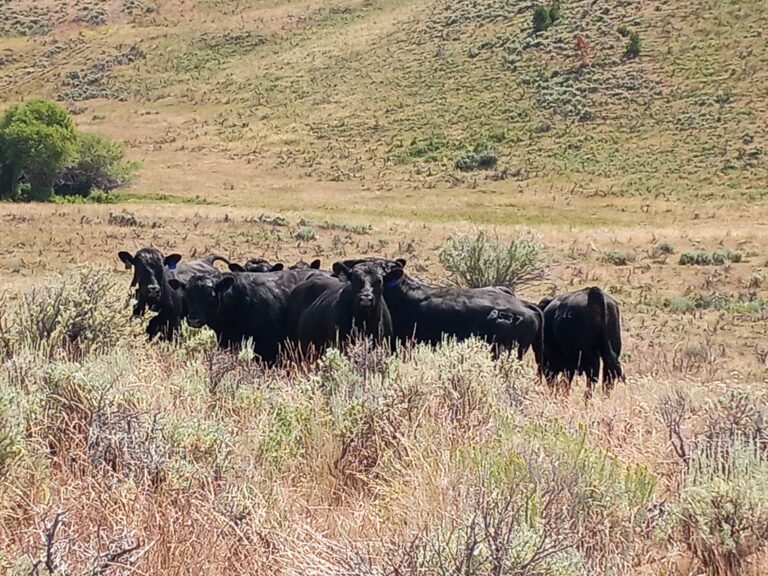 As we sat there looking at the bulls and taking pics and video, it was plain to see that they were not as happy to see us as we were to see them.

This became even more obvious, when Bryan motored us right up next to the willows and the bulls scattered.

We exited the Bobcat and Bryan pulled a log around for us to sit on and then he plopped down on the ground and leaned back next to the base of a willow tree. 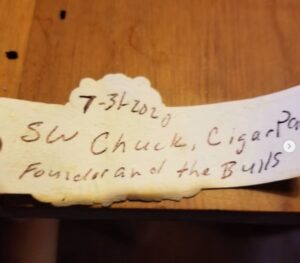 Bryan writes on bak of band, the date, who he is with and the event

We fired up our Cattle Baron Bull cigars and sat talking about cattle ranching and some cool stuff involved. 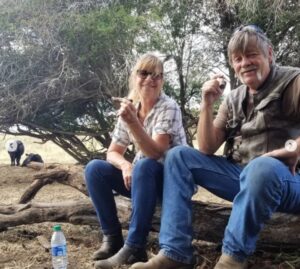 Deb and me Smoking with the bulls

They artificially inseminate the cows, but only about 50% are impregnated that way, so then they turn the bulls out with the cows and because these are purebreds, they DNA test the calves to find out which bull is the father (I bet they have a name for that guy, I know in horses it would be the sire)

As we smoked and chatted, the bulls were all around us (not right next to us, but at times some were within 50 feet of us. 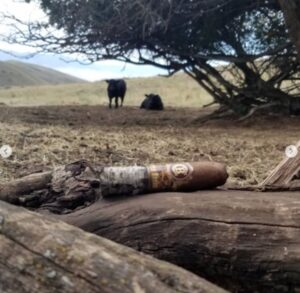 Of course, we also talked about cigars and I shared with Bryan, the technique that I recently learned about how to taste the flavors of a cigar.

I asked Bryan about how he chose the blend for Cattle Baron Cigars and he told me that he wanted a cigar that tasted like what he smelled before the cigar was lit.

This is kind of interesting, because I don’t usually find a cigar tasting the same as the pre light aroma.

As we sat smoking and watching the bulls, I was reminded of a joke that I heard a while back and I told it to Bryan and Deb and wished that I had recorded it. Since I didn’t I will include this extra video for y’all, so you can hear it.

We actually smoked two cigars, while we were out there. I had given Bryan my last Sin Compromiso, one of my favorites by Steve Saka and he smoked that and I think my second stick was a Drew Estates, Factory Smoke Maduro.

So it was getting late and there were some ominous clouds rolling in around us and we figured we better git, while the gitten was good!

We jumped back in the Bobcat and started heading back to the lowland, and we topped a rise looking out over this majestic valley, and could see the rain out ahead of us.

The view was breathtaking, but that rain didn’t look good and we needed to go set up the trailer, before meeting Bryan at the local steak house for dinner.

We dodged the worst of the rain, until we got back to the truck, but we no sooner got to the truck and the bottom fell out.

This was a free campground run by the Bureau of Reclamation and these are very well maintained for free!

Deb and I had a wonderful time with Bryan, smoking with the bulls and we appreciate him taking time out of his busy schedule to take us on that awesome cigar adventure.

If you look to the right of this post, you will see a pic of a Cattle Baron cigar band and if you click on the pic, you will be taken to the Cattle Baron website where you will find their email and phone number and can contact them to get some of their cigars.

Don’t forget to tell them that Chuck at Cigar Pals sent you!

As always feel free to comment, ask questions or make suggestions in the section below and don’t forget to subscribe in that big purple box, so you don’t miss any of out cigar adventures and cigar reviews