Well Google is always telling me that I don’t post enough, so I decided to try to post more often.

But what should I post about? Then someone else suggested that I should do more reviews, OK, so what shall I review?

Oh, I’ve got it! I will post Cigar reviews!

So today class, we are going to be taking a look and a puff or two, OK, a lot more than that, of the Gurkha Ninja!

For those of you who get bored easy, don’t worry, thay’s a picture show (video)

I am not really a Gurkha fan! Several years ago, when I first started smoking cigars, someone turned me onto Gurkha and for a while, I really enjoyed them.

But after a while it seemed like they became inconsistent and I couldn’t count on getting a good stick. Particularly ones that were rolled to tight and anyone who know me will tell you that nothing irritates me more than paying for a cigar that about caves my head in when I draw on it!

So last night I was working on the blog and having a stick or two ….. OK, so it turned out to be three (but who’s counting) at Tampa Humidor and I saw a five pack of Gurkha Cigars and on a whim, went ahead and bought them. 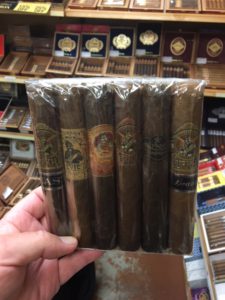 Then this morning I woke up with this overwhelming urge to review a cigar (cause google tells me I need to post more often) and when I was looking through my humidor to see what would be good to do a cigar review on, I picked up the Ninja and thought why not.

After all this would be a good opportunity for me to slam Gurkha!

The Cold Draw and First Draw

I settled myself in one of my favorite smoking areas, under the porch awning of the trailer with a cup of coffee

Truthfully, the smell and cold draw was not very impressive. Really not much to it and I expected very little from there!

So I went ahead and toasted and torched it and the first thing I noticed was that the draw was a little tight, not enough to cave my head in, but slightly annoying.

So I’m thinking…. Gurkha your mine!

But not so fast bubba, there is some flavor here….earthy with a little spice

OK, let’s smoke awhile, I can always pitch it later

Through to the half

As I smoked along, I found that the’re were some pleasant nuances coming through, quite subtle, but definitely there.

This was turning into a nice experience and even though it is supposed to be a medium to full flavor cigar, I would strongly rate it as a fine morning stick.

The Ninja is make up of a dark Brazilian maduro wrapper, a Dominican Criollo 98 binder and Nicaraguan and Dominican filler.

This really was turning out to be a surprise for me, guess I won’t get to blast Gurkha on this one!

Second Half and Gran Finale

Rolling into the second half, I noticed that the flavor was staying consistent throughout the cigar.

I had let Deb have a few puffs early on and her word for it was “smooth”. I invited her to check it out at about the end of the second third and she was still impressed with how smooth it was….can’t argue with that!

Between the second third and the band, I started to notice that it was increasing in intensity and I was starting to feel it on the retro hale.

Even at the end there was still a nice mix of flavor. As I said earlier, I caught earth and spice. I also noted hints of chocolate and coffee

Would I smoke another one

Would I smoke another one….absolutely! This is a $6 – $7 stick and well worth the money.

The smoothness and the flavor in this little gem was really a surprise and I would recommend it to any of my Cigar Pals!

I guess Gurkha escaped the chopping block this time and I am pleased that I did this Gurkha Ninja Review!

I’ll get you next time Gurkha!

Thanks for checking us out and don’t forget to leave comments and questions in the box below.