I was finally able to get out on a cigar adventure yesterday, down in Conway, AK.

During this pandemic, I have been ordering cigars online, and let me tell you, the mail is anything but dependable.

From what I am seeing, the only ones who have their act together is Amazon. and yesterday I found myself in a situation where I have cigars coming from around the country, but none expected to get here earlier than next Thursday.

Yesterday, I found myself down to 3 cigars, except for ones that I plan to review, and I have even been smoking some of them.

My back was against the wall and I started doing a Google search to find a cigar store and then got on the phone to see if anyone was open.

I found a cigar lounge down in Conway, Arkansas called West End Cigars, called down and they were open!

Load Up Deb, We Are Going On A Cigar Adventure

I Really didn’t know if this would be an adventure, because all I asked them on the phone is, are you open!

So we took off in the truck (had some errands to run that we couldn’t do on the bike) and drove 50 miles to get some cigars.

Arkansas really didn’t shut down, they are taking precautions, but businesses were able to stay open.

There was actually quite a bit of traffic on the road. 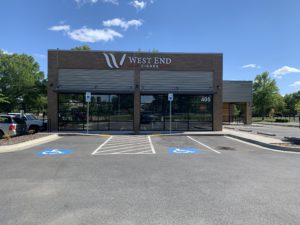 We made it down to West End cigars and the parking lot only had a few cars in it. We walked in and were greeted by Jason, who is an employee and has only been smoking cigars for about four years, but he is very knowledgeable about cigars and the cigar industry. 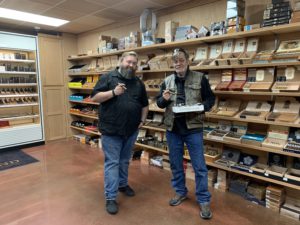 I gave him my card and told him who I was and what I do and we he began telling me about West End Cigars.

They have only been in business for about four months and two months in, they get his with this pandemic. I said that has to hurt, being a new business. They didn’t even have time to build a clientele.

He said, that the people who live in Conway, have been very supportive and while they are not getting rich, they have been able to stay afloat. 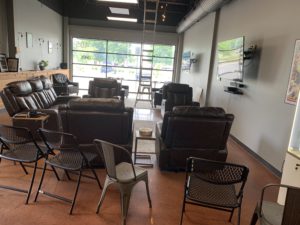 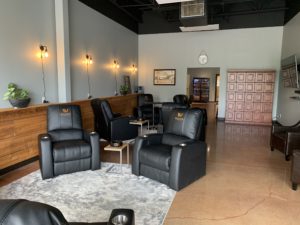 They have two really nice lounges, a members lounge and one for the public. Unfortunately they have not been able to open the lounge part of the store, but people can come in and get their cigars (exercising social distancing, limiting how many people can be in the store and the humidor) and be on their way.

To The Humidor Batman

I had been scoping out the humidor since we came in and figured that it was a good time to edge that way. They have a large humidor with a lot of name brand faces surrounding the outside walls. I didn’t ask, but their is plenty of room for them to bring in more cigars in the future. 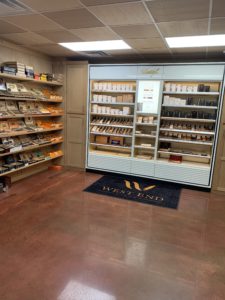 As I said Jason is very knowledgeable and we were in the humidor for quite a while talking cigar while I was filling my hands and arms with cigars.

Deb was even running low and kept coming up and handing me cigars, at first I thought she was picking them out for me, but that was not the case.

They are anticipating the ban being lifted on May 18 and Jason told me when I got their that Brandon McKinney (the owner) was out getting a dimmer switch for the lights in the members Lounge.

While we were in the humidor Brandon came in and I went through the introductions again and then was tag teaming both of them (I think I was starving for cigar interaction, or it could just be my normal “kid in the candy store” persona). 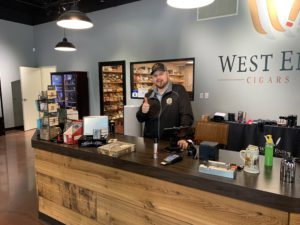 Brandon is very knowledgeable of cigars and the industry and I enjoyed talking with him. I found out that he also has a store in Little Rock and I think he said that store has been open for 6 years and is fairing much better than the one in Conway.

The Whole Cigar Industry is Suffering

I know firsthand that the whole cigar industry is bleeding, because I have been trying to get some Cigar Pals Cigars and this was further corroborated by Brandon, who told me that they are having a hard time getting cigars.

This pandemic has crippled businesses around the world and many of the cigar manufacturers are in the same boat, then you have the mail services who aren’t running with any kind of efficiency, especially the U S Post Office.

You may remember that I told you that I was going to be doing a review of a Steve Saka stick called the Dondurma. Steve only made 1000 of these cigars and does not plan to make anymore.

I ordered 10 of them from Ronnie, who owns Secreto Cigars in Ferndale, MI. Ronnie sent them out special delivery all over the country. I was 50 miles from him.

People in Hawaii, Oregon, Georgia, Arkansas and several other states, got them in a few days. Mine took over two weeks to get to the campground I was at in Michigan and they just forwarded them on to Arkansas and hopefully we will get them next week.

By the way, I will be doing a contest on Cigar Pals where I will give two of them to the winner, more info on that to come!

I have to tell you, it was great to be out in a cigar environment again. We were their for quite a while and I spent way more than I planned on, but running so low on cigars, in the present environment was kinda scary.

I hope to get back down their on the Harley, because that’s who I am and what I do.

Keep safe out their and: