Wow have I got a story to tell about Eladio Daiz 60th Birthday Review. I hope you will stick with me to the end, because this story takes a crazy turn that I think will amaze you, cause it sure blew my mind.

So How Did I End Up With These Cigars

If you look back to my posts in December you can read about how I met Eladio Diaz, who is the master blender for Davidoff Cigars in the Dominican Republic

That was a crazy turn of events that started with me arriving in the DR only having one cigar adventure lined up and the next thing I knew, I met Eladio, Toured E P Carrillo, met the boys from Profeta Cigars and a whole host of other events that unfolded when I met one man…Jose Alba!

Alba set up my meeting with Eladio and I got to interview him for an hour and at the end of that time, he presented me with 6 cigars, to of which were his 60th birthday cigars.

I don’t know for sure, but have been told, that the 60th are worth a considerable amount of money. When I found this out, I thought, I didn’t realize that I had made that great of an impression, then I thought… what am I going to do with these cigars?

I’m a guy who rides around the country on a Harley having cigar adventures, I don’t have anywhere to keep expensive cigars

Then I thought, wow, this guy gave me some special cigars. I have since read that Eladio only gives special people his birthday cigars.

I am still touched by his kindness to an old cigar smoking biker!

Should I Smoke One

In the months that have followed, I have asked myself and others this question. How could I not smoke at least one. I mean this is a rare cigar and I have two, shouldn’t I at least try one?

I vacillated (thunk on) this for a few months and finally decided that I should at least smoke one, but it had to be a special occasion and the setting had to be considered carefully.

Well recently, I was on a very difficult job and I kept thinking, if I make it through this job, I’m going to smoke one, cause finishing it would be a special occasion to me.

So I Smoked One Of Eladio’s Birthday Sticks

I finished the job and prepared to try out one of these special cigars. Deb helped me set things up.

I mention Deb occasionally, but y’all really don’t know who she is. Debbie is my right hand here at Cigar Pals, and the list of things that she does to help me keep this blog afloat is endless 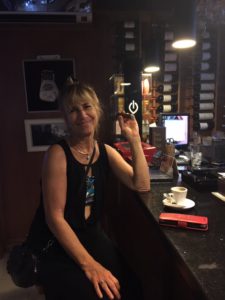 Deb in the DR

She is my editor, she handles the finances, she’s in charge of Cigar Pals Cigars and has been busting her butt to get us some more of those awesome sticks. She is constantly encouraging me when things don’t go well, which they quite often don’t, because the computer side of this thing is very intense. In essence, she does everything that I don’t have time to do and I appreciate her more than she knows and you should too.

The video that we made of me smoking the Eladio Diaz 60th Birthday Cigar is casual and the lighting isn’t that great, but I hope you enjoy the spirit of it and feel like I have invited you to join me on this rare occasion.

Now For The Insane Part

After we made the video, we packed up and headed out of South Florida, on our way to Minnesota. We stopped by Greg and Susie Yorks on the way up for a night and then headed on our way, next stop, Valdosta Ga.

I was anticipating getting to stop in at Stogies Cigars in Valdosta, Ga and new that it was the first Friday of the month and big doings at Stogies.

Deb was anticipating getting to see her friend Carry and as usual we got the space right next to hers.

We had to fight a lot of traffic and a wreck just south of Valdosta and pretty much got here just in time for me to make a coaching session with my blog coach. I went to Stogies to use the WiFi and Deb stayed at the campground doing laundry.

After my coaching session, I went back to pick up Deb and head back to the party at Stogies. We stopped to get a bite to eat and then headed to the cigar bar.

We had barely gotten to Stogies and Scott the manager, started mentioning something about someone calling, talking about a fire. I thought he was kidding around and played along.

We Hung around smoking and chatting with folks about cigars just having a big time. We were outside and Scott came out and said there was someone on the phone asking for Deb.

Deb answered the phone and it was the paramedics and they had Carry and she wouldn’t let them take her to the hospital until she talked to Deb, because she blew up her trailer! 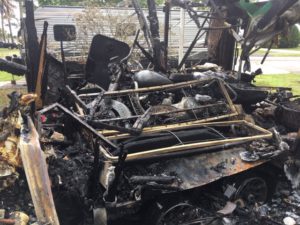 Oh no, the first question was, are you OK? She was not physically injured but was emotionally distraught over what happened.

Here’s the short story: Carry asked me to jump her motor home off, since she had not started it for a while and the battery was dead. So I did.

Her RV was running when Deb and I took off for the cigar bar. When she went to turn it off a while later, she heard a pop and flames began engulfing her trailer. She grabbed the cat and threw her out the door and jumped out just in time as the flames overtook the RV.

The fire then spread to our Toy Hauler, where my Harley was tied inside and burnt is to the ground.

This Is The Amazing Part

I was talking to Scooter Tramp Scotty on the phone the next day as we were inspecting the damage and telling him that that last Eladio Diaz 60th Birthday cigar had just went up in smoke, with no one having the pleasure of being on the drawing end and I looked over and saw a box shape.

I got closer and realized that it was my humidor. I prized the lid up and low and behold, the top tray where my more expensive cigars were located, was completely intact. The bottom of the humidor was full of water and I lost everything down there, but the 60th birthday stick is just fine, other that being a bit more humid that it should have been.

I didn’t get a pic with the cigars in it, I was more concerned with getting them to safety, but I couldn’t believe that humidor held up in that fire!

So the bottom line here is that no one was injured. We are bummed out and it will take some time to recover from this disaster, but when it’s all said and done “its Just stuff and can be replaced.

We will be OK and will go on having cigar adventures and enjoying life!

Please feel free to comment or ask questions below