As y’all know, we recently spent some time in Dothan Alabama and unbeknownst to me, they have an excellent cigar scene in Dothan. 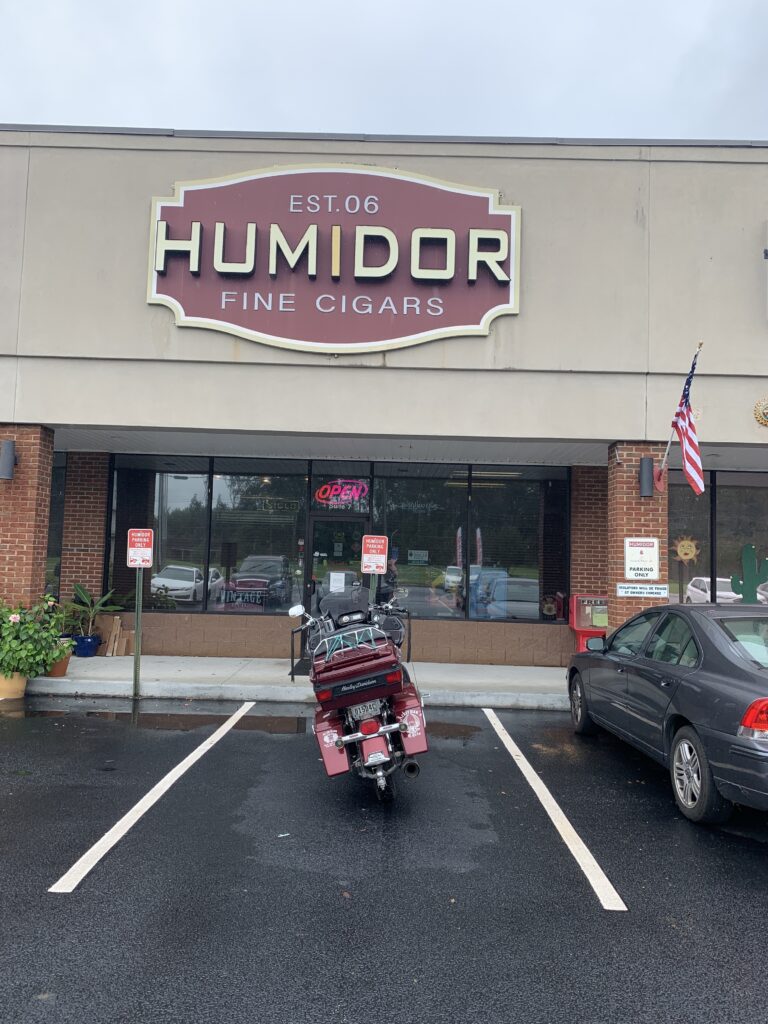 We were there for the outage at Farley Nuclear plant and while I had hoped for some place where I would be able to find cigars in this southeast corner of Alabama, I had no idea of the cigar adventures that we would encounter.

I would come to find out that there were three places that I could purchase fine premium cigars, two of which became my mainstays, one being Havana Breeze which I have already posted about and the other one is Humidor Fine Cigars.

We visited Humidor several times and I almost did the post after the first one, but I was busy working, however this turned out to be a good thing, because at the end of our time there, we found out that they were having an event hosted by Drew Estate.

This turned out to be a really awesome cigar adventure

The first time that I went to Humidor, it was a pretty big adventure in itself. When I walked in I introduced myself to Seth, who is the manager. 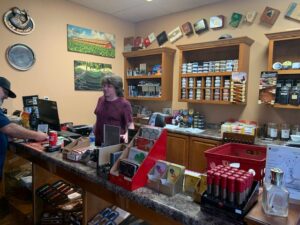 I introduced myself and told him about Cigar Pals and he seemed impressed, at the same time, I found out that Stephen Frank, who is the owner was there and he approached me and introduced himself. 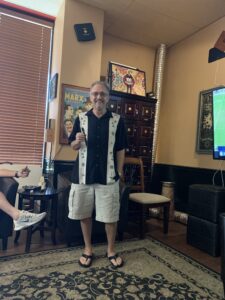 Sometimes it’s a little awkward when I first enter a place, they might think that I am trying to sell them something, but it usually smooths out pretty quick and this was no exception, soon we were chatting away like old friends about cigar, and I guess in reality we are brothers of the leaf and always have that in common.

One of the things I love about Cigar shops and Lounges is that they are all unique. Each one has it’s own look and feel. 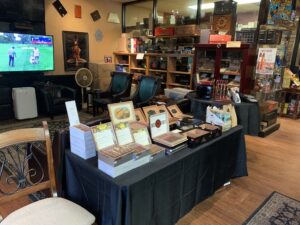 I don’t think that the building is very old, but it has an old ambiance to it, kinda nostalgic, I liked the feel of right away and the smell for those of you who spend time in such places is wonderful, the smell of tobacco permeates the place and gives it that pure essence, that grabs ya right away, making you think, yes, this is how it should be! 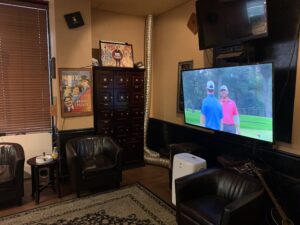 Humidor is in a strip mall, but when you walk in the door you feel like you should be in an old Victorian style house, the lounge is in the front of the store, which is unusual in itself. Also for our comfort they have several plush leather chairs and of course a two big screen TV’s. 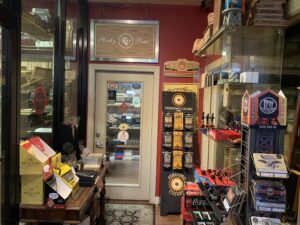 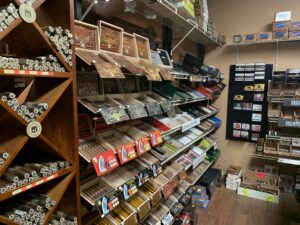 They have two nice sized humidors and a standing humidor in the lounge as well as cigars on display on a table (the whole place is humidified. 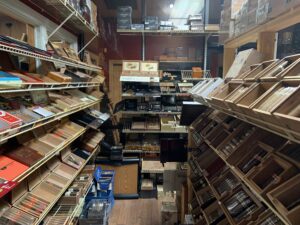 For the biggest part, the back humidor carries a lot of boutique sticks and the front one has more of the big name faces. This is in general, not the rule. The stand up humidor carries the more high end sticks like Padron and Opus. 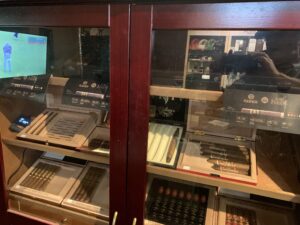 They have a very nice selection and I spent way too much every time I went in there, however they have an online members’ thing where they give huge discounts ( can’t explain it, but I know one day, I got like $65 off of my purchase)

So the first visit as I said was quite an adventure in itself. I know I tell y’all about this all the time, but as my cigar pals, I wish you to have experiences like I have, so once again I encourage you to not just rush in and grab some cigars, bur please don’t miss an adventure, stop and have a stick with the gang at your local cigar lounge!

That is exactly what I did, and we had a grand time. Got to meet some nice folks like Stephen and Seth and Mike and another guy, I think his name is Dave. 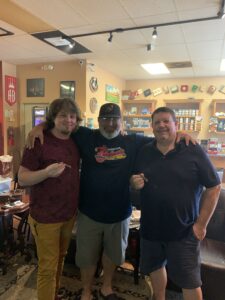 We hung out talking cigars and right away I noticed that there was a guitar in the lounge and I asked who’s it was, turns out it belonged to Seth, he plays when it’s slow and sometimes when there is a crowd. Everyone bragged on his playing!

I bet Y’all are wondering, did we play together, well no, there was just one guitar, but we took turns and gave everyone a little show.

An Event By Drew Estate

While I spent enough time in the Humidor to get a good post, I am glad that we were able to make it to their Drew Estate event just before we left Dothan.

Unfortunately because of Covid they were not able to have the rep in for the event, but it really turned out to be a good sized gathering. I also got some great deals on some Drew offerings.

They had a deal where you purchase a box of Drew Cigars (we could mix and match) and ya got a bunch of free stuff and then you could purchase a certain stick and be entered into a drawing to win some cool stuff, I didn’t win the cool stuff, but every time I entered, I got a consolation prize (a cigar) That’s a win in my book.

I got stocked up on some Liga Privada No 9, which is probably my favorite cigar by Drew and several of the various Undercrown series, which is an awesome cigar they created, because the Liga rollers were cutting into the profits. 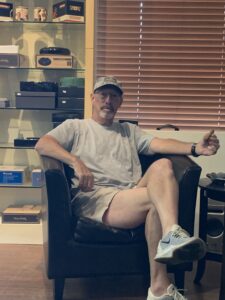 We watched some football, chatted with some new friends and smoked many cigars and a fine time was had by all. 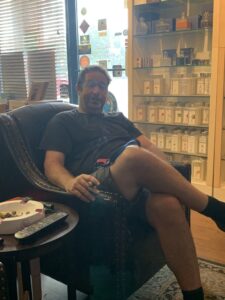 Oh yeah, Stephen got some Sushi sent in and I guess it was good (I don’t touch the stuff). 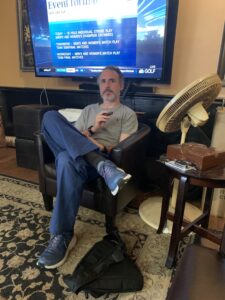 If I got any names wrong, please let me know?

There were many others there, but I didn’t get pics and unfortunately I missed the Drew Estate display (sorry)

Overall I have to say, that Alabama is a great place for cigar smokers! Up north, you have Truly Cigars, then my buddy Doug down in Montgomery at the Cigar Shoppe and three fabulous shops in Dothan.

I hope to get back to Alabama soon. There is another shop in Montgomery that everyone brags about and I promise I will check it out next time I am down there.

I have such a great time at Dougs place that I tend to just want to stay there, but I owe it to y’all to get out and check out the other shops too.

I hope you enjoyed Humidor Fine Cigars in Dothan Alabama and will check them out next time you get down that way, maybe they will even have another event by Drew Estate, or some other awesome event.

As always, feel free to drop a line with comments, suggestions or questions down below.