Wow, What an adventure! We had the priveledge of spending several hours with Sylvain of Zemis tobacco and cigars and learning about how they grow and make dominican cigars and about his personal line called “Epic Cigars” 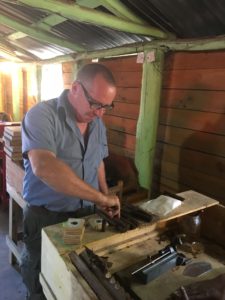 While searching for places to explore before we came to the DR (Dominican Republic), I ran across Zemis Tobacco and Cigars online. I called and talked to Sylvain, who is French and he imediately invited us to come and visit  Hacienda Cibao Viejo, just outside of Santiago de los Caballeros.

I got good vibes right away and knew this was going to be a great cigar adventure and I was right! We were there for a little over 5 hours and had an incredible time.

Sylvain is a French Philosopher and an Anthropologist turned Cigar maker. He was entertaining as well as informative. Like so many people I meet in the cigar world, Sylvain is passionate about cigars and willing to share that passion with like minded people.

In The Middle of Nowhere

We made arrangements with our driver Luis Reynoso to take us to Hacienda Cibao Viejo. Luis has all of the modern technology, including GPS and wireless hot spot, so he can be contacted on whatsapp  at anytime any where. 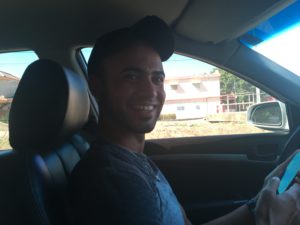 Luis got us out to the general area, however google maps tries to send you in the wrong way and because I saw someone else post a review about this, we called and also asked locals where the French man lives.

Sylvain sent someone out to guide us in!

The Hacienda is not really that far off of the main road, but The lush tropical vegitation and mountains make you feel like your in the middle of nowhere.

We turned down a rough rutted driveway that runs alongside of a splendid green tobacco field for about a quarte of a mile and turn left through a large steel gate. We then drive down a lane with plantain trees on the right and part of the botanical garden on the left. The garden wraps all the way around the house and manufacturing facilities. 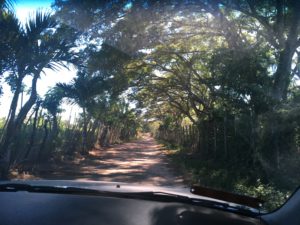 At the end of the lain you come upon the ranch style house, with a large front porch where Sylvain keeps the display humidors of the cigars that he sells to visitors. To the left of the house are the manufacturing facilities, where we were greeted by 3 dogs, workers and Sylvain. 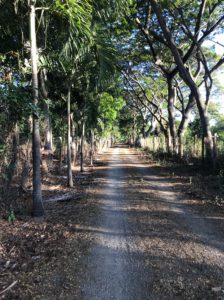 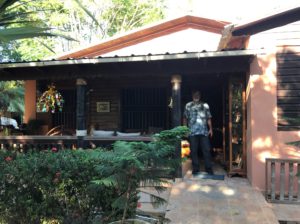 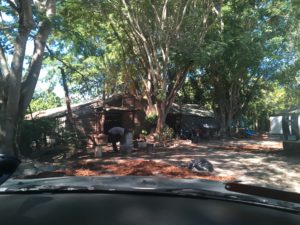 We received a warm welcome as we met our host, who of course was smoking a cigar! Through the course of the day, I couldn’t help but think about how cool it would be to have access to as many cigars as you wanted to smoke, all day long and any type you wanted. Talk about living in paradise! 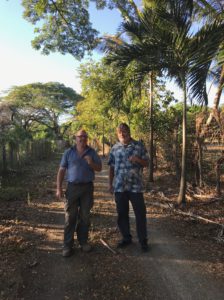 After a bit of chit chat and introductions we went in to the rolling area and Sylvain began educating us on Dominican cigars. While I like to think that I know a lot about cigars, I am constantly being reminded of how much I don’t know. I have only been smoking cigaros as they call them in the DR, they are called Puros  in Mexico for about nine years (by the way, a Puro is a cigar, where all the tobacco comes from one country)!

Like so many Americans, I really didn’t take the study of the cigar seriously and decided that I thought that I knew what I liked early on and deviated little.

Since I started this blog last May, I have constantly been in a state of education, and with this blog I endeavor to pass along that education to others.

But I digress… So we listened as Sylvain tutored us on the history of Dominican cigars and the difference between Dominican and Cuban cigars. 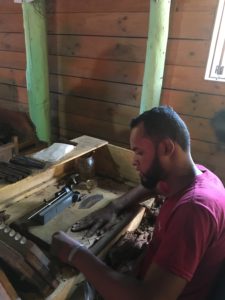 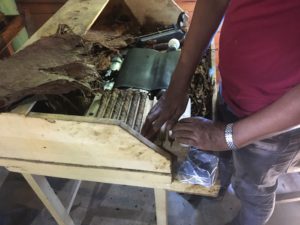 As we listened and watched as one of his rollers (Hidequel) rolled various binders, Sylvains wife came out with a tray of coffee for us. Shortly we stopped and fixed our cafe and as is common in the DR, they dont typicaly offer cream (crema), but they always offer raw suger, some times its more like brown sugar and the coffee is very strong. Very nice flavor, especially when smoking a cigar.

Sylvain went on with his explenation and after Hidequel rolled several fillers, he put them in the press. He removed some others from the press and began putting the binder and the wrapper on.

He showed us  and explained various wrappers and different ways to cap the ends. Before Hidequel put the binders in the press, he offered me one to smoke with no binder, wrapper or cap.

I have to admit, it was an interesting experience, of course the draw was loose and it didnt burn real well, but the point of the demonstration was to show that the basic make up of a cigar is concentrated in the filler.  The binder, if there is a binder, and the wrapper primarily hold the cigar together.

One of the big things they talk about in the DR is the blend. This encompasses everything from how the filler, binder and wrapper produce the flavor and how the cigar will burn. Each part has to be chosen so that they interact perfectly with each other.

This has always been a key part of premium cigar making and should alway be considered with love and passion.

The Garden was a facinating part of the tour, was almost like a maze. We walked around the right side of the house and were imediately inundated with various types of trees and foilage, both indigenous and others that Sylvain brought in. The property is unique, because they have have irrigation canals and are able to water both the botanical and tobacco fields. 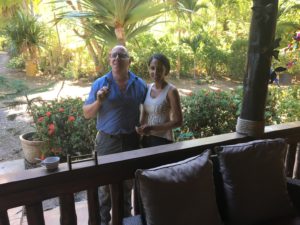 We were impressed with certain plants that we had only known as small house plant grown indoors, were towering obove us. There was a plethora of fruit trees and we had noticed a certain tree where we stayed at and couldn’t identify and he had some of them and they turned out to be passion fruit, he picked some for us and we brought them to the apartment and while they were quite tart, we  had them with our pineaple and they complemented each other nicely.

More Than Just A Cigar Maker

While talking with Sylvain, we discovered that he doesnt just grow tobacco and make cigars, he is diversified in various areas. He manufactures fine quality humidors in his wood shop as well as rolling tables and chairs.

He offered to create a line of cigars specifically for Cigar Pals with a special blend and my own band with the Cigar Pals logo on it, which we hope to taked advantage of in the spring of 2019, so stand by for the opportunity to purchase your own Cigar Pals cigars.

Things about the DR that people should know

The Dominican Republic is one of the eight hot spots of biodiversity, which means that the climate and mineral rich environment allow for animals and plants. The rich soil is not only great for tobacco, but also for pineapples, sugarcane, organic cacao (cocoa) and mangos.

There are thirty types of birds that are indigenous to the island formerly know as Hispaniola, made up of Haiti to the west and the Dominican Republic on the east end of the island. There is much to be discovered in the DR, but allas this article is about cigars. I highly recommend that if you would like to know more, just do a search on the internet.

What more is there to say 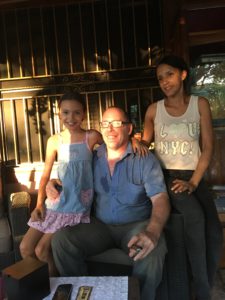 This adventure could have gone on for much longer. We sat with Sylvain on the front porch and talked and listened as he talked of things Dominican and of his philosophy on various subjects, he is a philosopher after all! We smoked Dominican cigars and chatted till after dark and probably would have gone on, but our driver came and we had to go.

We plan to come back to the DR again and will deffinately visit with our friends at Zemis Tobacco. Should any of you decide to visit the Dominican, Sylvain and Zemis Tobacco are a must visit. I provided the coordinates above, but if you get in the area and get confused, just ask for the Frenchman.

Please feel free to ask any question or make comments below!