We had the privilege of meeting John (Bayer) Miller the other day of Delgadillo Cigars.

Bayer Travels around Florida with his mobil humidor, offering cigars to enthusiasts of any genre.

When I first heard about his business, I thought, what a great idea, Cigars on wheels! 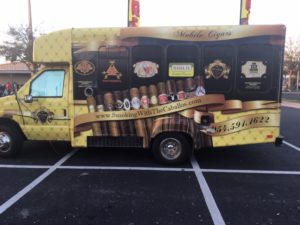 How I Found Out About Him

While in Pennsylvania at Christmas Time, I was in the Cigar Shoppe in Ellwood City having a stick with the gang and a guy named Mike Mahovlic came in.

We got to talking and I found out that he lived in Tampa and was up visiting family. In the course of our conversation, he gave me his number and invited me to contact him when we made it to Tampa.

Later during our conversation, he mentioned Bayer and his mobil humidor and promised to introduce me when we came down.

So when we finally made it to Tampa, I knew that I wanted to meet this guy and it worked out great, because when I contacted Mike when we got here, we set up to meet at Tobacco Depot.

When I arrived, it just so happened that Bayer was there having a stick. Immediately introductions were made and we started talking about when and where he would be set up, so I could see the whole operation.

As it turned out, he was going to be at the Brandon Harley dealership the following week, so we made plans to get together. 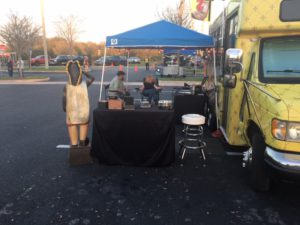 So the day finally came and we prepared to ride over.

I had been waiting for a new front tire for the bike, since there wasn’t much tread left on the old one. I considered taking the truck, but then I came to my senses and said “There is no way I’m driving a truck to a bike event!

We rode over and pulled into the lot and easily found this traveling humidor. 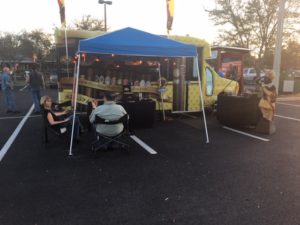 As we approached it was readily apparent that what was unique about Bayers place from others that I had heard about, was that smoking is done outside the truck in a comfortable area under an awning, complete with a cigar store Indian. 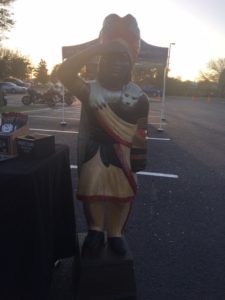 Bayer greeted us briefly coming down the steps as he was busy with customers, so we showed ourselves in and looked around while we waited for him.

Looking around inside, it was readily apparent that Bayer has quite a selection neatly displayed in such a small area.

He later informed me that he has over 100 faces in this limited space and that is why smoking is done outside. He believes it is more important to have great selection than some place for people to sit and hang out. Of course folks are welcome to sit outside and there are chairs available, but getting something to smoke is the priority.

Most people he says, purchase a stick and then wonder around the event any way.

There is quite a bit of room inside, so that people can move around each other without sucking in their guts.

There are five rows of shelve on both sides and no the back wall, as well as space at the bottom for cigar boxes and other assorted items.

You will be able to see all of this in the pics. I am impressed over how neat and well laid out it is. 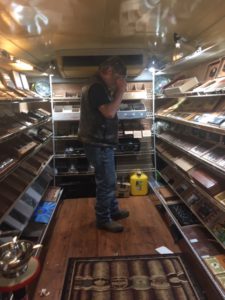 Bayer told me what he did to set the place up. He removed existing paneling from the walls and put insulation over all the windows and then installed 1″ insulation throughout, with 1′ firing strips to hold the shelves that were installed after he repanneled the back and sides.

He also installed insulation on the door. He is able to maintain that he maintains 70 degrees and 72% humidity.

A View From Outside

Outside of Bayers cigars on wheels you will find an easily identifiable paint scheme. It is pale yellow with gold Fleur De Lis throughout. A large selection of cigars laying side by side about 4′-5′ high adorn the sides. 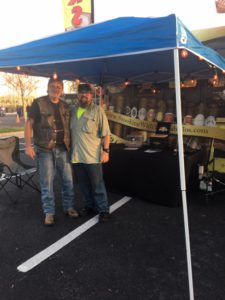 Bayer purchase this truck from a previous owner in the same business and there is writing on the sides and the front with the old companies name. 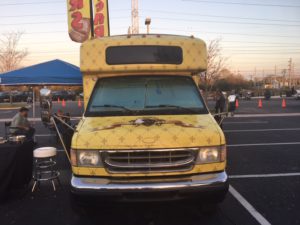 He has only had the vehicle since November and is in the process of setting up a website and will have the artwork updated when that is in place.

As I mentioned earlier, Bayer has his own cigar store Indian, (which you can see on my wooden Indian page) and a table with a cutting station. He also supports Cigars For Warriors and has cards at the cutting station.

There are nice lawn chairs and ash trays under a lighted awning.

So I talked to Bayer about how his business is progressing.

Like any business, you have to find out what your market is and then expand on it. He tells me that, so far he has done well at the smaller events particularly Golf tournaments, where he is not charged an exorbitant amount just to set up.

The big events charge as high as $12oo a weekend and that’s a lot of cigars that you hope to sell just to break even. I have seen this at some big motorcycle rallies and more and more I see them pushing out vendors who have participated in these events for years.

His sights are set higher than his Mobile Humidor, and he hope to have his own “brick and mortar” store in the not too distant future.

For now, he wonders around Central Florida filling a niche that I hope will be seen more frequently around the country.

I Think This Is An Incredible Idea

I personally think this is an incredible idea that I would love to see take hold with others across the country.

I don’t know the economics of a business like this, whether it will be profitable enough to sustain itself and thrive. I love the concept and hope that Bayer figures out how to make it profitable.

There are others who have versions of the same idea, but Bayer seems to be unique, since most are more rolling cigar lounges with limited selection.

Bayer has product, knowledge and a good business sense! I think he’s onto something!

As I said earlier, he hasn’t been into this for long and is still setting up and feeling his way.

For now, if you would like to have Bayer and his mobil humidor attend your event, or you just want to meet him and check out his cigars on wheels you can contact him at:

As always, please feel free to any comments or ask any questions below, in that place where it says comments!

Thanks for checking us out at Cigar Pals!