Hey Cigar Pals: Today we are going to review the Debonaire Habano Belicoso and there is a good possibility that this review is going to rock your world. 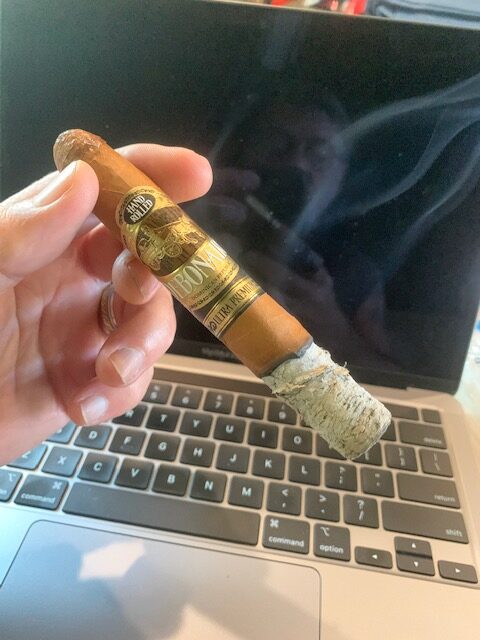 I have smoked Debonaire Cigars before and really had no doubt that I would like this stick, especially since I smoked a very tasty Maduro at the trade show, so I was anxious to check out this Habano.

A Little About Phil And Debonaire Cigars

I first met Phil at the Tinder Box in Rapid City, SD while attending the Sturgis rally two years ago and was really excited to meet him, because I knew that he blended Cattle Baron Cigar, which was owned by Bryan Mussard and immediately after the rally, I was going out to Dillon, MT to do an interview with Bryan.

So there I was meeting his blender and it was a great pleasure to meet Phil. I feel like we hit it off right away and we spent a couple hours talking that night, so I was really happy to see him at the PCA.

Unfortunately the PCA is where retailers (brick and mortar, Mom an Pop) cigar shop owners and their reps come to meet with the manufacturers. Therefore, there is very little time to shoot the breeze with those in the media (that’s how I got in, cause I’m media (no one cares that it’s social media)).

So we didn’t have a lot of time to visit, I also got to see Bryan Mussard of Cattle Baron Cigars ( OK, enough about that, I have to save some of this stuff for my PCA post).

From The Debonaire Site

Debonaire is the culmination of 20 years of research and development to produce the finest premium cigar on the market today. We incorporate the finest darkest, air cured tobacco from the most superior tobacco crops of Central America and the Dominican Republic. Our gourmet tobacco is blended to perfection with the highest attention to detail so that the rich history of the past can be savored in the present. With every luxurious Debonaire Ultra Premium Cigar you can taste the essence of a land steeped in tradition

Burn: excellent burn with a nice solid white ash that didn’t want to drop. The burn was pretty slow and stayed cool the whole time

Light Up: hay and cinnamon toast, with some black coffee

First Third: after about a half inch when it gets cooking takes on a creaminess in the coffee, still hay and cinnamon toast, and a honey flavor is developing in the background. Halfway through the first third, took on some black pepper on tongue and retro

Second Third: hay fades to the background, the cinnamon toast becomes dominant, with coffee close behind, black pepper is mild and maintaining sweet honey for a long finish

Final Third: hay remains in the background, cinnamon toast and cream coffee continue to via for first place. The pepper becomes more pronounced, but not offensive and that sweet honey finish continues to please me.

Notes: I don’t want to say that I was surprised, because I have smoked Debonaire cigars before and I always have enjoyed them. I have really enjoyed this cigar, with it’s complex notes of hay, cinnamon toast, creamed coffee, black pepper and that sweet honey on the long finish. I can strongly recommend this stick and if I was into rating cigars (which I’m not) I would easily rate this cigar 90+. The burn was excellent and the draw perfect.

If I haven’t gushed enough about the Debonaire Habano to convince y’all that you should pick one up any time you come across on, let me just say, in the words of Steve Saka: “A really good cigar is one, that you hate to see end and can’t wait to smoke the next one”.

Well Cigar Pals, I can’t wait to smoke the next Debonaire Habano. Unfortunately, I don’t have another Habano, but I do have two other Debonaire sticks that I will review in the future and anticipate them being just as good as the Habano.

As always, feel free to leave comments, questions or suggestions in the section below.