Ooops, I slid right into this awesome adventure. By stopping at a Dominican cigar bar and asking for help, a whirlwind cigar adventure began. This will take three posts to tell the whole story, Including visits to Davidoff Cigars where I met Master Blender Eladio Diaz, Profeta Cigars and Carrillo Cigars. 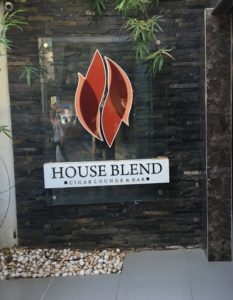 The story begins when we decided to visit House Blend cigar bar in Santiago, DR. We met Buddy who is the assistant manager, He speaks broken English and showed us around the Humidor and made some suggestions. 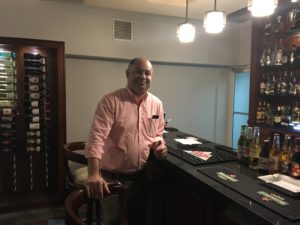 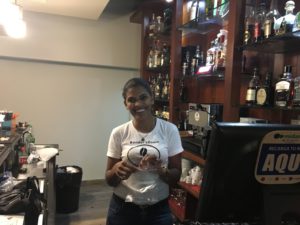 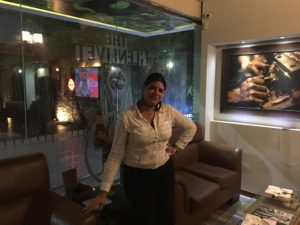 Shortly after this Buddy introduced us to Jose Alba, who immediately presented me with a cigar and informed me that this cigar was personally rolled by Eladio Diaz who I came to find out is the Master Blender for Davidoff Cigars and owns the cigar bar.

Alba “as he prefers to be called” speaks pretty good English and I talked to him about the fact that I was having a hard time connecting with the cigar companies and asked if he could help me with that. 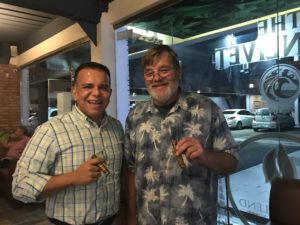 Jose Alba and me

What happened next was beyond anything that I could have imagined. He invited us to sit down with him and I explained to him what Cigar Pals is about and he started sending texts and making phone calls.

We chatted as this was going on and he explained how things work in the Dominican Republic. While we talked he received some texts and calls and then informed me that the next day I had a personal interview with Eladio Diaz. Eladio is the master blender for everything Davidoff makes and also blends for some other companies including Occidental, OK and Commacho cigars.

He also told me that we would have a private tour at Carrillo Cigars, who are a boutique cigar company based in the Dominican Republic in the lush Cebao Valley. Many of you may remember a cigar called La Gloria.

This stick was created by Ernesto P Carrillo and later the company which was called El Credito was sold to General Cigars, because the demand for it was too great for the little El Credito company after an article came out in Cigar Aficionado which itself was just a small magazine at the time, boosting cigar sales from about two hundred thousand sticks a year to over a million.`

After our visit to House Blend Cigars, we chanced to meet William Tavarez, who is the director of marketing at Profeta Cigars, in the parking lot at the grocery store ( la markeda ) where we stopped at on the way back to our AirBnB. William is a friend of Luis, our driver.

I started talking to William about what we were doing in the DR and what I do with Cigar Pals and he invited us to come and tour Profeta Cigars on Saturday.

Things happen fast in the DR as we were finding out, and this became another big part of the adventure as I will tell you about in the next Dominican post.

Eladio Diaz – The Man, The Myth, The Legend

On Friday morning I awakened with the excitement of knowing that a great adventure was in store for us on this day! 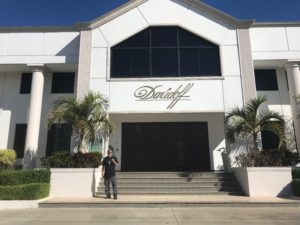 We arrived at the Davidoff Facilities and found that we indeed were on the guest list and given visitor badges and sent up to the Big House!

We walked through the front door and were asked  to take a seat. We just about got our butts in the chair when we were asked to follow a young lady up the staircase that was in front of us.

When we got up stairs we were again asked to take a seat, where we may have sat for a few minutes when were then escorted into the office of Eladio Diaz. 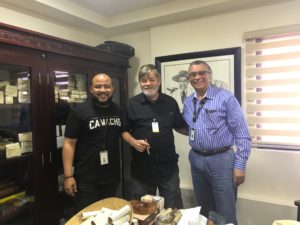 Wilbur me and Eladio

When we walked in I encountered Eladio immersed in lighting a cigar. I don’t think he realized we were there and when he looked up he was slightly surprised to see me standing there. He smiled and offered us seats.

He offered coffee and when I declined, he offered water, I also declined the water and then he asked the question that I had been waiting for…. Cigar, I smiled and said, absolutely!!! He smiled and I believe that is when we connected.

Eladio does not just hand you a cigar, he presents it with two hands in a very dignified manner. I am ashamed to say that I did not take notice of this until later when Alba asked me if he did this, and upon reflection I realized that he had done this.

Eladio has an assistant named Wilbur Zentura who he calls his son and is grooming to become the next Master Blender. Wilbur speaks good English and was our translator during the interview.

Much More To A Cigar Than Meets The Eye

I asked Eladio about what a Master Blender does and he explained that he decides what goes into each cigar line that Davidoff makes. He does not just throw some leaves together and wrap them up and say “walla theres your cigar”!

Much care and consideration is put into the creation of a fine cigar. A cigar is a work of art and consideration must be taken to ensure that not just the first cigar is exemplary, but that the tobacco is available for future runs of the cigar, maintaining the same flavor and construction year after year, which takes true knowledge and understanding because there are so many variables that can effect the tobacco plant through out the seasons.

We learned that Davidoff is the second largest producer and distributor of super premium, premium and good cigars and that Eladio is responsible for the production of all cigars. Roughly six hundred people are involved in the making of a cigar, from cultivation of the seed to the final wrapped and boxed or bundled cigar.

They create their own seed by going as long as 8 seasons germinating the seeds to create  a master plant If you will.

Eladio started in the tobacco industry at the age of 7 and has been in it for 59 years and it took him 19 years to become a Master Blender. Wilbur started at the age of 9 and while I suspect he is in his mid to late thirties, he did no tell us.

Every day, all day long Eladio and Wilbur and the supervisors smoke all , testing for consistency and feedback.

Something that I was not aware of and like most, thought that the wrapper revealed the strength of the cigar is that intensity and strength are not neccesarily the same thing. You can have a very complex cigar that might not be real strong but loaded with flavor.

The wrapper is just a wrapper and only represents about 2% of the flavor of a cigar and the binder, if there is one (there is not alway one) is another 2%, 96% of the flavor and complexity of a cigar comes from the filler, which will typically be made up of 4 different types of tobacco, but can be more than that.

Final Words From The Master

There goal at Davidoff is to create a pleasant, elegant and sophisticated experienc for your palate.

When asked what information he would like for me to pass on to my readers, he replied: taste is individual, find what you like.

I would like to share this from my own experience. Befor I started writing this blog, I thought that I knew what I liked and tended to only purchase those cigars, but since starting this, I have come to realize that there are so many cigars and so little time, I encourage you to step out of your comfort zone and try something new and different!

May I suggest Davidoff Cigars for example.

Check out the next post of my Dominican cigar adventure and feel free to ask any questions or make comments below. I will respond within 24 hours.