This morning we will be doing a cigar review of the Crux Epicure Maduro.

This is another one of Crux Cigars newly branded lines and from what I read, they announced this stick at the 2018 IPCPR show, but didn’t take it to production until they re branded in 2019. 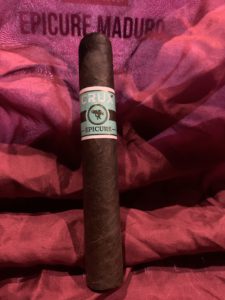 I was introduced to Crux Cigars when I attended an event at Club Humidor in San Antonio in late February.

A Little About Crux Cigars

This is what they say about the Crux Epicure Maduro on their website:

Built for the bold, the brave and the original. With colors reminiscent of a 1957 Chevy Bel-Aire, the Epicure Maduro invokes an element of Americana and nostalgia to provide old-school luxury. This is the pure embodiment of when timeless flavors collides with raw imagination, making for a vintage inspired and seriously smooth collection.

Crux started in 2014 by a guy named Jeff Haugen, who owns a cigar lounge in Maple Grove, MN. By the way, I have been to their store a few times, and I love it. (didn’t meet Jeff)

In the early years, Jeff had two of his cousins, Casey and Tony working for him.

Jeff decided that he wanted to create a cigar brand, because, being in the cigar business, he saw how it brings people together and he though it would be great to meet people all over the country who share the same passion.

He started traveling extensively throughout central America learning the ropes about cigar blending, at the same time Casey took a job in management with a non related company. ,to learn how to manage a business.

Then in 2014 they launched Crux Cigars and have done extremely well. 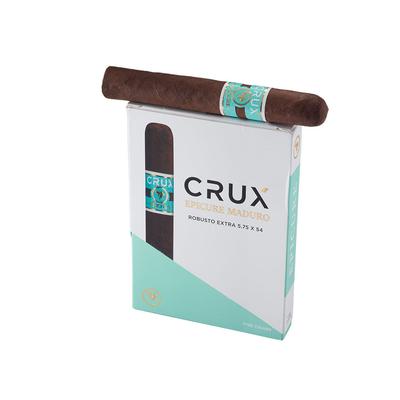 Their branding was kind of confusing, said Casey on Cigar Coops, pod cast Prime Time Episode (114), so after doing considerable market research, they re branded last year, with all new bands and packaging.

While the look has changed, Casey assures us and Sam verified that none of the blends have changed.

What’s Under The Hood Of The Epicure

Crux doesn’t give out much about their blend, but I believe this is all Nicaraguan tobacco except for their Mexican San Andres Wrapper and is manufactured by AJ Fernandez, which was the only way to get his tobacco was to let him make it.

Draw: Slight tightness at first, opened up pretty quick and was real nice throughout allowing a lot of smoke

Burn: Nice even burn, flaky ash that dropped in one inch chunks, no touch ups. I did have to relight a couple time, first time I thought it was me, but the second time in the final third, it wasn’t me.

Flavor Profile: Shot of pepper in the back of my throat on light up. The peppery spic was pretty strong until about an inch in, the chocolate and earth settled in which is probably the San Andres wrapper.

In the second third, this stick really mellowed out and became quite smooth, with all of the aforementioned flavors and I noticed that the almond that I smelled and noticed on the cold draw was starting to present itself along with a hint of coffee. At the end of the second third, started getting strong again with pepper and spice dominating.

For the final Third the pepper and spice backed off somewhat and I could once again pic up the chocolate, earth and almond. The chocolate was a sweetness on my tongue that lasted for a while after the exhale. It was interesting how this stick changed from very strong to smooth again and it did this at the end of the final third, once again smoothing out.

Notes: This was an overall good smoke, I like the complexity that existed, even though it is a full flavor cigar. What I didn’t like is the way the band peeled off and damaged the wrapper, I also didn’t like that I had to relight a couple times. Those two issues in no was detracted from the overall performance of this cigar.

For me, this is a mighty fine smoke, not for the newcomer or those who prefer a mild to medium stick, but I think this would be an excellent after dinner smoke.

The one thing that I wish, is that Crux Cigars were more widely distributed. I haven’t found them at any of the online stores yet and with the Covid 19 going on, most of the smaller shops are closed or don’t carry them yet.

If you happen to find some Crux cigars out there somewhere, do pick one up and give it a smoke, you won’t be disappointed!

**** I told y’all in my last review that I would be reviewing the Dondurma, by Steve Saka next, however, I missed the fact that they were not receiving them until yesterday and I won’t get mine until probably tomorrow.

I will review it as soon as I receive them.

By The Way, They are sold out!

As always, please leave comments, suggestions or questions in the space below.