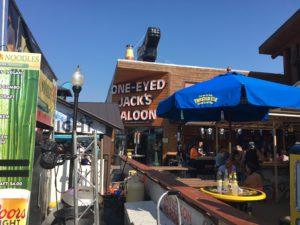 Here I am at the 2018 Sturgis Motorcycle Rally in the City of Sturgis, SD.

In this post, I am going to tell you about the various cigar adventures I have had during this years rally.

I arrived early so there was not a whole lot going on but whereever I go I am usually smoking a cigar or have one clenched between my teeth so I thought that I would share a couple of videos of some of the many common occurrences that you may come across while at the rally.

Shortly after arriving my friend of many years at the Sturgis rally Stella,  invited me to take a ride in her Can Am side by side. So we drove over to the entrance to Camp 5 which is a free camping area in the Black Hills National Forest.

You will see these 4 wheelers all over the place out here and they are allowed on the highway, so ya have to be careful not to run them over.

Many of my friends stay here during the rally, however, there are no amenities other that there might be a porta John, depending on the year. They do a lot of tent camping as well as RV and you will find many 4 wheelers there along with trails that go on forever.

Every year, I stay with some friend of mine who open their ranch to us for the 10 days of the rally and this is where many cigars are smoked and lies told.  Cigar Pals of mine come from all over the country and quite often I am introduced to cigars that I am unfamiliar with and stories of cigar adventures that others have had are recounted.

We spend many hours around the firepit, beginning early in the morning till late at night.

Here are a few of my Pals at the camp, you can find many of them under the Pals page on this site. 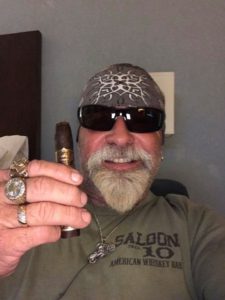 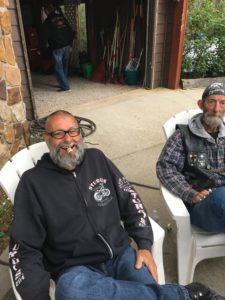 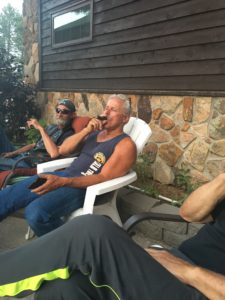 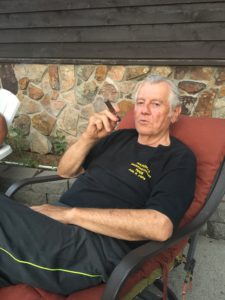 Every year, I go into the City of Sturgis to enjoy the festivities and no trip would be complete if I didn’t stop at the Humidor at One Eyed Jacks.  They are kind of unique in that they have the cigar girls walking around the huge bar area selling cigars with the old trays with the strap (see pics) and they will cut and light them for you.

The Humidor is not a large one, but it is well stocked with the more popular names and always appears to do a good bit of business.

They always have a friendly, pretty girl behind the register and this year was no exception – that brunette’s name is Jami. 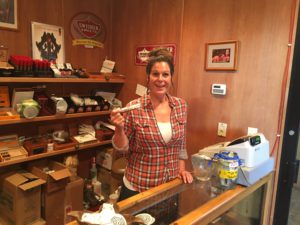 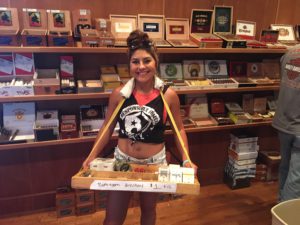 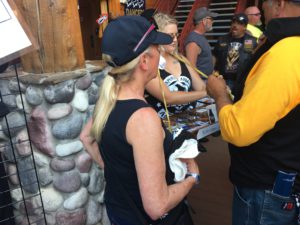 As for One Eyed Jacks, well you just don’t know what you might see there. When I was on my way up to the Humidor, there was a girl dancing on the bar (I won’t tell you what she was wearing) in the middle of the afternoon (sorry I didn’t get any pics).

I went by the Drew Estates booth and was very disappointed!  In previous years they have put on a big display, usually with the Kouba Kouba stick, and usually have a lot of pretty girls all over the rally making a big deal, however this year they only put out the cigarillo display in one place, and it was not very appealing.

I had to show them my driver’s license to get in, and they were just some young people who weren’t very enthusiastic. Even in Deadwood, which I will get to in a minute, they were not up to their usual standard. Overall I was very disappointed!

I was hoping for a much bigger adventure this year! 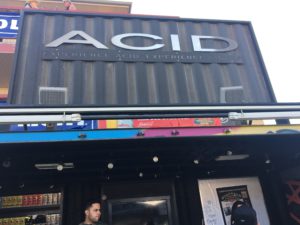 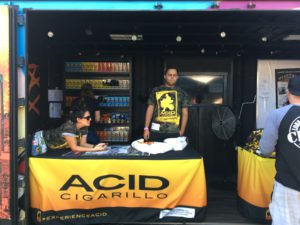 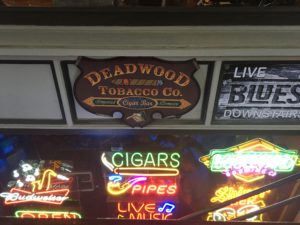 My next stop was the Deadwood Tobacco Company and Cigar Bar.  Even though Deadwood is 14 miles from Sturgis, it is still a big part of the Sturgis rally scene. Just about anyone who attends the rally will end up in Deadwood at some point. 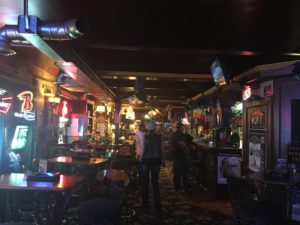 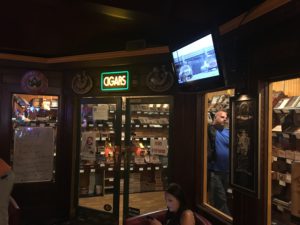 I found this on  their web site: Our building is 110 years old, with Chinese tunnels, and a glass sidewalk to light them.  We also have the original Deadwood jail (the only jail that serves beer!). Our basement was originally a barber shop and Turkish bath.  The back stairway led to the 2nd floor of the entire block where the whore houses were located (they called them cat houses here) so guys would go in the front for a haircut and sneak up the back way and get taken care of. We’ll do our best to take care of you (though don’t be looking for any special favors like that!)

I typically drop in there a few times during every rally, this being my 10th in a row.  Drew Estates always makes a big production for the company and this year was no exception. Drew always has a huge variety of their cigars there with company reps in the humidor at all times to answer questions and make recommendations.

This is where I was first introduced to the Liga Privada #9 which is one of my favorite sticks, however not one that I can afford to smoke on a regular basis.

There are other towns like Hill City, Rapid City, and Custer.  During the Sturgis rally there are events going on all over the Black Hills. The city of Sturgis is just a small part of the overall festivities.

I may as well tell you a little about some of the things that go on out there, because cigars are just a small part of the overall adventure. ou can rest assured that wherever I go on my bike during the rally, there will more than likely be a cigar clenched in my teeth and since I am usually the road captain (the guy in front) with the group I ride with someone behind me will tell me that they could smell my cigar while riding down the road.

The real beauty of the Sturgis rally are the rides!  There are hundreds of miles of roads that twist through the Black Hills and scenery that will take your breath away.  I strongly encourage anyone who rides a motorcycle, or even if you don’t, to visit the Black Hills.

There’s all kinds of souvenir shopping and activities for the family. The rough, tough, scary biker scene is no longer prevalent anymore and the people who run the rally work to make it a family fun vacation spot as the stereotypical biker no longer rules the streets. 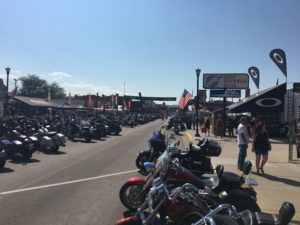 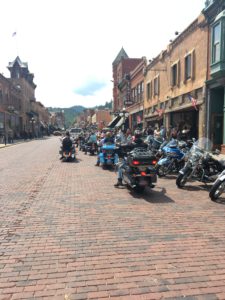 They still exist and attend, and you will see colors (MC club patches) being worn, but there is a real strong police presence to keep them under control these days.

The native Americans knew that it is a spiritual place, and I am totally convinced that it is Big Medicine. I can’t begin to explain it to you, it’s just something that you have to experience for yourself.

Overall the rally was a huge success!  I only heard of 4 deaths, which is down from 8 last year.  The attendance numbers were up to over a half million people (can’t find an accurate number, sorry).

As for cigars, well I was a little disappointed.  I expected more due to my past experiences there, but I still had a great time and got to smoke some good sticks with my Cigar Pals.

One of the things that can be a turnoff at the City of Sturgis rally is that South Dakota imposes up to a 35% tax on tobacco not purchased in the state, which means we have to pay more for our stogies out there.