I recently dropped by Foggies Liquor in Sioux Falls, SD and had the pleasure of meeting Scot and Traci Harvie and in the course of visiting with them, Scot gave me a CAO Orellana which is the latest in the Amazon series by CAO.

Scot told me that he had gotten it at the 2019 ICPCR trade show and thought that I might like to review it.

So here it is and I think you will be surprised by my review!

BTW, I am now just south of Chicago at a place called The Tobacco House in Bradley Illinois and they have two boxes of these lovely sticks and I have purchase 4 of them in the last two days.

The name Orellana is named after the Spanish Explorer, Francisco De Orellana, who was the first to navigate the Amazon River between 1539 and 1542.

The Amazon Basin incorporated a wrapper made from Brazilian Braganca tobacco, and then came the Fuma Em Corda, which had a leaf called by the cigar name, fuma em corda.

Now with the Orellana, they have included both of those leaves in the filler and a new leaf called the Brazilian Cubra as wrapper. 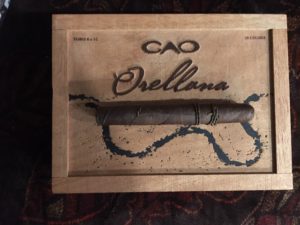 What’s in The Orellana

Started off a little Peppery, but smoothed out quickly.

This stick is very earthy, with hints of cocoa and cinnamon, what I was most impressed with was the finish which was consitantly sweet, almost fruity.

The flavor was smooth throughout almost creamy.

The draw was excellent and the burn purfect

Very slow burn (about an hour and a half, which is pretty long for a toro)

This is a most enjoyable stick, That I wish I could afford every day.

I put it in the same league as the Sin Compromiso,by Steve Saka which has been the best cigar I have smoked this year.

I wouldn’t say this is as good or better, but for the money and the smoking experience, I have to say that it is better than many more expensive cigars that I have smoked.

I can’t say this about a lot of cigars out there, but just like the Sin Compromiso, when you smoke an Orellana, it is an experience you can savor and just enjoy.

Do you think I am impressed?

I love it and plan on doing something that I rarely do with cigars in this price range, I’m ordering a box of the CAO Orellana.

These are probably going to be short-lived, like the rest of the Amazon series, due to the limited availability of the tobacco, so I recommend you pick some up while you can.

Feel free to leave comments or questions in the section below and by all means drop me a line and let me know what you think when you try one.

Smoke em if ya got em!