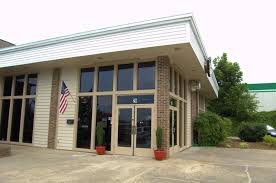 Today I had an unexpected surprise when I decided to revisit Outman’s Cigar and Martini Bar at 26 Orchard Park Dr., Greenville, SC 29615, where I was introduced to a new stick from CAO Cigars and a unique group of people and found out about cigar therapy.

Outmans is the only Rocky Patel Lounge in South Carolina.

So I decided to revisit Outman’s , however I had my reservations because the last time I was in there I got run out…

OK, I wasn’t really run out but what happened was, it was a hot day and I decided to check this place out. I went in and introduced myself as some one of great importance not really, but I did tell them that I am a blogger and was looking for places to write about.

I was led into the humidor where I met Kevin who assisted me in finding some nice cigars, and they do have an impressive selection! We exited the humidor and was checked out, and I told him that I was going to the bar to order some cool refreshment when he told me that I couldn’t stay because my shirt didn’t have any sleeves.

Now I didn’t have a problem with them having a dress code, but I did take exception to the fact that he let me purchase about $40 in cigars before that information was disseminated!

So, with a bit of trepidation I returned to Outman’s, with sleeves I might add! I was wearing my “That’s What I Do, I Smoke Cigars, And I Know Things” t-shirt.

I went in, and guess who was there to greet me? That’s right, Kevin, the kid who bounced me the first time! I said “Do you remember me?” and he said “Yes”. I then asked him if I could smoke in the bar this time and he said sure, cause I had sleeves.

Standing just a few feet away was Chris Tsangarides the owner of Outman’s. I introduced myself to him and told him what I was doing and the story about the first time I was there. Chris told me that sleeveless shirts are one of his pet peaves, but he did agree that I should have been told before I purchased cigars. 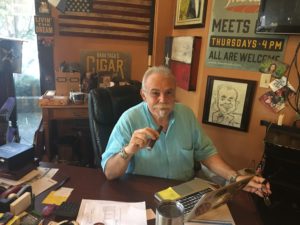 Chris and I talked for a good while about the cigar industry and the new federal regulations. I guess they have to be really careful now because big brother is always watching.

After a while I went to the humidor to find something good to smoke, and he went back to work. 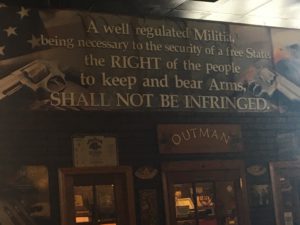 Kevin assisted me, and he put me on a very nice stick by CAO Cigars called the Fuma Em Corda. The Fuma Em Corda is the second in CAO’s Amazon Basin series.

The Fuma Em Corda is bound by tightly wound ropes and left to ferment, a technique native to the tobacco farmers of Brazil. The Braganca tobacco inside undergoes a different process — compressed and fermented for six months into tightly wound tubes. Add a Honduran Oscuro wrapper and Cameroon binder and you’ll find a woody flavor, with spiciness and an incredibly long finish. 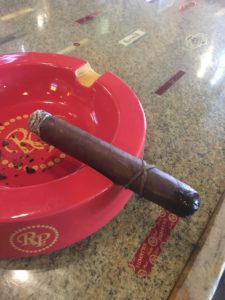 The draw on this cigar was a little tighter than I would have liked, but I caught that woody flavor immediately, which was quite prominent at first but as I smoked the boldness dissipated some, however it was there the whole way through.

One of the interesting things about this stick is that in place of a band, it has a ring of twisted tobacco leaf wrapped around it One of the guys I was smoking with called it a point of no return ring. The cool thing is that you can just smoke right through it.

You can read about it at: https://www.cigaraficionado.com/article/cao-fuma-em-corda-ventures-into-the-amazon-19435

Could This Be an Adventure

I was sitting there enjoying my cigar and making notes trying to see if I could find enough information to get a full post, or if they would just end up in my “Places Along the Way” page, and had pretty much decided that I just didn’t have enough.

I had been watching as this large assemblage of tables in the middle of the room was filling up and meant to ask someone about that.

I got up and went to thank Chris for his time and pay my complements. I mentioned that I just didn’t think I had enough for a story at this time and he said, Wait a minute and walked over and moved his TV to reveal a sign that read “Cigar Therapy, meets here Thursdays at 4 PM”. (uh-oh, could this be a Cigar Adventure?) 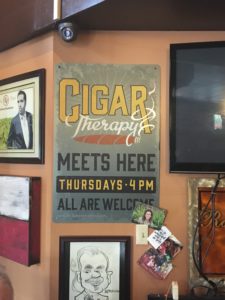 He then proceeds to call over this guy named Phil, and introduces us. Turns out that Phil and I come from the same neck of the woods in Pennsylvania and tells me about Cigar Therapy. 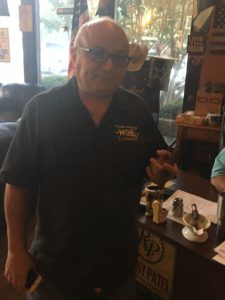 These guys have been meeting every Thursday since May, 2008. They met at two other venues before landing here. 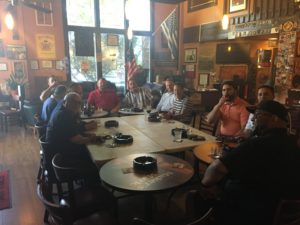 The table is open to all and Phil invited me to join them and sat me beside a guy named Brent who had brought two guests, Fey and Rod, who are from the Dominican Republic and are up here for a wedding. Phil thought that I would enjoy meeting them and was right. I am thinking that Y’all might be seeing a story about my trip to the Dominican before the years out. 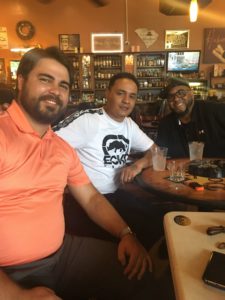 We all sat around chatting and smoking. Of course most had alcoholic beverages they were partaking of.  From what Barry, who sat to my right tells me, these guys are big movie buffs and they spend a lot of time dissecting various movies. 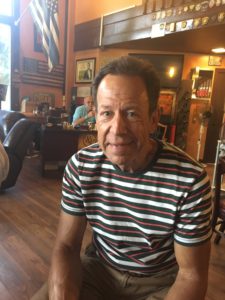 At 5:00, Phill gets everyone’s attention and mentions the Question! Apparently Phil texts or emails them all with a question for everyone to ponder and discuss at the Therapy session.

Today’s question was: If you could have any celebrity endorse any product, who and what would it be?

Then we go around the table and everyone introduces themselves by their first name and tells what they are smoking and drinking and then answers the question. Some of the answers were quite creative and I could tell that these guys have been playing this game for quite a while.

Several of these guys were smoking CAO Cigars on Brent’s recommendation.

After this Phil, has Brent present his visitors with this coin and Phil presents one to me. There is a secret hand shake used to present this coin (ok, it’s probably not a secret). 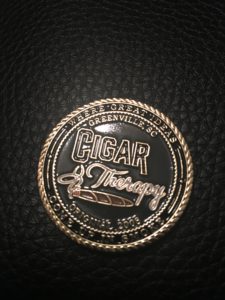 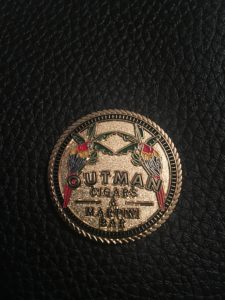 These guys were a lot of fun and really welcoming. They asked questions about me and my blog and treated me like one of their own.

So, What Did We Learn-Or Relearn

Once again, I came close to leaving and out running my adventure.

By the way, they have a fully stocked bar with a lot of top shelf liquor, and you can meet Anna the bartender. 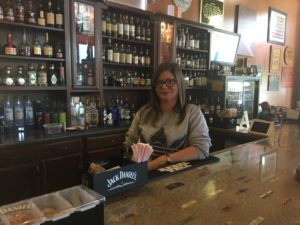 I highly recommend Outman’s (just make sure you have sleeves, and Chris doesn’t care for ball caps turned backwards either). They have a great selection of premium cigars. I particularly endorse the Fuma Em Corda, by CAO Cigars.

Try to stop in on Thursday at 4:00 PM, and getcha some Cigar Therapy! Don’t forget to tell ’em Chuck from Cigar Pals sent you.