Hi Cigar Pals: the other day, I stopped by West End Cigars in Conway, AK to visit and pick up some cigars and got talking with John, who was not there the first time I dropped by.

I was thinking that, most of the cigars I review are Medium to Full and many of you don’t smoke cigars that are that strong, so I figured I would try to start reviewing sticks in the milder arena to better represent all my cigar pals.

Camacho has been around for a very long time and I will give you some resources to check out their unique history!

A Little History Of Camacho Cigars

Founded in 1961 by Simon Camacho, the brand that carries his namesake has roots in Cuba, Nicaragua as well as Florida. Having bravely overcome exile, Camacho brought the famous Corojo Cuban seed, which it excels at growing.

Today, Camacho is proudly part of the Davidoff family and offers authentic Cuban flavors with its premium yet affordable cigars. Each cigar is made with Camacho’s celebrated power band bunching technique,

For My Biker Friends

Bold, convention defying and rebellious, Camacho gives off an image that caters to virile bikers and tattooed rogues. However, its refined and flavorsome smokes aren’t exclusive to them!

Harley Davidsons, workbenches and outdoor tools are all elements that embody Camacho’s brand identity. Although the biker theme is nothing new, it’s both a philosophy and aesthetic that suits the brand perfectly.

As for their logo, it can either be the brand name presented as a stencil or with a metallic finish. However, they may also opt to use their scorpion emblem to go with the desert and sunset vibes.

Furthermore, in terms of flavor and quality, Camacho ensures that their cigars remain consistent along a particular theme. With “live loud” being the brand’s motto, it’s unsurprising that these are always perfectly constructed and powerful cigars with robust and full-bodied flavors.

(The above quotes are from Bespoke Unit)

What Davidoff Says About The Camacho Connecticut

The Camacho Connecticut is the perfect smoke for those craving something “milder-mannered”, but don’t want to sacrifice flavor. This is boldness meets balance. All the rich, deep flavor and spicy kick you’d expect from Camacho, without the knock-down power. If the name of the game is big flavor and smooth enjoyment, then the Camacho Connecticut’s got you covered. 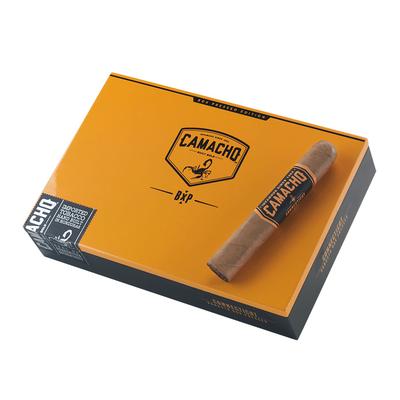 Cold Draw: Oak and almond, hint of something sweet

Burn: Nice and even all the way through, the ash dropped in 1″ chunks

Light Up: Smooth oak and almond, slight pepper on retro hale and spice in back of throat

Second Third: Oak is still there, but not dominant. The Sweetness is really coming on strong, very heavy sweet cream, almond and milk chocolate, slight pepper on the retro hale. Very long finish, all the way to the next draw.

:Final Third: Took on a cedar flavor with the cream still present, but not as pronounced. The cigar became a little soft and warm to the touch. still, a long finish

Notes: Overall, I am very impressed with this cigar. I don’t think I have ever seen this much complexity in a Connecticut and especially not in a mild to medium cigar.

Let’s Wrap It Up

So this has been an interesting adventure, I have been totally surprised and am looking forward to my next Camacho Connecticut BXP.

Steve Saka says that a good cigar is one that you hate to see end and can’t wait to smoke the next on and that is what I find with this unique stick.

I love doing cigar reviews and especially when a cigar surprises me like this one has.

On a side not and speaking of Steve, A while back I told you that I had managed to procure some of Steve Saka’s Dondurma cigars, which he only made 1000 of and doesn’t plan to make anymore.

After more than a month of waiting for these cigars to originally travel 50 miles, I have finally received them and will be doing a review of them.

I have to put them in the humidor for a while, since there is no telling what shape they are in, but after I do the review, I will be doing a contest and the lucky winner will receive two of these rare sticks, so check back often for updates as to when that will be happening.

As always feel free to ask question, make comments or suggestions in the section below.