IToday we will be visiting the Cigar Shoppe in Ellwood City, Pennsylvania and discover the best premium cigars. 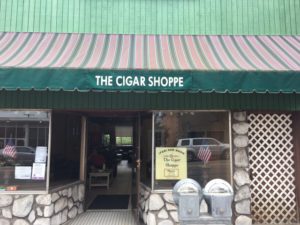 Three guys by the name of Steve Busby, Tom Plunkard and Rick Yonlisky decided that it was time there was a cigar store/lounge in Ellwood City, so they created the Cigar Shoppe. They decided to start small with low overhead and gradually build. Steve says this is his brain child and I really like his business model.
Update: Since this video was originally posted, Steve has left the Cigar
Shoppe, for other ventures.
Most of the big names in the industry require a shop to purchase high volume and if you can’t move the product you will be terminated! (Probably not an accurate phrase, but I think it sounds cool) Of course they think they have the best premium cigars and can make these types of demands, but the little guys just can’t reasonably buy in to that market.
Update: Since back then they have really filled out their shelves and are carrying some of the more popular faces, like Southern Draw, Villiger, Perdomo, Alec Bradley, Kristoff, Cohiba (no not the Cubans), Camacho, My Father, to name a few
So what Steve, Tom and Rick decided to do was instead of buying into the big markets, they instead chose to sell quality cigars that have not achieved the popularity of the big guys, however they deliver a quality stick.

I grew up in Ellwood and it still has that home town feel about it that I remember from my youth. When you pull up to the shop at 707 Lawrence ave, Ellwood City, Pa. you will see on the awning above the door “The Cigar Shoppe”. Ellwood still has parking meters, so don’t forget to drop a quarter in the slot (unless its after 3:00 pm)!

When you walk in the door you are in the lounge and will probably run in to Steve, as he is usually the one minding the store. 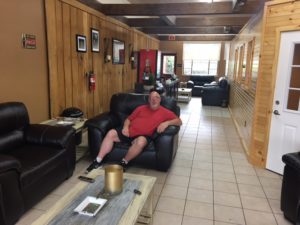 Steve is from Jersey, but don’t hold that against him! Steve is very personable and extremely knowledgeable about cigars, especially brands that many of us have not heard of but have been missing out on.

When you first walk into the humidor, don’t expect the walls to be lined with boxes upon boxes of cigars. As I said they are starting slow and working up. They have traded quantity for quality.

Note! As I said above, they have really filled the place out and have plenty of sticks for your Smoking passion! 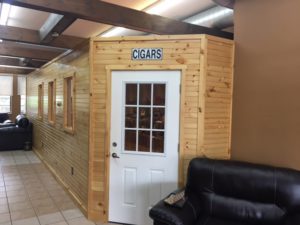 While they don’t carry much in the way of the big names, they do carry some Macanudo, Punch and Brick House, which I consider if not the best premium cigars around for the money, a definite contender

I first went into the shop about 3 weeks ago and have been going back 2 – 3 times a week and have yet to smoke a cigar I didn’t enjoy. Steve introduced me to names like: Ohana, mBombay, Yayabo (don’t ask me how to pronounce it) and Southern Draw.

Some of you may be familiar with these brands, however I was not, because like so many of us, I had had become a victim of my own prejudices and think I know what I like and don’t experiment by trying something new.

Last year while traveling through Old Mexico on my Harley, I was about out of cigars and calling what I was smoking Cigars was really a stretch. I had done an internet search for cigars in Mexico and discovered a place called San Andres! I would come to find out that they grew some of the best tobacco around and export all over the world.

Not to get too far off track, but I found the place where I could get some cigars and when I went in, it was like a bank, they even had armed guards. More about this in a future blog. The moral of the story is “I found some great cigars from a place I had never heard of!

So take a chance and try something different!

Where are they going with this

Steve tells me  that they plan to be fully stocked by the end of the summer. They are still waiting on inventory that is back ordered and have some overhead from the opening that they want to take care of before they line the shelves.

Steve talks a lot about the big picture and foresees this as a long term venture, so he is happy to keep the lights on and the doors open and product on the shelf.

He believes that they will have the lions share of the cigar business in this area in a couple of years and has people coming from “down in the valley” as we say in this neck of the woods and even folks coming from as far away as Pittsburgh.

Slow and steady, said the tortoise to the hare!

What I enjoy about the place

what I find so enjoyable about The Cigar Shoppe is that like the city they have chosen to set up shop in, it has that warm home town feel. This is a place where you can go in, pick you out a cigar and sit down in comfortable wide leather chairs in a relaxed environment and just visit with your neighbors a while.

Like so many other shops I have been in, it’s nice to just sit and jaw a while, and of course no matter what lies, I mean stories are being told, the conversation always comes back to cigars! In the world of cigar enthusiasts that is our passion and there is always more to say on the topic. 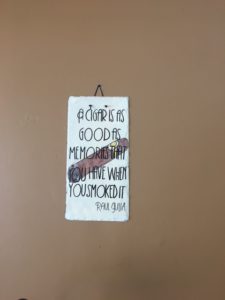 I recently asked Steve what he thinks is the best premium cigar. With out much thought he told me he believes that would be the Daddy Mac, by Cornelius & Anthony

There are so many great sticks out there that it’s hard for me to declare a best premium cigar, but he gave me a Daddy Mack and it was a very nice medium cigar, so I will definitely have to agree that it should be on the list.

One other thing about the Cigar Shoppe is that while they don’t sell alcohol, you are more than welcome to bring your own bottle (byob).

Steve also told me that they have events coming up such as the beer exchange next month, where you bring a case of the beer that you enjoy and everyone swaps out two bottles a piece and everyone ends up with a case of mixed beer to take home (minus what ever you drink while there)

Update: Site the time of this post, they have had several event, including the rolling event that I had the privilege of attending, featuring Don Gonzalez, cigars, which is where I purchased that funny looking pipe cigar, that I did a video of.

So there you have it

If you’re heading into western Pa or live in the area and are looking for some of the best premium cigars I highly recommend stopping in and expanding your cigar horizons!

As always, feel free to leave comments in the section below.

Don’t forget to tell em Chuck sent you and you found out about them through this blog at Cigar Pals!

I recently had the opportunity to stop back in and visit the Cigar Shoppe and found they had made some changes.

Unfortunately, Steve has moved on to other ventures and I’m sure his knowledge and expertise will be missed. However there are some new faces and I am sure you will enjoy meeting them. Their names are Dave and Ron, be sure to say hi for me when you drop in. Ron keeps his guitar in the humidor (great place for one) and you might talk him into playing a song. 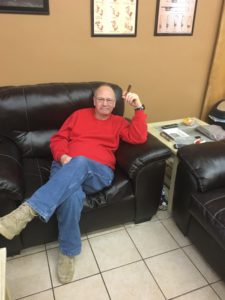 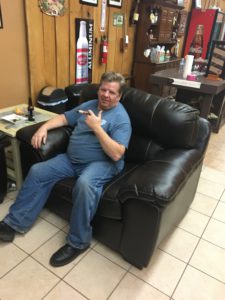 Also, the Cigar Shoppe is growing and they have a much larger inventory of cigars in stock…..you can even purchase a Cigar Pals Cigar, if you so desire!