Sorry this has taken so long to post, but I have been having problems with my bike and even on the way back from this event I had to use the chain from my wallet to hold my tail pipe up to get back to the trailer.

Then came the Road to Sturgis and other Cigar Adventures that I will be posting.

Thomas felt bad about not returning my phone call and I ended up with a ticket to the Barn Smoker outside of Lancaster Pa.

Well about a day later, I realized that my exhaust pipe was cracked in several places and in need of dire repair. I really wanted to ride the bike to the Barn Smoker because:

Cigar Pals is a guy who rides around the country on a motorcycle having cigar adventures and then writing about them! 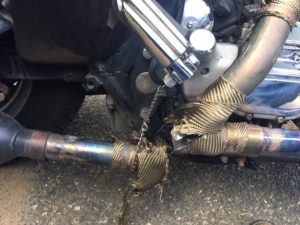 Chain from my wallet holding exhaust on!

I have no doubt that everyone heard me when I rolled up to the event, and as I said, I had to hold the exhaust on with the chain from my wallet to get home!

I arrived at the Barn Smoker on probably the hottest day Pennsylvania saw all summer, over a hundred degrees and humidity through the roof (nothings too much for my readers).

Rode off the road through the weeds and then around all the cars and made myself a nice parking spot right up front. 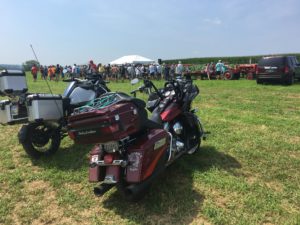 I checked in and they gave me a big bag of goodies. I had to pay $10 to get my cigars, but I suspect that was due to federal law, which doesn’t allow them to give away tobacco products.

Next I went down and met with Ben Green of Lancaster Leaf who told me a bit about the company and how the tobacco is grown. He suggested that I go and watch the workshops which would explain a lot about how they grow tobacco in Pennsylvania.

I went up and watched as they showed us how they actually harvest the plants, which was interesting in that, unlike in places like the DR and Nicaragua and Honduras where they harvest the leaves individually over several weeks, in The US they harvest the whole plant at one time and hang it.

Next I saw Jonathan Drew telling us how important it is to handle the tobacco in a certain way so they can duplicate the flavor repeatedly.

Something as simple as where the plants are hung in the drying barn can change the whole complexity of the tobacco.

Another workshop I attended was done by Willy Herrera who is the Master Blender at Drew and he told us all about how they blend the tobacco at Drew Estates to create some incredible cigars. 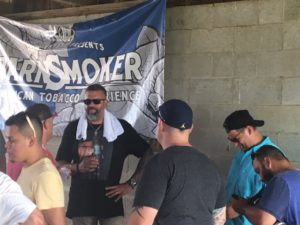 I actually got to meet and visit with Willy for a few moments!

While wandering around I ran into Rick Neas of Cigars For Warriors, who told me a bit about their organization and all the proceeds from the Barn Smokers went to them. 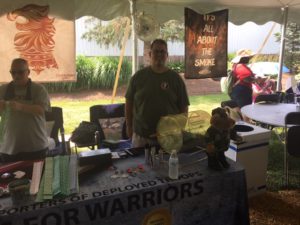 Rick Neas from Cigars For Warriors

Rick told me that no one draws a salary, the only money that doesn’t go directly to cigars for the troops is the small amount that is spent for banners and pamphlets used at the events that they attend.

He also told me that they were named the most transparent 501c nonprofit of the year, by some group who does things like that (I forget who they were)

One of the big problems that they are running into, is the new rules put out by the FDA that prohibit cigar retailers from giving away free cigars and due to the vagueness of the rules, in some cases this can actually be a criminal offense!

Since this is where CFW (Cigars for Warriors) receives most of the cigars from, they are struggling to fulfill requests by the troops.

Met The CEO for Lancaster Leaf

Ben Green also introduced me to Friedrich “Fritz” Bossert who is the CEO of Lancaster Leaf Tobacco Company, the largest tobacco broker in the world. 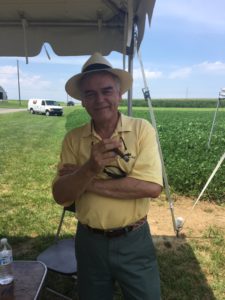 This is the definitive proof of something that I have long talked about on this blog: Cigars are the great leveler, where a plumber can enjoy a cigar with a fortune 500 executive, or in this case a valve guy/blogger with a CEO!

By the way, he gave me the cigar that I was smoking!

Ran Into a Nuclear Bud

Shortly after arriving I ran into Ben Carlin who I know from the Nuclear Power world, we have often talked cigars while on outages together. 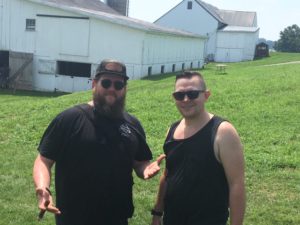 Ben was with a friend of his name of Nate, who I believe manages Davidon Cigars in Fredrick, MD

I met a guy named Joe Lynch at Sturgis who is also from Maryland and a cigar smoker, so I hope to get out there in the not too distant future and have a couple cigar adventures.

Some other things that were happening at the Barn Smoker were:

I met The guys guys with “Live From The Lounge” which is an online podcast by a group of guys out of Harrisburg, PA. Who sit around smoking cigars, enjoying their beverage of choice and discussing the events of the day, or whatever comes up. 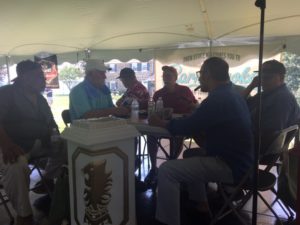 Live From The Lounge

You can catch them on ITunes and Iheart to name two!

I also met a fellow named Aaron Aiken from Black Lion Luxuries and visited with him for a bit!

The temperature was over 100 degrees and I saw two guys wearing these hats. I asked if they were hot and he said he was, but he had to stay in character. 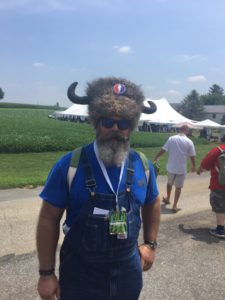 I could probably write a bit more about the Barn Smoker – With Drew Estates and Lancaster Leaf Tobacco Company, but I am behind on my posts and need to be moving on.

I hope you enjoyed the post and as always feel free to comment and ask questions below.

I really love it when you do this and so does Google!