I am sitting here smoking a Pistoff Kristoff, Hecho A Mano Dominicana as I write up my post on the Arturo Fuente Opus X Lost City and thinking…. What’s the Hype? 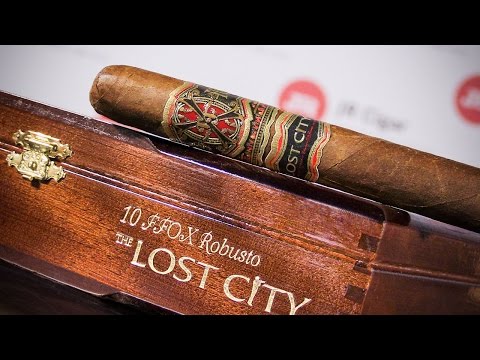 I’m not saying that the Kristoff is as good or better than the Lost City, but I can’t say that the Opus is $20+ better!

The Back Story About This Cigar

In 2004 Andy Garcia was making a movie called “Lost City” and wanted to shoot some scenes at Chateau De la Fuente and wanted a field of tobacco in one of the scenes.

The Tobacco harvest is in March in the DR (Dominican Republic) so there would not have been any tobacco growing for him to film.

Garcia was in the fields at the Chateau in early 2004 and while speaking with Carlito Fuente he said, it is too bad that you are getting ready to harvest, because this would be a great location for the scene.

Carlito said that after the harvest, he would plant a few acres that would be about 3′ tall in July, when he wanted to shoot the scene and that is what he did and they shot the scene.

Carlito then went on to harvest the crop and he let it age for five years then used the very limited supply of tobacco to create the Fuente Fuente Opus X Lost City.

This cigar is very rare and highly sought after and somehow, I came into possession of one. I know how I got it, but am not sure how it arrived at the location where I purchased it.

I am glad that I was able to purchase one, just for the experience and to once again reinforce an opinion of mine!

I haven’t smoked a lot of expensive cigars, but the ones I have smoked with just a few exceptions have not impressed me!

Not that they weren’t good cigars, and every one of them drew perfect and had a very nice burn to them. Where I run into a problem is with the flavor.

I personally would expect an expensive cigar to have some complexity to it. I would think that I would receive a mouth full of tasty nuances that would excite me and have me waiting for the next draw.

Steve Saka told me, and I am probably paraphrasing, but basically he said that to him a good cigar should be one that you hate to see end and want to light another one up immediately after that one is done.

That’s the way I feel about it and the Lost City did not have that effect me. To tell the truth, I really couldn’t wait to be done with it.

Most of what I see with rare expensive cigars is Hype!

It’s all in the marketing baby!

Maybe I Am Vocaly Brutal?

Maybe I am a little brutal on these cigar manufacturers, but you who read my posts and watch my videos deserve a fare appraisal of the cigars I review!

They are asking you to shell out $30 for the Opus X Lost City and I think for that kind of money you should receive something exceptional!

Let’s consider the Lost City. I am not a tobacco grower and only have a rudimentary knowledge of the process, but Let’s look at something that I think should be brought into the equation.

There is a growing season for tobacco in the DR, which usually brings the harvest in around March. Why is that?

I would guess that it has something to do with that being the best time in the year to grow tobacco as probably proved over hundreds of years.

So that being the case, why would we expect that we would have a superior crop in late summer? Also, if they did somehow discover that something extraordinary happened, why haven’t all the other growers gotten on board with the idea?

Get where I’m going with this?

So they made it special, by saying it was special and a lot of people got on board with it!

I watched some other reviews after I did mine and none of the ones that I saw are jumping up and down shouting the praises of this cigar.

They basically have just said that it was woody and spicy, burned and drew well, guess what, I can get that all day long in an $8-10 stick. I can also get some pretty complex sticks in that same price range!

I don’t usually get on a rant to this extent, but come on, just because it’s rare, doesn’t mean it’s worth that much money!

Rare doesn’t necessarily mean good, take for instance Alec Bradley’s Fine and Rare (you can see my review of that cigar) coming in at the hefty price tag of $25 and they make a new rare and fine every year, how rare is that?

Jumping Off My Soap Box

OK folks, I will get down off of my soap box, before I fall off and tell you this: Like I always say, this might be a fantastic cigar to you, we all have different tastes.

I didn’t say that this cigar was bad, but I wouldn’t spend another $30 for one. I can buy three cigars that I know I will enjoy for that amount of money.

My Challenge To You

You may think that I am full of crap and you Love the Arturo Fuente Opus X Lost City cigars, my challenge is this: In the comments section below, drop me a line and let me know, what’s the hype?

Tell me why you think that this cigar is so special?

Everyone is of course welcome to respond below with questions or comments.

I welcome dialog, as a matter of fact Google loves dialog and will reward me handsomely in ranking if you have a conversation with me down there.

Until next time: Smoke On!