The other day I was at a cigar event at Club Humidor where they were featuring Crux Cigars. While wandering through the humidor, I noticed a rather large display of Ventura Cigars and ask Joe Torres about them.

I think what caught my eye was the colorful bands and boxes. Joe told me a little about them and since I had mentioned to him that I like a complex stick, he recommended the Archetype Sacred Scale, so we are going to do a cigar review or this cigar today. 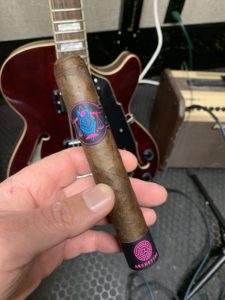 As is the case on several of the cigar company web sites, they neglect to tell you about the company itself, leaning more to their product line and events.

I was able however to find out a little about them through Cigar Aficionado.

Ventura Cigar Co. is a California-based cigar manufacturer known for premium brands like Psyko Seven, Project 805, Case Study and Archetype. The company is a subsidiary of Kretek International Group Inc., a large importer and distributor of various tobacco products. Ventura doesn’t have a factory of its own, choosing instead to contract the production of its brands with various well-known cigar companies, including Drew Estate (Archetype Axis Mundi), Oliva Cigar Co. (Archetype Fantasy Miniseries), La Aurora (Project 805) and Davidoff (Psyko Seven).

Some of you may remember that while I was at Sturgis last year, I did an on the street cigar review of the Psyko Seven, which I thought was a pretty good cigar.

That had been my only contact with Ventura until I smoked this Archetype Sacred Scales. Archetype is a series of cigars and I will endeavor to find and smoke more of this line, since I have been impressed so far.

As I said in the video, these guys cracked me up with their marketing of this line of cigars. They have created some kind of mystic story line to launch the series and then with each new introduction of a cigar they present it with some Psychobabble which I might have expected with the Psyko Seven, but with that stick, it was more of a retro flashback to the 70s hippy culture.

This is what they say about the Archetype series:

Archetype is inspired by the work of psychologist Dr. Carl Jung and mythographer Joseph Campbell who defined ‘archetypes’ as the constantly repeating characters who occur in the dreams of all people and the myths of all cultures. Campbell discovered through his study of world myths that the ‘Hero’s Journey’ is a common storytelling arc that has been retold in infinite variations since time began.

We invite you to share our journey and leave compromise behind.

This is what they say about the Sacred Scales:

Sacred Scales marks the inflection point in our hero’s journey, beginning their return to the real world from the imaginary. This unique blend is crafted by Cigar Master Ernesto Perez-Carrillo.

What is funny about this brand of marketing is that while I find it to be strange, I find myself being drawn in and wanting to sit and read all of it (which I don’t have time for)

What’s In The Sacred Scales

Flavor: Earth, Spice, Coffee, Black Pepper which was consistent throughout. Some flavors would fade out and then reappear.

I really enjoyed this cigar and would not hesitate to smoke another one, very flavorful throughout. Well worth the money I paid.

I hope you enjoyed this cigar review of the Archetype Sacred Scales.

Please feel free to leave comments, questions or suggestions in the comments section below.

Till next time, Light em up!