Some times I have mini adventures as I travel around the country and recently I had another interesting Alabama adventure where I had the privilege of meeting Brent at the Tobacco Shop in Dothan. Brents family owns the store and he is the manager 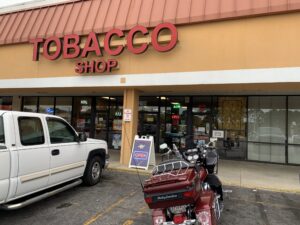 Brent is only 23 years old and has only been smoking cigars for three years, but is way beyond his years in knowledge and appreciation of the leaf. 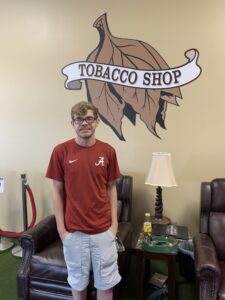 He started off as a bagger at this family owned business and three years ago he took over all the ordering and purchasing for their nicely stocked humidor as well as running the entire store which includes vapes and cigarettes to name a few things.

Brent has also taken it upon himself to attend Tobacconist University online and get his tobacconist certification.

I really enjoyed meeting this young man and our conversation was very stimulating. We talked a lot about cigars and the cigar industry. Since the FDA started enforcing new laws and threatening the entire industry a few years ago, it has been interesting to see the huge increase in young (mid 20’s) cigar smokers who have joined our ranks as brothers and sisters of the leaf.

What You Will Find At The Tobacco Shop

The Tobacco Shop has a very nice selection of cigars in their nice sized and well stocked humidor, many of the big names like Fuente, Drew Estate, Rocky Patel, Camacho, Perdomo and Oliva, as well as the boutiques like E P Carrillo, Steve Saka’s Dumbarton Tobacco and Trust, Deadwood Tobacco, Aging Room and LFD to name a few. 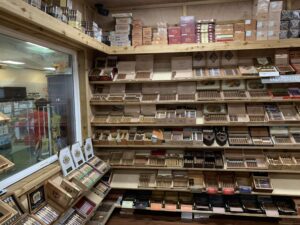 They also have a small lounge in the front of the store where I actually sat and smoked, while starting on this post. The lounge is not very big, but it is a nice touch and has comfortable seating. 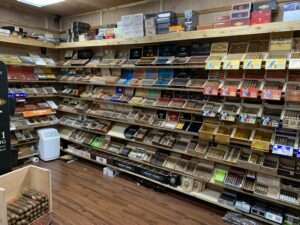 There is a TV and an aquarium for your viewing pleasure, as well as a large front window, so you can see any bad guys sneaking up (didn’t see any while I was there)! 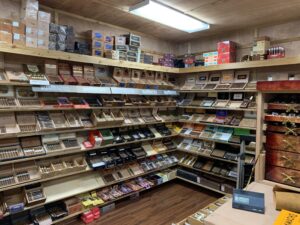 Because this is primarily a tobacco and vape shop, this was not a big cigar adventure, but I will tell you about how this adventure began. 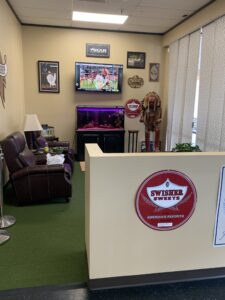 The first time I entered the store, no one was in the humidor, so I just helped myself and collected my purchase and went to have the cashier ring them up.

When I got to the counter, the clerk asked if anyone had assisted me in the humidor, and I said no one had, but they probably should have, since what I do is post about cigar shops and I gave him my card (maybe my ego was a little bruised).

What happened next is what inspired me to return and give them another look see. The next day, received an email from them inviting me back and suggesting that I meet Brent. When I returned and met Brent, I asked him about this and he said that he didn’t know anything about it, so what impressed me was that one of his employees too it upon himself to reach out to me, that to me shows loyalty and pride in one’s job. A rare commodity in today s workforce!

So Let’s Give em Another Shot

We were getting ready to leave Dothan, and I was out visiting the shops that I had been hanging out in and was on my way back to our camp and because there was construction on my normal route, I took the bypass.

When I got to a stop light, I realized that The Tobacco Shop was just ahead, so remembering the special invitation I had received, I decided to give em another shot and I was sure glad I didn’t move too fast and outrun my adventure. As a result, while not a big adventure, this did turn out to be a most excellent cigar adventure.

This is not the first time I have scored big, when I decided to give a place a second chance! You may remember my post Cigar Therapy, whereupon checking out Outmans in Greenville, SC for the second time, I had one of my favorite Cigar Adventures.

While this was not a grand cigar adventure, it serves to remind us that we should not judge a book by its cover, or another way to look at it, is that first impressions can be deceiving, or as my buddy Scooter Tramp Scotty so eloquently puts it, don’t move to fast or you might outrun your adventure.

If you find yourself in Dothan, AL, searching for another interesting Alabama Adventure I can highly recommend three cigar shops/lounges, not the least of which is the Tobacco Shop!

As always,  I do encourage your comments, suggestions and questions, which you can enter in the comments section below!