You just never know when a cigar adventure is going to happen. You could just be cruising along and decide to stop for a stick and WHAM!!! Your in an Alabama adventure at the Cigar Shoppe in Montgomery, AL 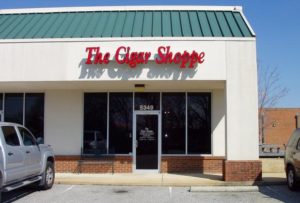 A few months ago, I was online and ran across a post from The Cigar Shoppe and I said to myself, cool, those guys were my first ever Cigar Pals post and I will definately comment on this.

I commented and didn’t think any more about it until a couple days later when I received a reply letting me know that I was probably responding to the wrong Cigar Shoppe.

We went back and forth about it a few time about how to remove my comment and then the voice, ok it was someone typing suggested that I come to Alabama and check out their shop. I responded that I would try to get by there and didn’t think to much more about it, since I wasn’t in Alabama at the time and had no immediate plans to go there.

Shortly thereafter I did find myself in Alabama, up in Athens where I found out about Truly Cigars. I thought about the Cigar Shoppe but when I looked at the map I discovered that Montgomery was about 180 miles from Athens and since I was working, I knew that wasn’t happening.

On The Way To Texas

Now we find ourselve on the way to Texas, because Texas has vehicle inspection in order to get registered, so every year I have to make the trek back wheather it lines up with my plans or not.

So when I started planning my route to Texas, I realized that I would be going through Montgomery and remembered the Cigar Shoppe and the invitation to come visit their place, and thought why not, it’s on the way.

We left South Carolina where we had been visiting my friend Rebel and four and a half hours later we were in Montgomery.

While it was still early in the day ( just after noon) and I’m thinking, I hate to stop this early, I remembered my motto to “not out run my adventure” and set the GPS for the Cigar Shoppe. Besides, I figured if it didn’t pan out, I could still make some miles.

Upon entry I was greeted by Doug the owner and I handed him my card. Before he even looked at it, he said, I know who you are, not on your bike eh?

I was a little shocked that he recognized me and later on I found out that he wasn’t the one who I had the discourse with online. He couldn’t remember why he knew who I was, but did know that I would usually be on my scooter. Because I had to take the truck to Texas and also that the weather was a bit unpredictable in Alabama at this time of year I was not on two wheels.

This did cause me to realize that a lot of what I have been doing lately has not been on the bike and I promise to remedy this in the very near future.

Doug gave us the grand tour after some chit chat and started with the humidor, which is always a good place to start. 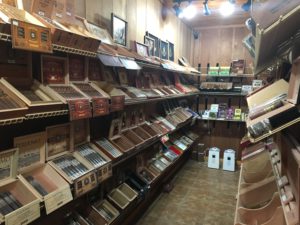 The humidor is not Large, but has some interesting selections. They tend to be big on Perdomo cigars here and several of the patrons that we would meet through the course of this adventure.

Doug has a lot of the top end names as well as some of the obscure ones that we don’t hear about very often. He does carry just about everything that Southern Draw has and most of Perdomo’s line up.

Like so many smaller cigar shops, he has to cater to his clientel and most don’t go for the high end sticks, so he sells a lot of cigars in the $4-10 range. This is cool though, you have to know your market!

The shop in front was very organized and easy to navigate. When Doug first opened the shop, he went to Nicuragua to learn as much as he could about the industry and being a photographer, he took a lot of pictures which he had framed and displays throughout the store. 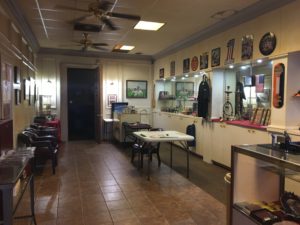 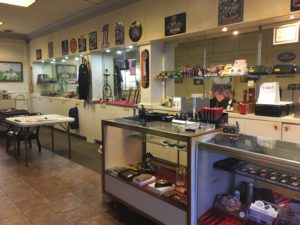 After we picked out what we wanted to smoke, Doug took us into the back room which was warmly lit, like a fireside room, with wood siding and tables and leather furniture.  There was a TV up on the wall in the corner of the room that was stationed on smooth jazz with just the right volume.

When we went in back, we met Bobby who was quite a character and fun to visit with. Bobby apparently is living off the grid in the swamp in a trailer with no imenities and yet can sit in a cigar lounge and hold a conversation about cigars and a variety of other subjects, proving once again that cigars are the great leveler.

There are lockers for the members and up above a cabinet across the room, there are bottles of liquor which belong to the patrons, the Cigar Shoppe is BYOB.

We sat visiting and people started trickling in. First were Jen and Billy. Jen works there, but has been unable to work recently due to a bad cold, which apparently has been going around and several of the regulars have been out sick. 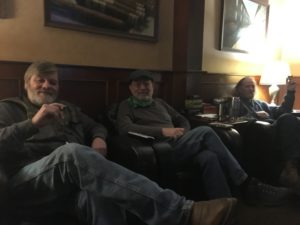 Me Doug and Billy

After being introduced to Jen, she informed me that we should try to make it on a Thursday night and as that was when they usually all got together and watched a game or played board or card games and usually had some type of pot luck dinner.

I said, hey, isn’t this Thursday and they said yes, but with so many out sick they hadn’t planned anything for that evening, but hoped that we would stop by on our way back from Texas. We assured them that we would and….

Nope, we didn’t leave, folks were still coming in and while this was not the biggest of adventures, it still rated as one!

Ok, So It Wasn’t a Wild Party

At some point late in the day we decided that we would spend the evening in Montgomery and started seaking out an AirB&B. I had decided the night before while staying in another over priced hotel, that I would try to go the AirB&B route whenever possible!

We would find a place and ask the locals about the area that they were in and after a while, Doug asked us what we were looking for?We said, just a room and bath is all we need and he invited us to stay at his place and we accepted.

That settled, he went to let his dogs out and we went to eat. When we returned we found that the lounge had a nice crowd and I introduced us to those who had come in since we left and the party began, or they would have probably said, continued, since we weren’t actually neccessary for them to have a good time.

I sat there talking cigars with Jason, who works there and is very knowledgeable and told me that he was a certified tobacconist from Tobacconist University, which is an accredited online university. I have taken some classes through them. 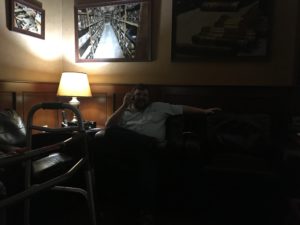 Also in attendance were Dave, a disabled vet and Tom, the resident master of sarcasm. 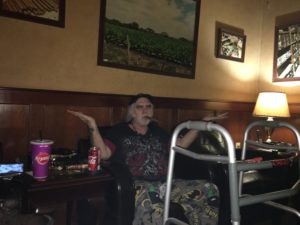 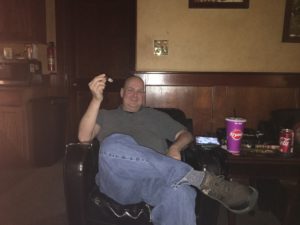 Then to round out the event, in walked Ron ( aka Jesus, due to his long hair and beard). That guy changed the whole dynamic of this little gathering as he grabbed his bottle and settled in, in what I assume is his normal chair in the corner. 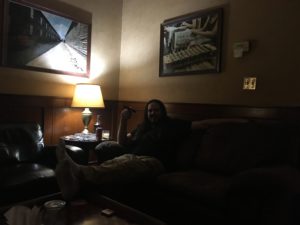 There were a few other folks that came in, and stayed for a while but I didn’t get their names.

So we sat around talking and I think Ron (Jesus) and I held court, but mostly it was Ron. He was hillarious and could converse on a multitude of topics. Music not being the least, as he has spent a good portion of his life as an entertainer.

The thing I enjoy the most when I find myself in these situtions is the way the conversation usually progresses. I goes something like this:

I’m sure I could have stayed longer, but we had been there since early afternoon and our host was getting ready to leave and while he indicated to us that we could  stay and he would just give us the adress, we decided to go ahead and leave with him.

This was cool because I got to spend more time with Doug, learning more about his shop. In the morning we got up and had coffee with him and of course, went out to the courtyard to have our morning smoke and talk about…..you guessed it, cigars.

One of the things that stood out to me at the shop was the way everyone just made themselve at home and we were encouraged to do the same.

I was afraid that this post would be short, but it turns out it is my longest ever, wow!

Also feel free to comment or ask any questions below!