Hi Cigar Pals: Todays smoke will be the Ace Prime Sergeant. I met Brian at the PCA (Premium Cigar Association) trade show in Vegas. Being a vet myself, I just had to ask him about this unique cigar. 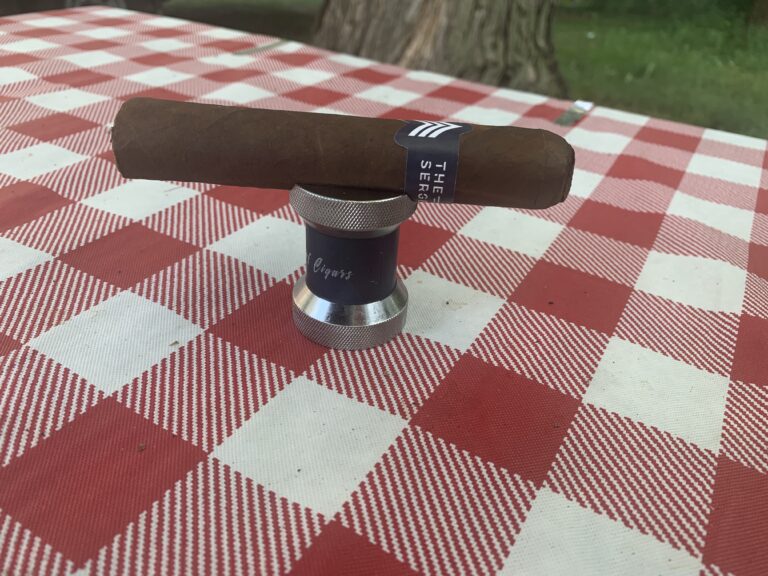 He explained to me that, while he may have been the face for this stick, it represents all of those who have served their country.

“I was Inspired by the life of my dear friend and US Marine Corp Sgt. Brian Acevedo, one of the most altruist and self-given persons I know.” Brian is the living example of what is to put the lives of others before your own, he has encountered peril many times and stood his ground. This cigar honors every man and woman who bravely committed to unconditional altruism” says Luciano Meirelles, Master Blender, President and Co-owner of Ace Prime.

“Luciano and I blended this cigar mindful that this product represents the most noble values of humanity and that’s why the hands and hearts involved into the craft of this cigar, everyone, understood the honor of being part of this project,” said Eradio Pichardo, master blender and co-owner of ACE Prime and Tabacalera Pichardo, via a press release.

Binder: Double Binder USA (Connecticut) The company says, it is not a broad leaf, but rather a hybrid seed.

Filler: Nicaragua, ligeros from Estelí and visos from Jalapa and Pueblo Nuevo

Burn: Nice even burn through the first third, nice white ash, had to touch up twice In the second third

First Third: Rye bread, dark chocolate honey and cayenne pepper, buttery creamy mix on the tongue, cayenne pepper gets stronger toward the end of the first, numbs my tongue

Final Third: At first it was about the same, but became very peppery about half-way through the final third and almost unshakable.

Notes: This cigar was better than the one I smoked the other day. Wasn’t happy that I had to touch it up twice, but that’s not a deal breaker, This cigar is short and the fact that the last two and a half inches was pretty rough, detracts from the appeal for me.

The Sergeant Fell Short Of The Mark

Here’s the way I have to think about this, folks I had two of these that were given to me at the trade show. The first one was absolutely terrible and I was glad that I had another one.

That said, This cigar had some real complexity to it and I have to give credit for that, but was it enough to make me want to spend my hard-earned money and possibly have to fight with it, probably not!

I also kinda resent the fact that with the Sergeant, they are playing on our patriotism and I feel like, if they are going to do that, then it should be a consistent, nice cigar.

The bottom line is this…. I probably would not purchase this cigar again. There are too many cigars out there on the market competing for my dollars to mess around with something like this.

I think that the military theme alone would be reason enough to set the bar higher and realize that expectations would be raised for this cigar. I know other veteran owned companies that make several quality cigars that consistently meet my expectations.

Truth is Ace Prime’s The Sergeant fell short of the mark for me, I was hoping for much more in this cigar review!

Please let me know if you have had similar, or maybe a better experience than I did.